A Fascinating Liquidmetal Patent from Apple Surfaces in Europe 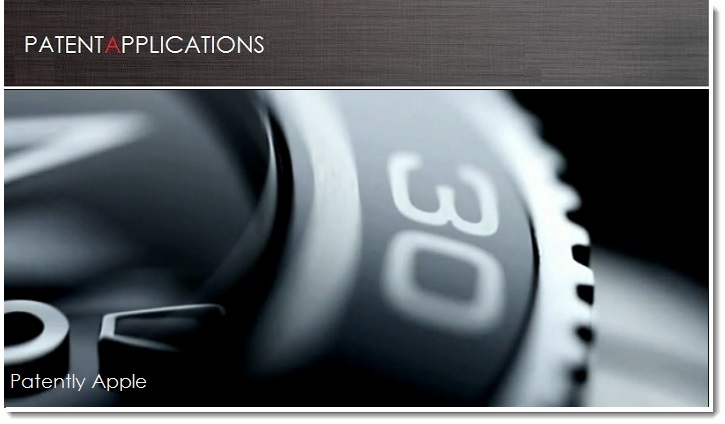 Every once in a while I check out various databases around the world for new trademark and patent filings and every now and then I'm rewarded by finding something interesting or something that somehow slipped through the cracks. One of these surprises has once again surfaced and it's an interesting one that touches on the subject of Liquidmetal. The Material's extraordinary ability to bond contrasting materials together with stunning precision will no doubt provide Apple with the ability to create a series of future devices that will be seen as aesthetic wonders. And within this patent application we learn a few new twists about Liquidmetal. And to top it all off, Apple provides us with an interesting list of possible products that could be aesthetically and functionally enhanced by using this exotic material in the future.

Apple's patent application provides us with a basic overview of Liquidmetal Technology. Apple states that "bulk-solidifying amorphous alloys, or bulk metallic glasses ("BMG"), are a recently developed class of metallic materials. These alloys may be solidified and cooled at relatively slow rates, and they retain the amorphous, non-crystalline (i.e., glassy) state at room temperature. Amorphous alloys have many superior properties than their crystalline counterparts. However, if the cooling rate is not sufficiently high, crystals may form inside the alloy during cooling, so that the benefits of the amorphous state can be lost.

Furthermore, one of the challenges with the fabrication of bulk amorphous alloy parts is partial crystallization of the parts due to either slow cooling or impurities in the raw alloy material. As a high degree of amorphicity (and, conversely, a low degree of crystallinity) is desirable in BMG parts, there is a need to develop methods for casting BMG parts having a controlled amount of amorphicity.

Some of the secrets behind controlling bulk metallic glasses (BMG) were patented by Liquidmetal Technology. This is the technology that Apple was granted access to in a special agreement. Specifically, on August 5, 2010, Liquidmetal Technologies, Inc., a Delaware corporation ("Liquidmetal"), entered into a Master Transaction Agreement with Apple.

The patent then dives into the science behind the bulk metallic glasses that would make a scientist giddy while quickly putting the public to sleep. Some of the sub-headers in this segment of the patent covered Metal, Transition Metal, non-metal, Phase, Alloy, Amorphous or non-crystalline solid and amorphous alloy or amorphous metal.

Of course the part of the patent that matters most is finding out what Apple is planning to make with this exotic material. So as to not interpret something wrong, the following is stripped right from the patent without any modification whatsoever.

"The embodiments herein can be valuable in the fabrication of electronic devices using a bulk metallic glass (BMG). An electronic device herein can refer to any electronic device known in the art. For example, it can be a telephone, such as a cell phone, and a land-line phone, or any communication device, such as a smart phone, including, for example an iPhone™, and an electronic email sending receiving device. It can be a part of a display, such as a digital display, a TV monitor, an electronic-book reader, a portable web-browser (e.g., iPad™), and a computer monitor. It can also be an entertainment device, including a portable DVD player, conventional DVD player, Blue-Ray disk player, video game console, music player, such as a portable music player (e.g., iPod™), etc. It can also be a part of a device that provides control, such as controlling the streaming of images, videos, sounds (e.g., Apple TV™), or it can be a remote control for an electronic device. It can be a part of a computer or its accessories, such as the hard drive tower housing or casing, laptop housing, laptop keyboard, laptop track pad, desktop keyboard, mouse, and speaker. The article can also be applied to a device such as a watch or a clock."

Now, didn't that narrow it down for all of us? Well of course not, that would take all the fun out of the anticipation of what's to come. Yet Apple did cleverly mix up what could be classic and what could be a new product category or two.

On one hand, you have the obvious targets like the iPhone and iPad while on the other hand, they hint that we could see a few possible new entries such as a watch, a TV monitor, a game controller or a wearable computer. Yes, it would be cool to see this exotic material end up in a future iPhone, wrist band computer or a competing Google Glass type of product.

The video shown below is about Liquidmetal and the beginning verbiage states that "this bezel is an aesthetic wonder, a technical marvel, an unlikely composition of two dramatically contrasting materials …"

A huge segment of Apple's patent is all about two or more parts devices being intimately bonded together. In one part, Apple specifically states that "The bulk-solidifying amorphous alloys can form a mechanical lock between a plurality of parts to create an intimate seal between the two parts. In one embodiment, the seal can serve as a bonding element between the parts." This is one aspect of the process that the video is really good at spelling out in plain English.

"Depending on the application, the respective articles that are joined together using a mechanical interlock can be made of any material. For example, the material can include a metal, a metal alloy, a ceramic, a cement, a polymer, or combinations thereof. The part or substrate can be of any size or geometry. For example, articles can be shots, a sheet, a plate, a cylinder, a cube, a rectangular box, a sphere, an ellipsoid, a polyhedron, or an irregular shape, or anything in between. Accordingly, the surfaces of the articles upon which the mechanical interlock is formed can have any geometry, including a square, a rectangle, a circle, an ellipse, a polygon, or an irregular shape."

In some embodiments, the article surface can have a roughness of any desirable size to facilitate the formation of the mechanical interlock. For example, the first article can be a bezel for a watch or an electronic device housing with an undercut."

Liquidmetal could provide iDevices with Wear and Corrosion Resistance

Further into the patent filing, Apple states that "the absence of grain boundaries, the weak spots of crystalline materials in some cases, may, for example, lead to better resistance to wear and corrosion. In one embodiment, amorphous metals, while technically glasses, may also be much tougher and less brittle than oxide glasses and ceramics.

Apple adds that in another embodiment, "the additional, optional element is at least one of cobalt, manganese, zirconium, tantalum, niobium, tungsten, yttrium, titanium, vanadium and hafnium to form carbides and further improve wear and corrosion resistance." You know, I almost had that for breakfast this morning (ha!).

Liquidmetal could provide iDevices with Waterproofing

The last point of the patent touches on how Liquidmetal could be used to waterproof future devices. Apple states that "in one embodiment, the mechanical interlock can be used to connect and bond two parts of the housing of an electronic device and create a seal that is impermeable to fluid, effectively rendering the device water proof and air tight such that fluid cannot enter the interior of the device."

This is exemplified in patent figure 8 below. Apple states that "In one embodiment wherein a thin bulk-solidifying amorphous alloy material is used to form the seal, the seal can simultaneously function as a bonding element that bonds the two parts together, and as a hermetic seal. A hermetic seal can refer to an airtight seal that also is impermeable to fluid or microorganisms. The seal can be used to protect and maintain the proper function of the protected content inside the seal." 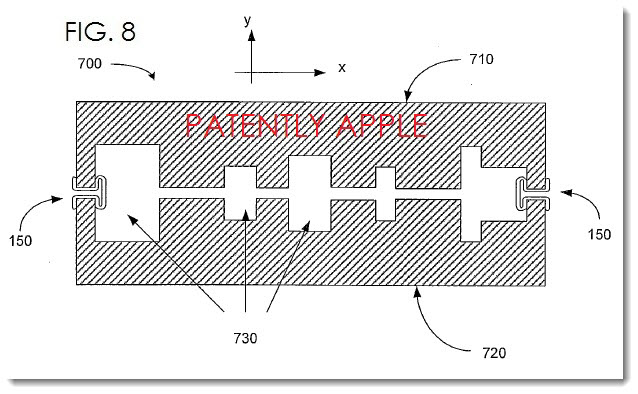 Apple states that "Conventional bonding techniques for these types of materials do not provide the inventive mechanical interlock 150 [noted above in FIG.8], and consequently, allow for significant relative movement in the x direction, which can cause fatigue and failure of the joint. The mechanical interlock of the preferred embodiments restricts such movement, and because of the amorphous nature of the alloy material used to form the joint, permits some movement due to differing thermal expansion coefficients, physical movement, and the like, without causing fatigue or failure of the interlock."

Apple's patent Figure 8 noted above also illustrates one embodiment in which an article is formed that includes a first article 710 and a second article 720. These articles may be, for example, stacked printed circuit boards providing through or via holes 730 for disposition of circuit elements, or may be stacked fuel cells with openings 730 for passage of fuel or air. The respective openings 730 may of the same or different shape.

Did they just state fuel cells? That's an interesting little nugget. In fact the International Electrotechnical Commission published a report in February saying that fuel cells are poised to power mobile devices. And let's not forget that Apple filed a patent about fuel cells back in December 2011. Apple using Liquidmetal to seal the fuel cells and yet leave an exacting opening for air and/or fuel would be one of the brilliant means of using this exotic material.

In summary, Apple's European patent filing provided us with a grand overview of what Liquidmetal could bring to the table for future iDevices. It presented us with a list of products where Liquid may apply. It also outlined how Liquidmetal could provide certain future Apple products with added wear and corrosion resistance as well as true water proofing. And lastly, we learned that Apple could design future iDevices with fuel cells and that Liquidmetal could provide a perfect encasement for safely housing the fuel cells while providing an exact opening in the devices to support the need for air and fuel.

Apple's patent was published earlier this month in Europe under serial number 12/984,440 which was originally filed in Q1 2011. Considering that this is a patent application, the timing to market of such an Apple product is unknown at this time.

Our Other Liquidmetal Reports on Record

Behind Apple's Stunningly Crafted iPhone is a Patent

what a bizarre statement. If Apple decides to introduce a new method of design functionality and aesthetics, it's to enhance a product to help it sell.

Apple, under Steve Jobs, made design a priority. So yes, it could help their bottom line, but it doesn't have to. It's about creating a superior product. Of course I don't expect an Android head who likes a plastic cased Galaxy to understand that value.