In March 2010 Apple acquired the "iPad" Trademark from Fujitsu and that secured the trade name in the US. Apple lists it as registered trademark here. The iPad trademark wasn't secured in China until Apple settled in court in November 2012. So with Apple now owning the "iPad" trademark in China and the US, why is USPTO's Examining Attorney Lee-Anne Berns now refusing Apple's "iPad mini" trademark application? One given reason is that identities such as IP Application Development and Marc Angell have applied for the "iPad" trademark in 2010 under applications 77923051 and 77913563 respectively and therefore there's a "likelihood of confusion between these marks." Why would there be any confusion when Apple owns the iPad trademark and the associated product just happens to be the bestselling tablet computer on the planet? Secondly, Apple commonly provides USPTO with their appropriate product website pages as a specimen. It's never been refused until now. This aggressive examiner is claiming that the specimen for the "iPad Mini" shown here, isn't valid. Our report presents you with the full UPSTO accounting for the refusal of the iPad mini trademark so that you can view and judge it for yourself. 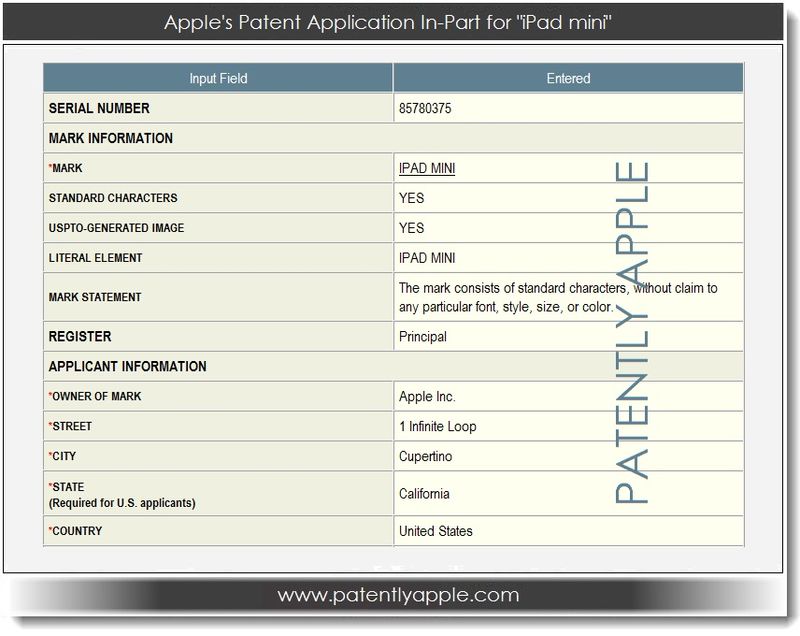 The notice presented above was originally sent to Apple in January 2013 and yet only made public in the last day or two. Note the database entry in the graphic below that's at the top of the list. To put the date of the entry into context, being that it doesn't list a date, note Apple's trademark certificate number 4309109 as the fourth entry. We covered that RTM in a report on Wednesday March 27 as you could review here. That establishes the timeline as being after March twenty-seventh. The delay in making this notice public is certainly odd.

Apple has certainly had a rough ride with establishing the iPad and now iPad mini trademarks. That's the process and that's the way it goes. Apple could still save the trademark with changes made to it.

At the end of the day, do you think that the examiners reasoning for refusing Apple's current iPad mini application as noted above as being fully justified? Send in your comments.

Funny, we're supposed to think that Forbes found this report after being widely reported from patently apple yesterday. Who knew that the mainstream press were such ripoff artists. They didn't do the research but love to take credit for it. Shameful.

I can understand refusing to not trademark "mini" by itself but as a product identifier such as "iPad mini" it's clearly stating that there's a smaller version of the larger iPad.

Apple owns the trademark for "iPod nano" which was allowed and what's the real difference between mini and nano? It's just denoting a smaller version of of another full sized standing product. One is allowed and the other not. How stupid is that?

It appears that USPTO just has a policy of some kind when it comes to the word "mini" associated with a product. The "Mac mini" isn't a registered trademark either, showing their stupidity is at least consistent. But that doesn't say much, does it.