The Dominator: ABI Research Predicts iOS will Capture 75% of Mobile Apps Market in 2013

ABI Research's London Office has just released their forecasts for 2013 in respect to winners in the mobile device applications space. Their research predicts that mobile users will download around 14 billion tablet apps during the year and that Apple's iPad running iOS will lead as a development platform with a formidable 75% market share. But it's not all smooth sailing for iOS. ABI now forecasts that smartphone-focused developers will adopt an Android-first strategy by years' end and that Android will account for 58% of the app market for smartphones.

If statistics interest you, then you should also check out IDC's latest five-year forecasts for the traditional PC market. In short, they predict the PC sector will slightly drop again in 2013, but not enough to the move the needle much. Then again, considering that the second half of 2013 could enjoy a boost from next generation Convertible Ultrabooks, the forecast could be slightly on the wrong side of the ledger. 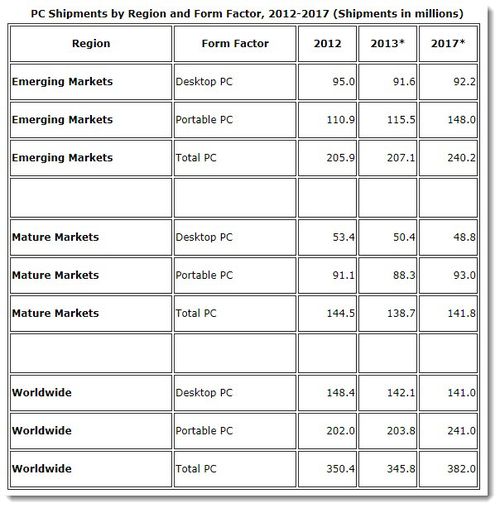 My point is simply that revenue share and not download share will likely continue to determine developet prefences . Why should developers switch to an Android -first strategy when the money is elsewhere?

ABI stated that Apple would have 75% of tablet market for apps. So what's contradictory? When 75% of smartphone are Android based, having a 58% share for App is more than feasible.

Since ABI estimated last November that "they believe" Android developers' share of the annual app revenue is "around one-third" of the total, then it is unclear why they now predict developers will pursue a Android-first strategy by the end of the year. That would imply a massive increase in Android-generated income, sufficient to overcome the current iOS-first strategy.

But is that realistic, particularly in light of the continuing strength of the iPad, whose apps can be sold for a premium? And in light of the fact that the fastest growing Android geographical regions are likely in the less developed parts of the world, whose new users are less valuable to developers?
In sum, I do not find the ABI faith in Android's growing financial allure all that plausible