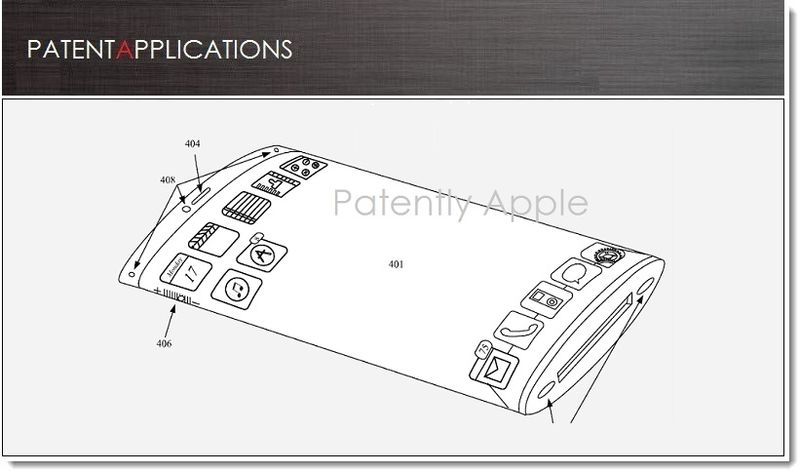 On March 27, 2013, US Patent & Trademark Office published a patent application from Apple that reveals a stunning future iPhone with a wraparound display so that both sides of this iPhone will be able to display content either individually or as one continuous display. The wraparound display will also apply to Apple's possible future wristband communication device or iWatch revealed in February. Today's invention focuses on the flexible wraparound display that could be fashioned in aluminum, aluminum and glass or a fully transparent design. This future iPhone design won't have any physical buttons so controlling the audio on the iPhone will simply require you to hover your hand over the side of the display to temporarily illustrate the controls. The new design could also produce 3D visuals through its unique dual display design. This is certainly one of Apple's hottest inventions of the year.

In the last few years the functionality of portable electronic devices has increased exponentially. Further improvements maybe realized by investigating ways to maximize the utility of unused portions of these devices. Form factor is an interesting area for development given that a large majority of portable electronic devices have settled into a standard form factor; namely a flat planar form factor with a display on one side and an opaque housing which contains the electrical components covering the rear surface of the device. Unfortunately, this popular form factor, leaves the sides and rear surfaces of the device unused or at best configured with buttons and switches with fixed location and functionality. Since many of these buttons and switches have fixed functionality they cannot always be incorporated into third party applications.

Apple's invention describes various embodiments that relate to an apparatus, method, and computer readable medium for creating a portable electronic device with a wraparound display.

In another embodiment, a method for assembly of a multi-display portable electronic device is described. The method is carried out by performing at least the following operations:

An iPhone with Wraparound Display 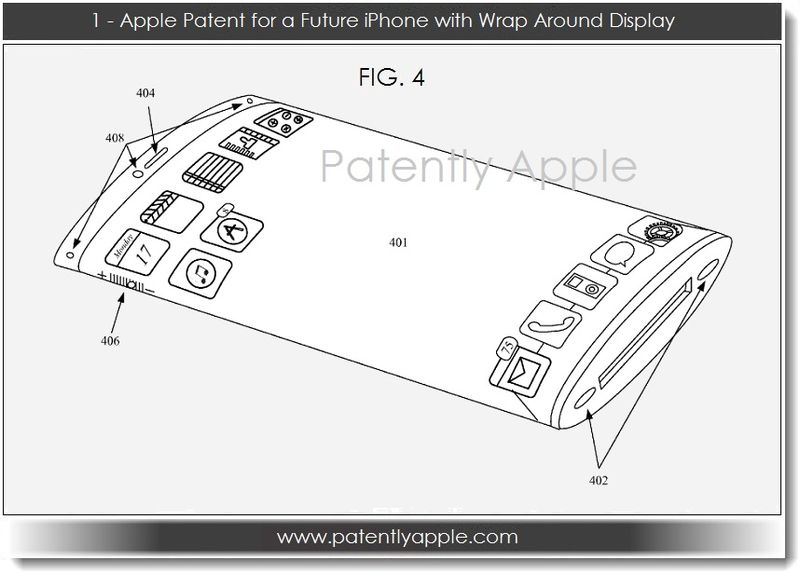 Apple's patent FIG. 4 shows a perspective view of a possible future iPhone design with a wraparound display which substantially increases the available display area that can be used for display of icons, data, images, video and such. Note that while the design is illustrating an older 30 pin connector, Apple's Lightning had yet to be announced. Patent illustrations are to represent a general overview and not necessarily the exact design. We can fully expect Lighting to be implemented should Apple use this design in the future.

For example, as shown in FIG. 4, up to five application icons can be presented across the span of the width of display 401. Microphones 402 and speaker 404 support the device to be used as a future iPhone.

Furthermore, virtualization of the physical buttons allows for expanded functionality. For example, volume control 406 can be located at roughly the same position it would be if it were configured as a physical button; however, in this configuration the actual volume setting can be seen at any time (indicated by the circle between the + and - indicators). Additionally, by holding a finger over the volume indicator an action could be triggered expanding the volume control over the entire left side of the device.

Additional features that can be well suited for this design include various cameras. It should be noted that since the future iPhone can present visual content in any direction, it is important for the iPhone to be able to determine a current location of the end-user. In this way, any of the cameras can periodically capture an image and using basic facial recognition software, one or more of cameras can be used to track the movement the end user's face in the space around it and as such be able to determine a general direction of the end-user and the field of vision of the end user and adjust the presentation of visual content by display accordingly.

The iPhone's Body could be Aluminum or Optically Transparent Glass

Apple's patent FIG. 1A illustrated below shows the housing 102 alongside representative flexible display assembly 104. The housing can take many forms and can be multi-part in which a portion is metallic in nature (such as aluminum) whereas another portion can be formed of optically transparent material such as glass. Apple states that the design could also be fully formed of transparent (or at least semi-transparent) material such as glass. 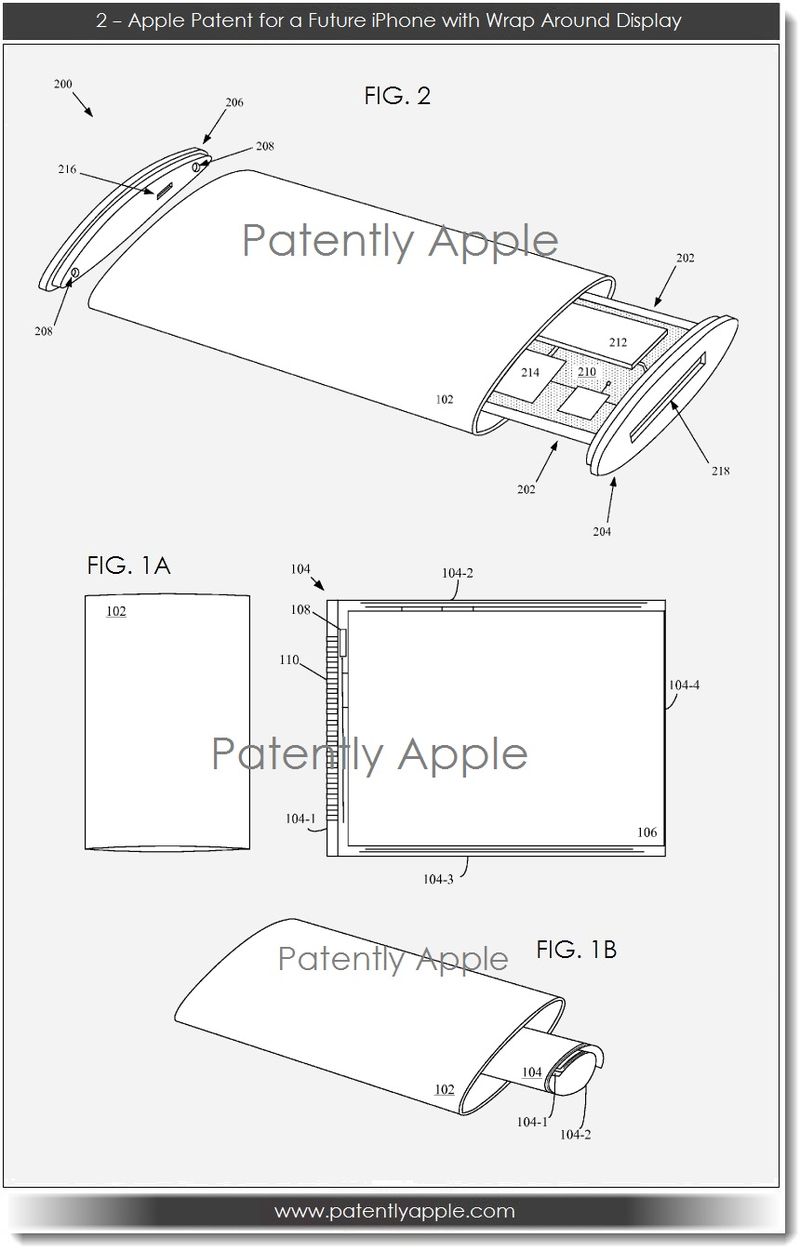 It should be noted that glass has been used in a wide variety of products, including electronic devices, such as watches and phones.

Apple's patent FIG. 2 shows a perspective view of this future iPhone as internal components are being inserted into transparent housing. 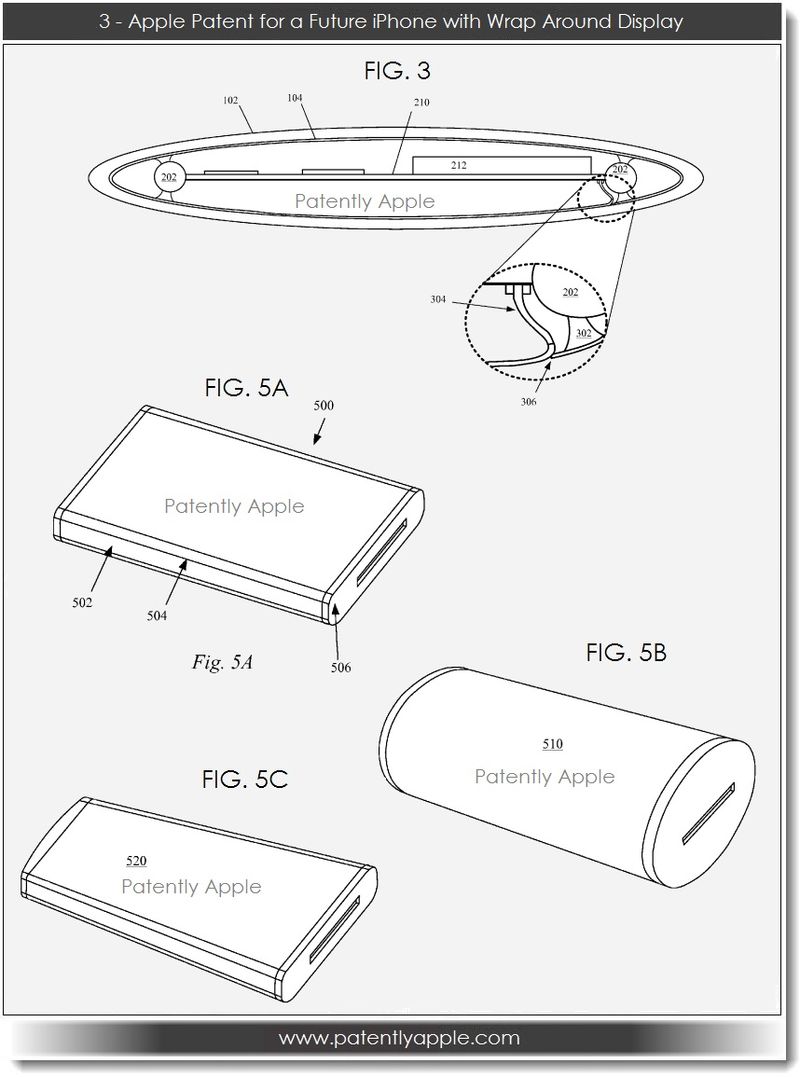 Apple's patent FIGS. 5A, 5B, and 5C illustrate a variety of additional representative form factors. 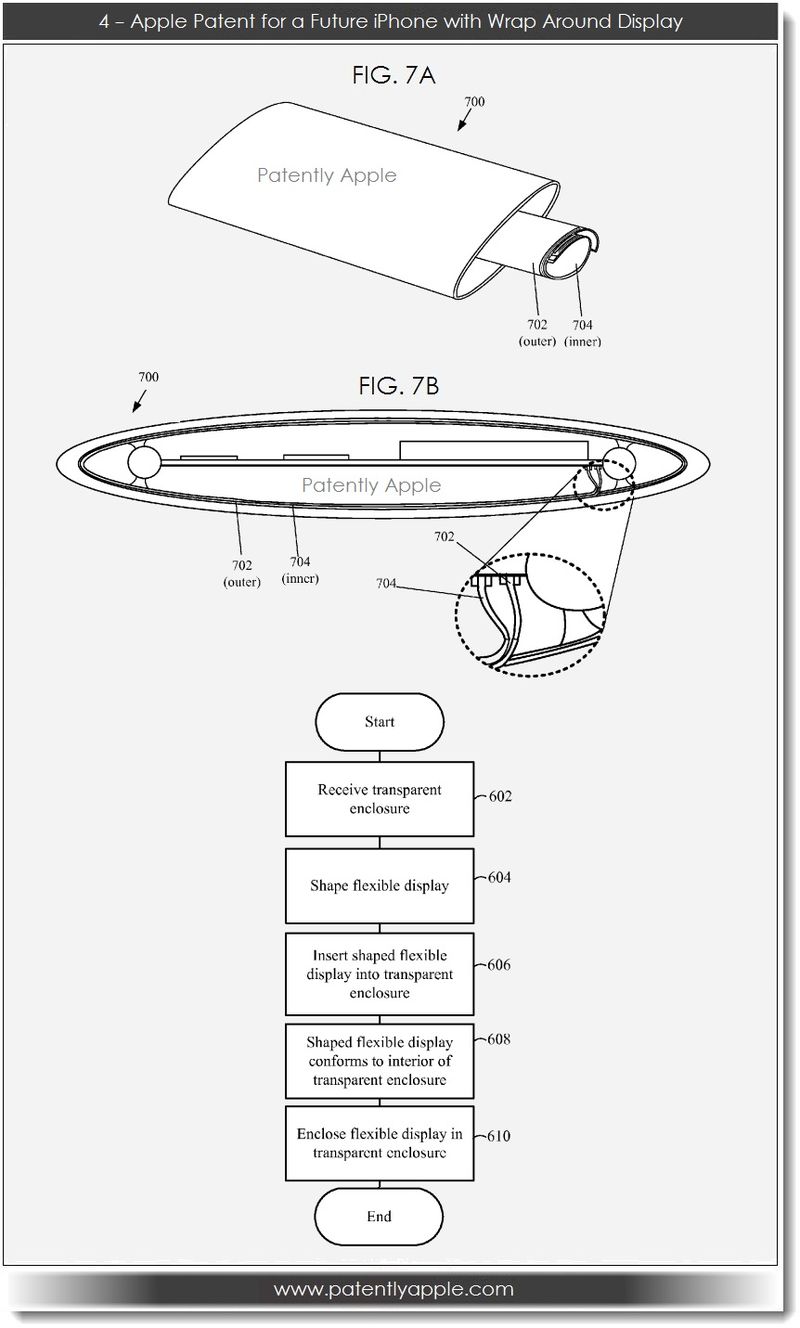 This Future iPhone May be able to Deliver 3D Experiences

In one embodiment, utilizing a flexible display can provide additional viewing area without increasing either the size or shape of the electronic device. For example, a flexible display can be folded in such a way as to form a continuous loop such that images (still or video) can be presented in a wrap-around manner in which the images appear to be presented in a continuous loop.

Apple credits Scott Myers as the sole inventor of this patent application which was originally filed under serial number 245646 in Q3 2011. Patently Apple's report is based on Apple's Detailed Description of the patent. See Apple's patent to review its claims. Considering that this is a patent application, the timing to market of such an Apple product is unknown. 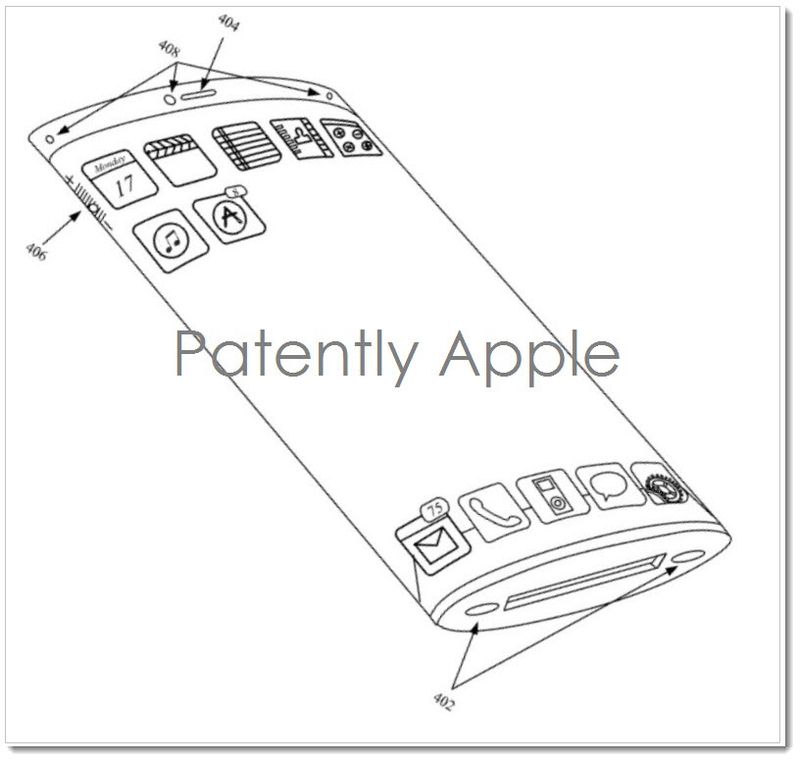 The pictures shows a 5 icons per line vs 4 today.

This would be the greatest thing ever. If this happens, samsung should just stop making phones... or anything.

Of course not Red. We noted that the patent application was filed prior to Lightning being introduced. Of course if Apple decides to use this design in the future it will utilize the latest connectors.

Keep in mind that patent application illustrations are not design patents and don't have to be exact in presenting an idea.

It shows the old 30-pin dock connector. Surely Apple wouldn't go back to that.