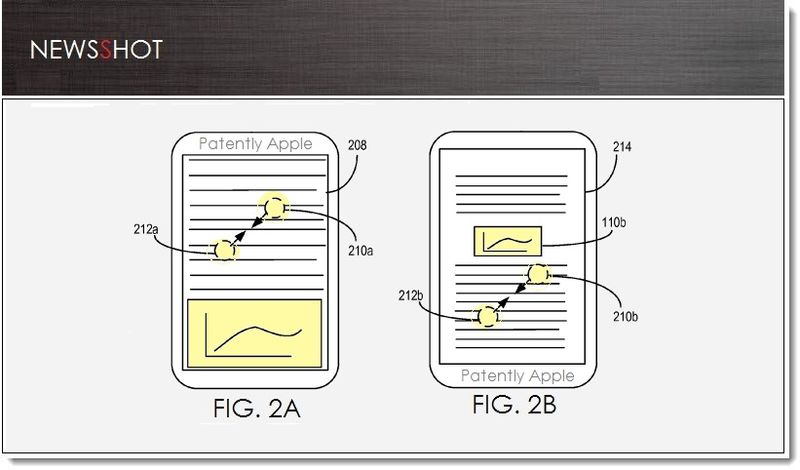 Some have dreamt of Apple's "Pinch to Zoom" patent having been invalidated but that's not really the case. Apple can and will definitely appeal that ruling and the historical statistics are in their favor that the invalidation won't stand. It's understandable why Google, their ecosystem and even Microsoft would love this patent to be invalidated, because it's one of those perfect features that you have to have in order to be a modern day touch-screen computer. Well that doesn't seem to faze Microsoft in the least. A new patent application published by the US Patent Office this week shows that Microsoft's delusional engineers think that they've actually invented Pinch and Zoom as if Apple's technology never existed. If you think I'm kidding you, I assure you I'm not.


I'll keep it simple. Our cover graphic illustrates a graphic being reduced to size by the Pinch and Zoom feature. Here's what Microsoft describes in their filing:

"In FIG. 2A, the display 208 displays a portion of the first page of the document. As evident, the mobile device is displaying the entirety of the chart which was present on page one, but not the entirety of the first page. In order to provide context for the user as to where they are within the content, the user can indicate a "pinching" motion for zooming out of the content. The pinching motion is illustrated in FIG. 2A as two dotted line circles 210a, 212a, which represent locations where the user is touching the touch screen, and simultaneously moving their fingers together. The application interprets this as a zoom-out indication. In FIG. 2B, the mobile device 202 then presents the document in display 214. As can be seen, the chart 110b is still present, but at a smaller size.

The user can also indicate a pinching motion to zoom-out at this point when the display associated with FIG. 2B is shown. The pinching motion is illustrated in FIG. 2B as two dotted line circles 210b, 212b."

Okay why drag it out, you get the point. Microsoft is trying to patent Apple's already patented Pinch-to-Zoom concept. What's funnier, is that Apple just gained a new Pinch and Zoom granted patent earlier this week.

Perhaps it was a "just-in-case" maneuver on the part of Microsoft's legal team should Apple's appeal fail. But on paper, it sure looks like the kind of legal maneuvering reserved for slime bags to me. What are your thoughts on this?

The whole patent system seems to be a joke. Samsung has been found guilty of infringing on several of Apple's patents and little has been done. By the time appeals are done they have discontinued the products and moved on to other devices. The only people that seem to benefit are attorneys and the companies that copy the innovative products.

There's no way to stop companies from shamelessly copying others, the only thing you can do is to try to slow them down with patent litigation.

Microsoft's entire business has been built on copying every last move Apple makes to the most minuscule iota. This method was phenomenally successful in the past - coupled with Gate's penchant for disregarding every single rule of honest business practice, or honesty even as an abstract concept.
Unfortunately for Microsoft, those simplistic childhood notions we've had of honesty and moral worth still seems to have some strange effect on human affairs. They spent so long trying to suction up all their competitors creativity and assimilate the entire tech industry, that eventually they got sucked up into their own a-hole.
Now it's dark and hot in there apparently, and it smells of sulphur and brimstone, and strange things go bump in the night. But without a change in mindset, it's just one long smelly death that never seems to end - but that's microsofts fate, and they earned it. They will keep on copying and disregarding fair business practices to their last breath, praying no one notices...hopefully one day creating good by serving as a reminder.

Gates at the campus during an unguarded moment

I don't see how it could ever get granted...