Is it Time for an iOS Facelift and will Apple Ever License iOS?

In the last few days I've heard more people weighing in on whether Apple should license iOS than I've ever before. Although hell froze over once, I doubt that Apple will ever see their way in doing that. Even if there are good reasons to licence, it's not going to happen. On another front, I wonder aloud, is it time for Apple's iOS to undergo a facelift to reinvigorate the iPhone's user interface.


Is it Time for Apple to reinvent their iDevice Home Screen?

In 2011 Microsoft gave the world a peek at their all-new operating system Windows 8 and more importantly, the then dubbed "Metro" Interface. Windows 8 may take time to gain traction, but that's a story for another day. For this discussion "Metro" was a ground breaking view of a modern mobile OS interface. The one attribute of the new interface that was striking was their vision of using live tiles. Jensen Harris, Director of Program Management Windows User Experience who is in charge of their "Metro" interface stated at that time that Icons are yesterday's way of representing apps. They're antiquated they're not alive, they're not interesting, they're not helpful, they're just a picture and a line of text. And they were fine in the early GUI era, but in today's world they're antiquated." 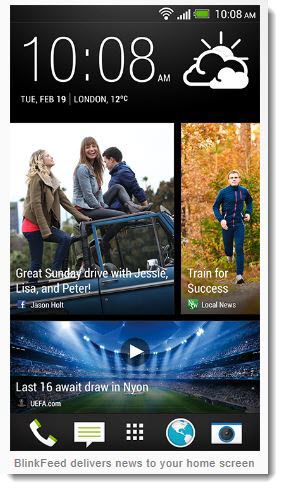 In a new HTC blog entry posted on Thursday, HTC's team talked about their new home screen design for the HTC One. They listed some of the research patterns that their R&D team discovered that influenced the changes that went into their new design. The key points that they shared were as follows:

The rest of the blog entry is just filled with typical company salesmanship to support their design form factor and features.

Keep in mind that HTC's research was, well, internal research about their customer base's use of apps and widgets. It wasn't scientific nor from a reputable source such as Gartner, IDC or ABI.

And let's face it, HTC and/or Google can't boast of 40 billion downloads from the most popular app store on the planet – so what are they supposed to say? HTC's own user base research proves that they're not that savvy compared to Apple's users who factually download more apps and utilize the net more than any other platform. So technically speaking, their so-called "research" doesn't really pass the laugh test.

And yet with that said, I confess to liking the tiled based home page. I use four or five apps daily and little more. So I wish that my Home Screen could be customized with just those apps that I want in the size and color that I want along with pictures and more. The rest of my apps that I occasionally use could simply be placed on my iPhone or iPad's subsequent screens.

According to Apple's intellectual property, they've been experimenting with a 3D version of iOS and toying with spiral concepts for iDevices or wearable computers such as an iWatch. And yet the simple idea of customizing my iDevice's Home Screen appeals to me more.

The app concept won't be going away anytime soon and those laughing at it aren't enjoying Apple's profits. So who's laughing now? But that doesn't mean that it isn't time for an interface facelift. With Jony Ive stepping in to the shoes of VP of software, is now the time to be expecting a change in our iDevice's Home Screen UI? Maybe, maybe not, but I'm hoping to see a refresh towards home page customization sooner rather than later.

Oh No, Not this Argument Again: Should Apple License iOS?

The subject of Apple licensing their operating system comes up every once in a while and we know that Apple will never do it, even if there's logic to support it. Arguments rage on and nothing ever changes – and it likely never will. Apple's feet are in cement. They're locked into a philosophy beat into them by the late Steve Jobs and no one is likely to ever, ever break with the past. And yet Apple could have successfully nuked Android out of existence by simply licensing iOS out to a few elite partners in place of going to war using the courts. And if truth be told, Apple's ego got in the way of annihilating their only competitor when they had the chance to do it. Is this déjà vu all over again?

Yesterday Daring Fireball's Gruber wrote a report titled "Open and Shut." His report basically covered The New Yorker's article by Tim Wu titled, "Does a Company like Apple Need a Genius like Steve Jobs?" The article was a discussion over how open systems beat out closed computer systems with his prime example being how Windows defeated the Mac.

Yet in the big picture, the article actually pointed to the historical strengths of closed systems by referring to such successful companies such as IBM, AT&T, the old Hollywood studios, Disney and others. Of Course Apple, under Steve Jobs, would be another to defy the open is better than closed business theories of our time.

Yet without Steve Jobs at the helm, the article basically suggests that Apple, now being run by "mere mortals," may face an unpredictable future and run into the economics of error which makes choosing an open system better for the future.

Gruber's report decidedly takes on Wu's article point by point. While it's a good read, it was hard to agree with Gruber on a number of his points that appeared to take on a revisionist's point of view.

In one part Gruber states that "Apple's and the Mac's problems in the '90s had nothing to do with Apple being more closed and everything to do with the quality of the products." Well, there would have never been a Windows operating system to begin with if Apple would have opened their OS to other OEMs. Gates, who was happy with supplying software for the Mac begged Jobs to open up their OS. Gates and his crappy software went on to absolutely crush Apple. And, if it wasn't for Bill Gates investing $150 million in Apple in 1997 and a government monopoly case looming over Microsoft's head to play nice, they would have annihilated Apple plain and simple, end of story. Any other view of this is revisionist thinking or wishful dreaming.

Another off-beat Gruber statement came about when discussing Apple opening up their OS to cloners "nearly bankrupted the company." Ah yes, blame the cloner philosophy resurfaces. In reality, Apple was collapsing in the mid-nineties from years of useless OS upgrades that were so behind what a modern operating system was to be that it was truly embarrassing. That's why Apple desperately considered using Microsoft's NT kernel for a new multi-tasking OS, then BeOS and finally NextStep (or OpenStep). Moving desperately to use cloners at the very last moment when the company was in free-fall should never be an example of what opening Apple's OS would mean from a point of strength like they enjoy today.

In the end, while there are a number of positives for opening Apple's iOS to a few elites in the industry, it's so remote a chance of ever coming to be that's it's not even worth discussing. It's like arguing with the wind. Apple's current or future CEO will always be haunted by the philosophy that Steve Jobs engrained into their culture and that's the end to that story no matter if we agree or disagree with licensing Apple's iOS.

Larry, that's why I framed the argument around "opening Apple's iOS to a few elites." Meaning I don't think licensing to everyone works either. I don't think there's a rule that it has to be no licensing vs wide open licensing. Apple could control who they license to and what the licensees could cover or expand into or not. But again, you could spin this ad infinitum and get nowhere. That's why I said it's like arguing in the wind. It's an interesting argument on both sides of the coin, but it's a futile argument because it's never going to happen.

How did the cloning work out in the PC world? It provided a lot of choices for consumers, but as a business it ended up being a race to be bottom with low margins. (Even before the iPad came long to take away users.) A similar thing is happening in the Android world, where only Samsung is profitable.

I was being a little flippant. My view is that Apple from about 1989 until 1993-1994 had a large enough window to have beaten Microsoft on x86 before Microsoft released Windows 95 which was their breakthrough OS. Scully acknowledged that his biggest mistake was not taking Andy Grove's offer to move to x86 in time.

But with Apple purists like Jean-Louis Gassée fighting to make sure that Mac OS would never move to x86, Apple never stood a chance. History says that Apple could have made the switch and purists made sure it never happened. You could argue it either way ad infinitum, but staying pure ended up being disastrous for Apple.

"Well, there would have never been a Windows operating system to begin with if Apple would have opened their OS to other OEMs"

I don't see how that's possible. The original Mac OS was written in 68000 assembler and wasn't designed to be ported to the IBM PC and clones. It's doubtful that Apple could have created an a 68000 clone industry, even if had wanted to, since businesses had already standardized on MS-DOS, Lotus 1-2-3, etc. by then.