Apple's "WebKit" is now a Registered Trademark in the US

On March 7, 2013, the US Patent & Trademark Office approved and published Apple's latest registered trademark for "WebKit" under registration number 4,296,939. Apple open-sourced WebKit in 2005 and is now the foundation for browsers found in Amazon's Kindle, RIM's new Z10, Google's Android and will be adopted by Samsung for their future Tizen OS. It was also reported last month that the next generation of Mobile Browser from Opera will be based on WebKit. 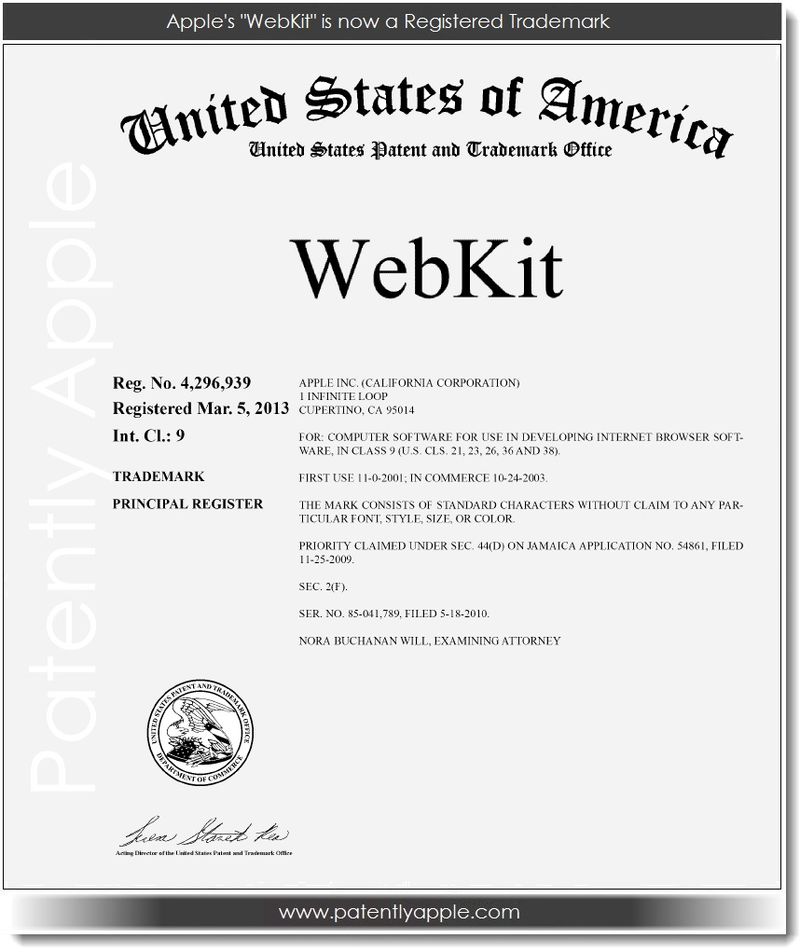 Apple's WebKit was filed under International Class 009 which in this case simply covered "computer software for use in developing internet browser software."

In Steve Jobs' recently published "Thoughts on Flash" he stated that "WebKit has been widely adopted. Google uses it for Android's browser, Palm uses it, Nokia uses it, and RIM (Blackberry) has announced they will use it too. Almost every smartphone web browser, other than Microsoft's, uses WebKit. By making its WebKit technology open, Apple has set the standard for mobile web browsers."

Well, times change and even Microsoft's MVP Bill Reiss has openly wondering if Microsoft should adopt WebKit for future mobile devices. Though some think for enterprise security reasons alone Microsoft should never adopt WebKit. Who knows how that will play out down the road, but for now, Apple's strategy to have WebKit as the foundation for all modern mobile browsers has won the day and today, WebKit is officially Apple's registered trademark in the United States.