On March 28, 2013, the US Patent & Trademark Office published a patent application from Apple that reveals another waterproofing idea for small portable devices. Apple has shown to have been working on a waterproof, or at the very least, a water resistant solution for over a year now. We covered this subject in a well-documented report last March. Today a new patent application illustrates that they're also working on a different angle to creating water resistant devices using a multi-layered ceramic enclosure mixed with Alumina to provide the enclosure with a good RF transmission capability. Our report also touches on another interesting process that Apple is working on called a "Shot Peening, Shot Blasting Process" for creating part flatness.

In recent years, portable electronic devices, such as laptop computers, tablet computers, PDAs, media players, and cellular phones, have become compact and lightweight yet powerful. As manufacturers have been able to fabricate various operational components of these devices in smaller sizes, the devices themselves have become smaller. In most cases, despite having a more compact size, such components have increased power as well as operating speed. Thus, smaller devices may have much more functionality and power than larger devices of the past.

One design challenge is to provide an aesthetically pleasing enclosure that is functional for the intended purpose of the device. With more devices being capable of wireless communications, a radio transparent enclosure would be beneficial, as it would allow components, such as antennas, to be positioned inside the enclosure. Users also desire an enclosure that can withstand mishaps. Thus, a water-resistant and scratch-resistant enclosure would also be desirable.

Therefore, it would be beneficial to provide improved enclosures for portable computing devices, particularly enclosures that are functional and aesthetically pleasing yet durable.

Apple's patent FIG. 1 below is an exploded perspective diagram of an electronic device 50 that may be sized for one-handed operation and placement into small areas, such as a pocket. By way of example, the electronic device may correspond to a computer, media device, telecommunication device like an iPhone, an iPod touch or even apply to a future iWatch.

Apple's patent figure one is just a concept and not an actual design patent. It's presented as a generic device and nothing more. Apple notes that it will be understood that the device can have rounded or chamfered edges.

The housing 52 generally includes a main integral body 54. By integral, it is meant that the main body is a single complete unit. By being integrally formed, the main body is structurally stiffer than conventional housings, which typically include two parts that are fastened together. Furthermore, unlike conventional housings that have a seam between the two parts, the main body has a substantially seamless appearance. Theoretically the new iPhone design that was revealed this morning could be such a seamless design that could take advantage of such materials, at least as an alternative design for a more economical iPhone.

Moreover, the seamless housing prevents contamination and is more water resistant than conventional housings. The main body 54 can also include one or more windows 56, which provide access to the electrical components, particularly the user interface elements, when they are assembled inside the cavity 58 of the main body 54 as noted below in FIG. 1. 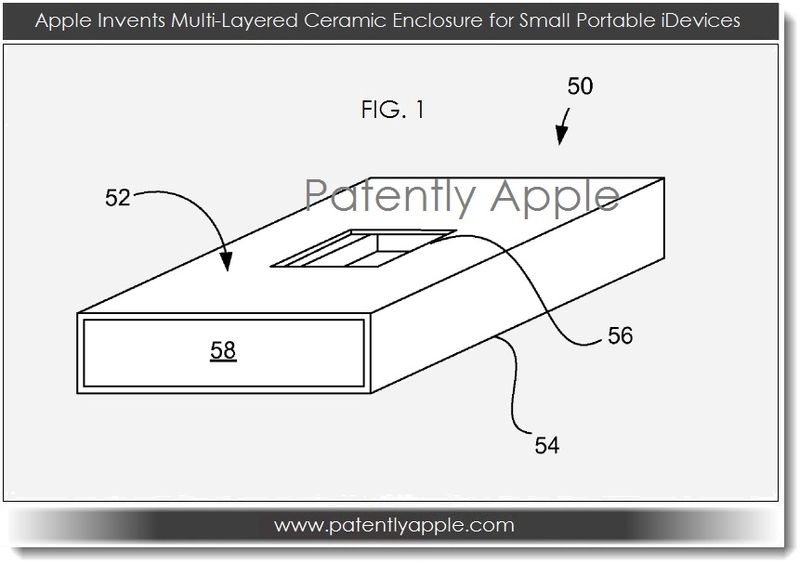 If it's desired that the housing be RF transparent, then the main body can be formed of layers of ceramic material (such as alumina) having the desired RF transparency.

In order to optimize the properties of housing, it may be advantageous to provide layers of different ceramic materials. For example, although alumina has good RF transmission properties, the strength of, for example, zirconia can be better suited for applications such as portable media players where the housing would be exposed to substantial mechanical, chemical, and other environmental impacts. In this case, the outer layers of the housing can be formed of, for example, zirconia, having a residual compressive stress profile that sandwiches an internal layer of alumina providing a good RF transmission capability.

Apple credits Douglas Weber as the sole inventor of this patent application which was originally filed under serial number 246625 in Q3 2011.

Another interesting manufacturing process patent published today by the US Patent Office is tilted "Shot Peening, Shot Blasting Process for Part Flatness" This particular Apple invention generally relates to a system for providing a shot peening test kit used in a mass production environment in the production of thin walled aluminum components. The thin walled aluminum components are used to fabricate aesthetically pleasing consumer electronic products such as a laptop computer, tablet computer, and the like. For more on this, see patent application 20130074305.