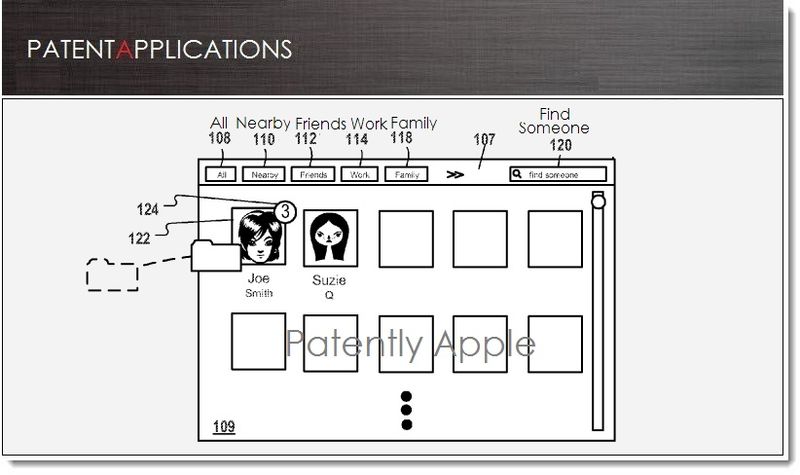 On March 28, 2013, the US Patent & Trademark Office published a patent application from Apple that reveals new graphical user interfaces related to facilitating interactions with contacts. The newly proposed "contacts" GUI is designed for Macs, iDevices and a possible future TV. With the new contacts user interface, a user will be able to transfer a file to a contact by simply dragging and dropping a file icon onto a visual representation for a recipient contact. The communication mode for the transfer can be determined manually by the user or automatically based on the contact's current online status.

Modern electronic devices (e.g., smart phones, tablets, laptop computers) enable users to interact using a variety of communication technologies. In addition to telephony and email, users can communicate through text messaging, online social networks and microblogging services. Users can store information for friends, family members, co-workers, customers and clients (collectively, "contacts") on their device using a virtual address book. The address book can store contact information for a contact, including telephone numbers, email addresses, Web addresses, home addresses and the like. Users can exchange information and content, including electronic documents and books, digital images, videos, music and the like. This content can be stored on a network where it can be accessed by others. For example, content can be posted by user on their social network account where their designated "friends" can view and comment on the content.

Although these modern electronic devices have enriched the lives of users around the world, many of these devices fail to provide a simple and intuitive user experience when exchanging communications and content with contacts.

A user can transfer a file to a contact by dragging and dropping a file icon onto a visual representation for a recipient contact. The communication mode for the transfer can be determined manually by the user or automatically based on the contact's current online status.

Selection of a visual representation of a contact exposes a window with a timeline display providing descriptors for communications with the contact. The window can include user interface elements that can be selected by the user to communicate with the contact.

In some implementations, a method includes: generating a graphical user interface (GUI) for display on a device; determining a set of contacts; displaying the GUI on the device, the GUI including thumbnails representing the set of contacts; receiving first user input including dragging and dropping a file icon representing a file onto a thumbnail; responsive to the first user input, selecting a preferred communication mode for transferring the file to the contact; and transferring the file to the contact using the preferred communication mode.

Apple's patent FIG. 1 shown below illustrates an exemplary GUI for displaying visual representations of a set of contacts and facilitating a file exchange with a contact. The device can be a desktop computer, laptop computer, smart phone, electronic tablet, television screen or any other device capable of displaying a GUI. The display can be a touch sensitive surface responsive to multi-touch input and gestures.

The GUI can include toolbar 107 and contacts area 109. The Toolbar can include one or more user interface elements (e.g., virtual buttons) to allow the user to select (filter) for display a subset of contacts from the set of contacts. Contact information can be stored in a local virtual "address book" or remotely on a network device. 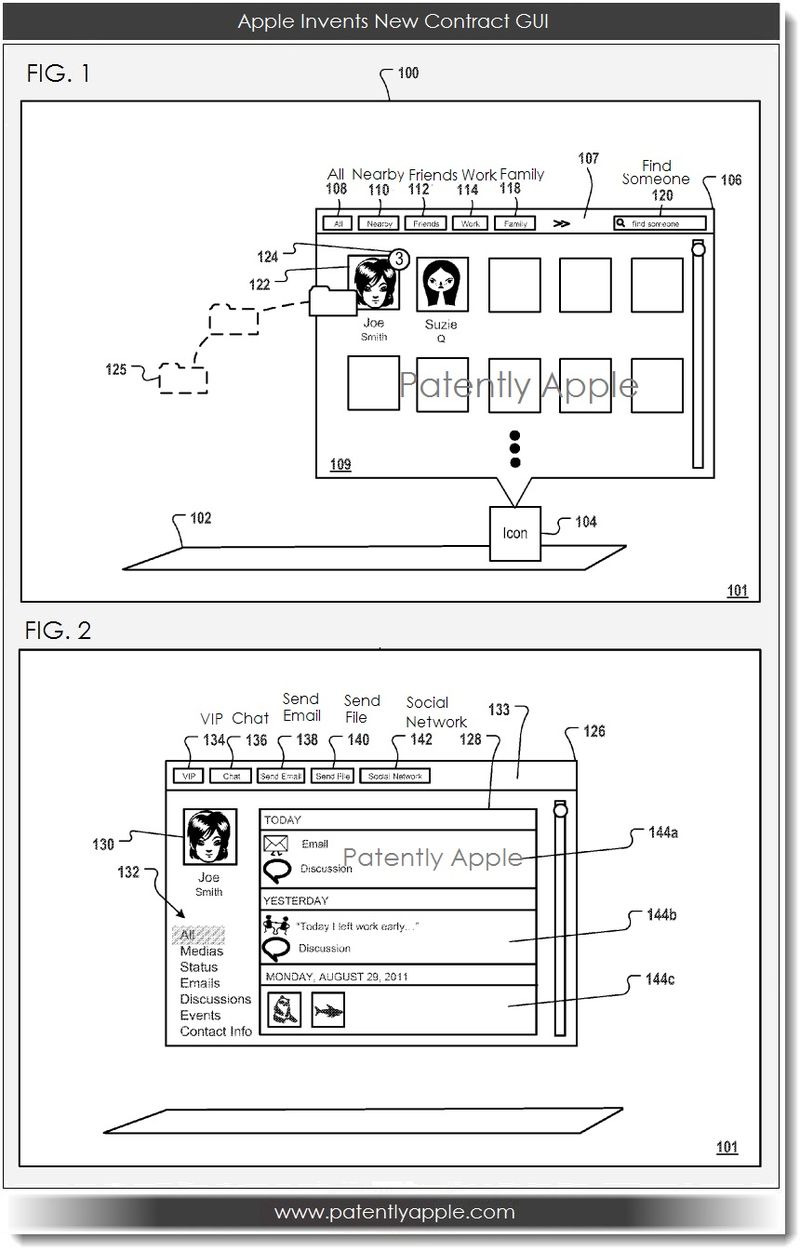 In the example shown, section 144a displays icons for email and chat discussions, section 144b displays icons for social network postings and chat discussions and section 144c displays media. The media can be, for example, digital photos downloaded from a photo gallery posted on the contact's social network account. Other media can include videos, audio files (e.g., voice messages, songs, ring tones) and electronic documents and books.

In some implementations, toolbar 133 can include user interface elements VIP 134, Chat 136, Send Email 138, Send File 140 and Social Network 142. VIP 134 allows the user to force a specific contact to stay at the top of contacts area by marking or flagging the contact as "VIP." The VIP can be used for contacts that do not communicate often with the user (e.g., through the Internet) but are still important to the user. Thus, a contact that is marked as "VIP" will have its default ranking based on previous interactions overridden.