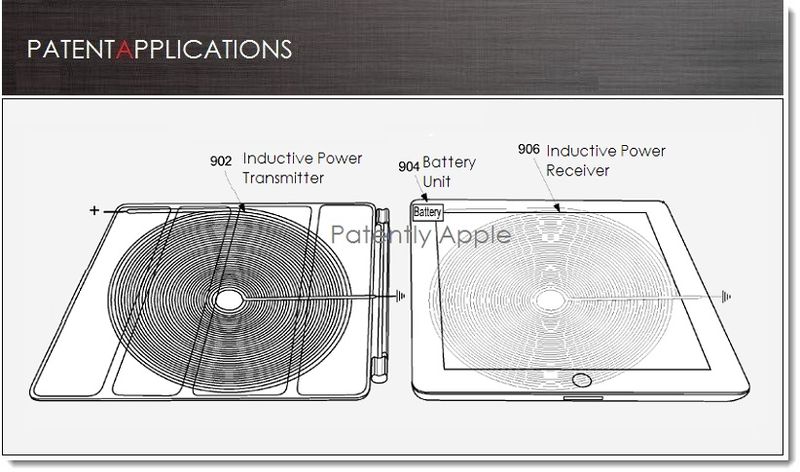 On March 14, 2013, the US Patent & Trademark Office published a patent application from Apple that reveals the next step in the evolution of the iPad Smart Cover with built-in inductive charging. Simply put, this is a great idea to keep the iPad charged while on the go.

Apple's invention relates to a system, method, and apparatus for wirelessly providing power to the iPad through a future version of their Smart Cover.

Apple states that the body portion includes an inductive power transmitter arranged to wirelessly pass power to a corresponding inductive power receiver unit disposed within the iPad by inductively coupling, at least a first magnetic element, and at least a second magnetic element used to secure the body portion to the display in a closed configuration. In the closed configuration the first magnetic element is detected by a sensor disposed within the iPad, the detection altering a current operating state of the tablet device.

In another embodiment, a method for wirelessly powering an iPad is disclosed. The method can be performed by carrying out at least the following operations: determining if a protective cover is in a closed configuration with respect to the tablet device, enabling a wireless power receiver circuit in the tablet device when it is determined that the protective cover is in the closed configuration with respect to iPad and wirelessly receiving power from a wireless power transmitter associated with the protective cover.

The protective cover can include an adaptive inductive power supply system capable of varying the amount of power supplied by the protective cover by way of inductive coupling based on the needs of the iPad. The adaptive inductive power supply system can supply power to the iPad at a proper magnitude at a beginning of an operation, as well as to continually monitor the power supply circuit and make adjustments in real-time as needed providing the adaptive power the ability to change in accordance with changes in the power requirements of the tablet device. For example, the adaptive power supply circuit can adjust characteristics, such as frequency, duty cycle and power magnitude, to accommodate various operating states (current power consumption, battery level, and so forth) of the iPad.

The apparatus includes at least a means for determining if the Smart Cover is in a closed configuration with respect to the iPad and means for wirelessly receiving power from a wireless power transmitter associated with the protective cover. This could be in-tune with Apple's master plan for wireless charging. Meaning that this future iPad Smart Cover inductive charging system could be recharged simply by placing the iPad and its cover near an iMac which would recharge the Smart Cover without any wiring required.

In patent FIG. 5 shown below we see the Smart Cover in a kickstand state. In this arrangement, inductive power transmitter 502 can be used to wirelessly transfer power to the iPad by way of inductive power receiver 504. 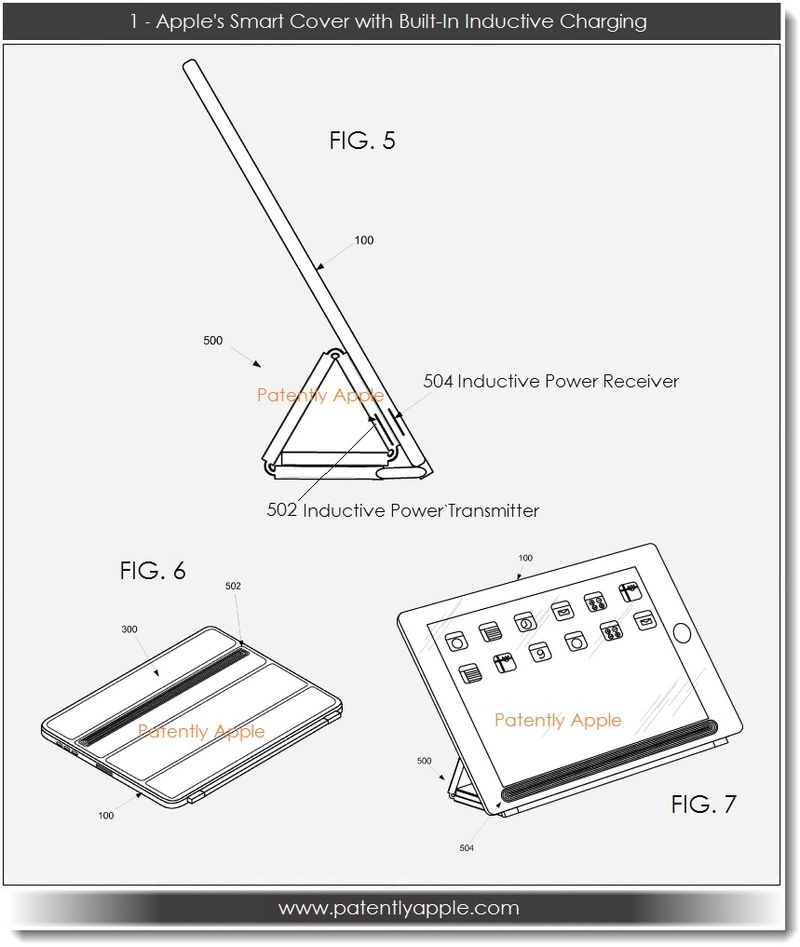 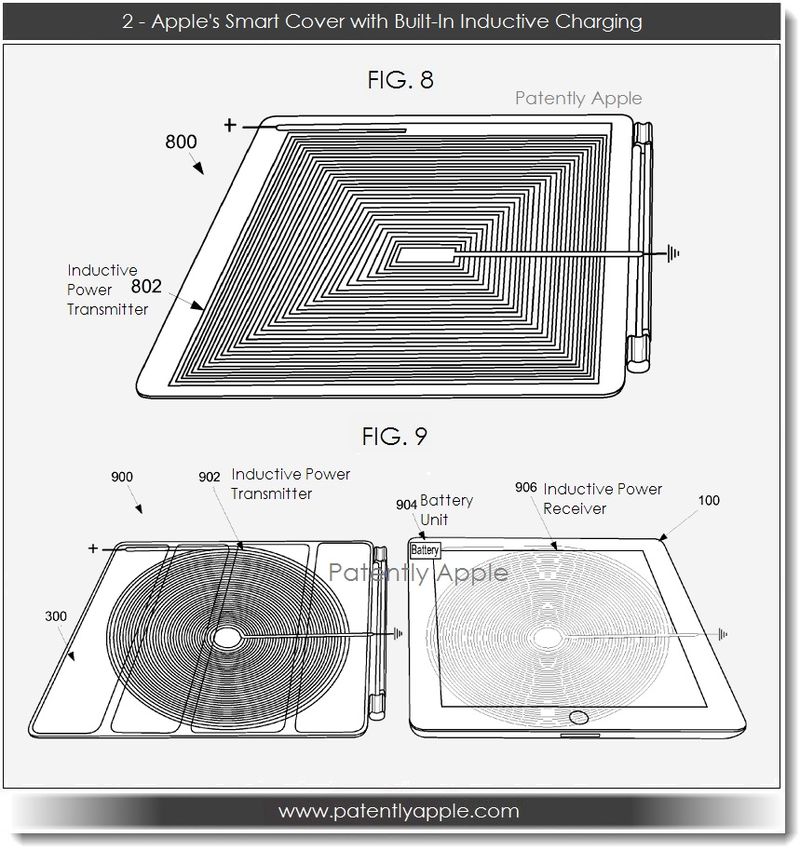 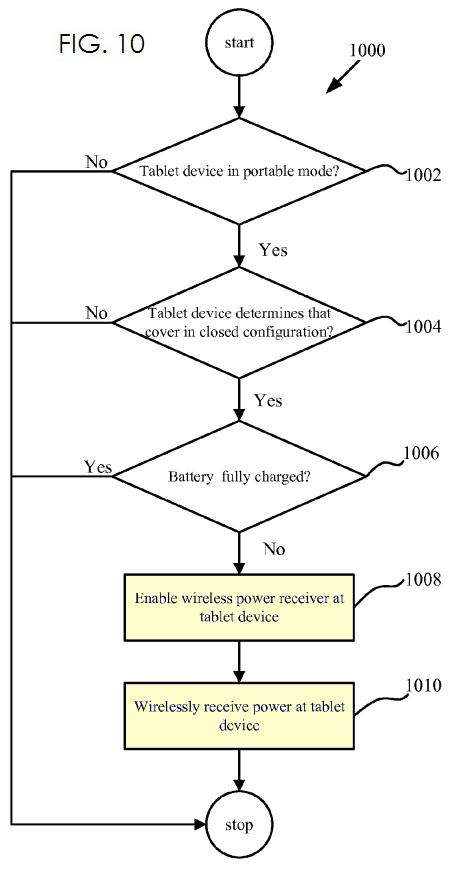 Apple credits Justin Wodrich and Stephen McClure as the inventors of this patent application which was originally filed under serial number 230574 in Q3 2011.

And somehow little old Patently Apple is harming the patent system. I think someone making such an outrageous claim should have their head examined.

I was told by a fan last night that he looked up this guys past reports supporting Samsung. So the overboard attack is understood for what it is.

We don't always get patents right 100% but we damn well try to be honest, and that's the bottom line. In this report Andy we point to another Apple patent on inductive charging that will allow a Smart Cover like the one above easily charge without having to plug it in. Apple is also working on solar powered Smart Covers for on the go convenience. So in the bigger picture Andy what we covered is correct.

If you only knew the amount of law firms covering us and spreading the word about our site, you'd be amazed. So if 99.9% of lawyers and legal professors enjoy our site, I'm okay with that. The odd Samsung slanted lawyer really doesn't mean much in the bigger picture Andy.

You are being blasted by patentology.