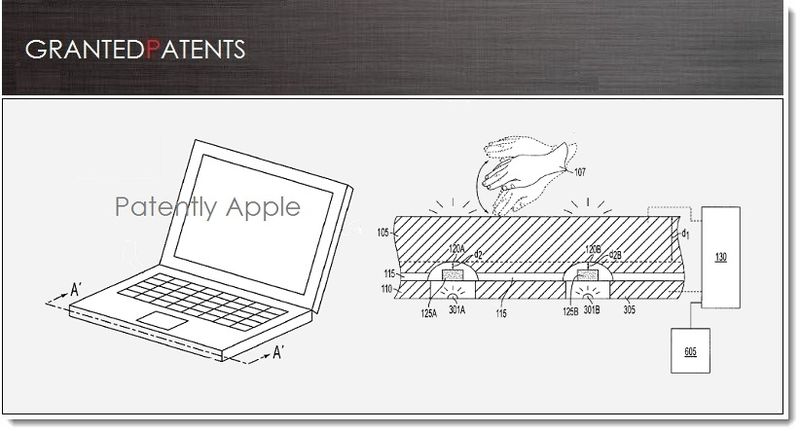 The US Patent and Trademark Office officially published a series of 39 newly granted patents for Apple Inc. today. In this particular report we cover an exception to the rule. We present a granted patent that has yet to surface but is a wild one to acknowledge. Welcome to a view of a futuristic MacBook where the keyboard could appear or disappear with a single wave of the user's hand. Now that's cool.


Metal Devices that Could Provide Next Generation Touch Controls

While conventional housings for electronic devices may be manufactured using different types of plastics, an increasing number of housings are being implemented where the housing is manufactured, in whole or in part, using metal. 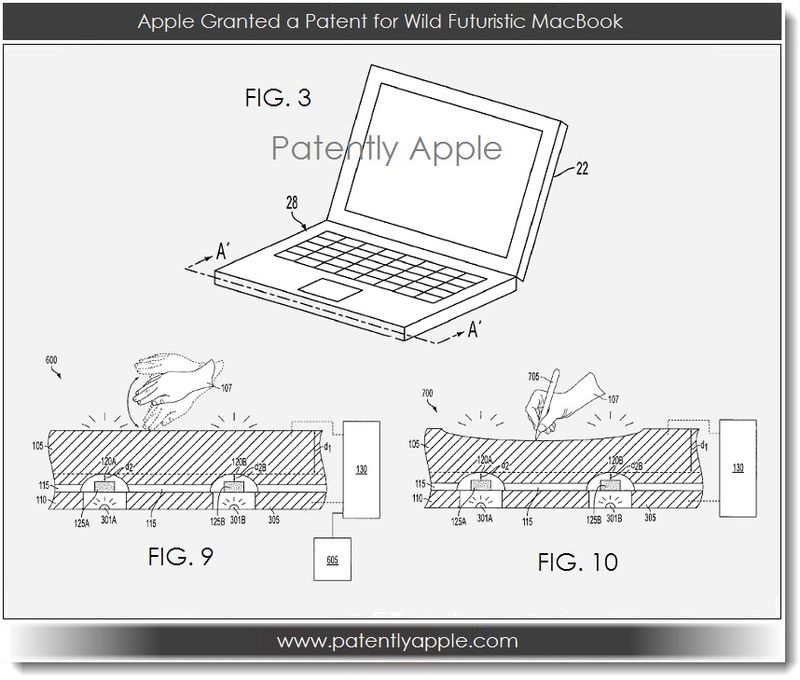 Alternatively, a user may be able to interact with the housing input mechanism without actually making physical contact with the electronic device. For example, in the context of FIG. 9, if the housing input mechanism 100 is used in place of the traditional keyboard of the notebook computer, then pressure waves that may arise from a user waving his hand over the keyboard may provide the user interaction, e.g., waking up the notebook computer 22 from a sleep state.

But this is where it really gets wild. Apple's patent filing describes a futuristic non-physical MacBook keyboard that only appears when the the user waves their hand over the keyboard area: "This ability may allow the housing input mechanism 600 to be implemented as a hidden keyboard, where the illumination devices are illuminated when the user waves his hand over the housing to cause the keys to appear."

Stylus & Squeeze Inputs for Future MacBook or other iDevices

Apple states that other embodiments, such as the housing input mechanism shown in patent FIG. 10 above, may include the user making contact with the device's housing using a stylus.

In other embodiments, such as the PDA, the personal media player and/or the mobile telephone, the housing input mechanism may be incorporated into the portions of the devices that typically make contact with a user's hand. For example, if an iPhone is in the user's pocket and begins to ring, a user may simply squeeze or tap the iPhone to silence it.

Apple's patent FIG. 8C shown below illustrates another very interesting alternative embodiment in the form of a spiral arrangement which Apple describes as having invisible holes ("visually imperceptible to the user"). In this embodiment, as the user moves his hand across the housing in various directions, the housing above each of the terminals may be depressed in a certain successive pattern, and the microprocessor may process the detected patterns to determine a direction of the overall user's movement across the housing.

The spiral design is interesting considering that Apple has a number of spiral related software patents (one, two) for iTunes that could be triggered by the sensors found on future iDevices and MacBook as described above. 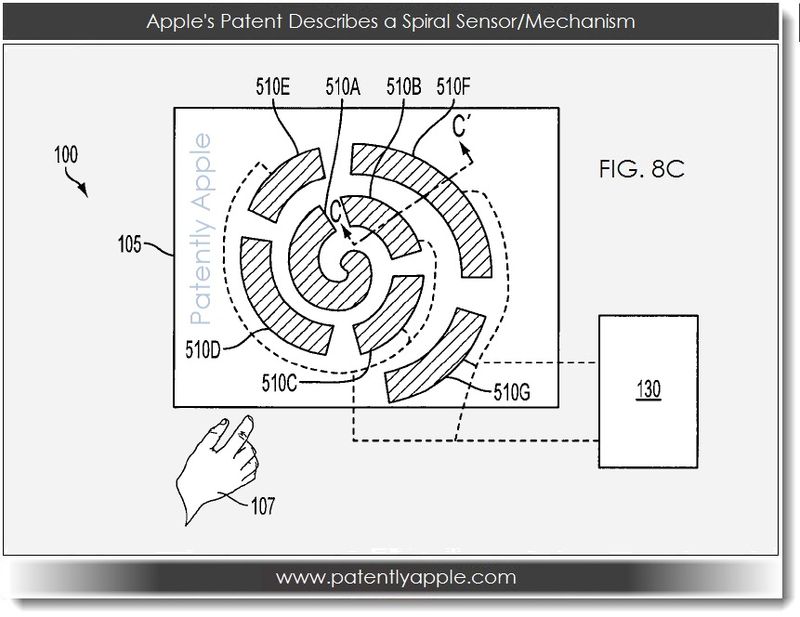 Apple credits Aleksandar Pance, Nicolas King, Duncan Kerr and Brett Bilbrey as the inventors of this granted patent (8,390,481) which was originally filed in 2009.

I'll talk to Apple's engineers about that, SGS. How dare they (Ha!).

'Moves HIS hand'? What century is this? Why not just say 'moves their hand' and avoid annoying 50% of the population?