A social network is a social structure made of individuals (or organizations) which are connected by one or more specific types of interdependency, such as friendship, financial exchange, dislike, sexual relationships, beliefs, knowledge or prestige. Social networking services manage data related to social networks among online users who may be friends and/or share interests or activities. A social network service typically provides a representation of each user (often a profile); the relationships between that user and other users (i.e., the user's social connections); and a variety of additional services (e.g., photo sharing services, online chat, etc). Many social networking services are Web based and allow users to interact through the services over the internet.

Through the social networking service, users may share ideas, activities, events, and interests within their network of friends and acquaintances. Social networking services often include category places (e.g., former classmates), techniques to connect with friends (e.g., typically with self-description pages) and a recommendation system linking users based on trust. Some of the more popular social networking sites include Facebook, Twitter, MySpace, and LinkedIn.

A Data Management System for a Social Networking Service 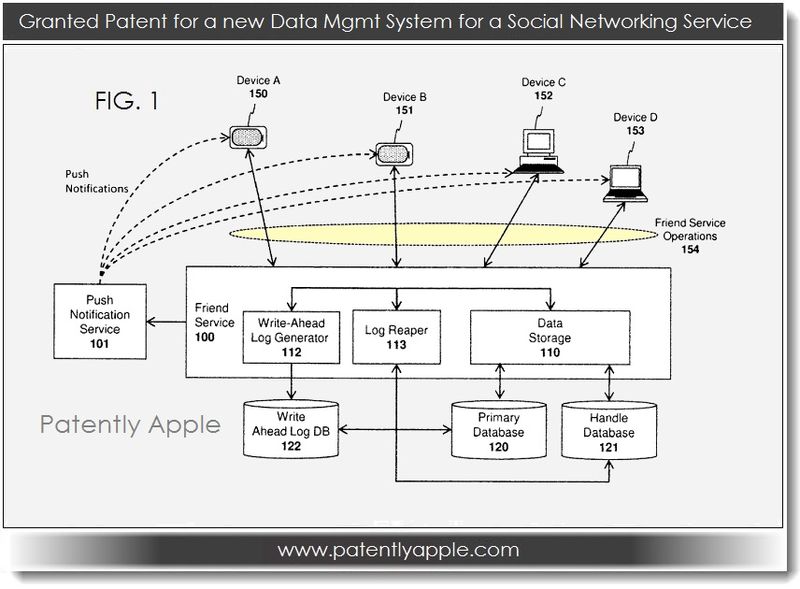 Defining and Reacting to Spammers and Stalkers

There are two aspects to Apple's data management system that are unique. The first is how the system defines and reacts to social network spammers. Both of these services are found in the "Friend Service Operations" layer of the data management system as we highlighted in yellow above in granted patent FIG. 1.

Apple states that a spammer count (spammerCount) may be maintained in the record for each friend service identification code comprising a unique destination signaling identifier ("DSID"). The DSID is to assist in identifying spammers. Each DSID may be permitted to send a limited number of friend requests per specified time period (e.g., hour, day, week, month, year, etc). Each time a user sends a friend request, the spammer count value is updated by 1. When the spammer count threshold is reached, the friend service 100 may prevent the user from sending additional friend requests for the remainder of the time period (and/or may take other steps such as warning the user).

In another unique data management feature, the system is set to understand what a stalker is and more importantly, how to respond to this potential threat accordingly. Apple states that in one embodiment, each time a friend request is received by a first user from a second user, and the request is rejected by the first user, the second user's stalker count is increased by 1.

While Apple's system will log stalker information, it's unknown if this data could later be used in court to gain a restraining order. That would certainly be of assistance to those being seriously stalked.