The filing is so new that the court's public notice simply states that the proceedings for this case are not available at this time. 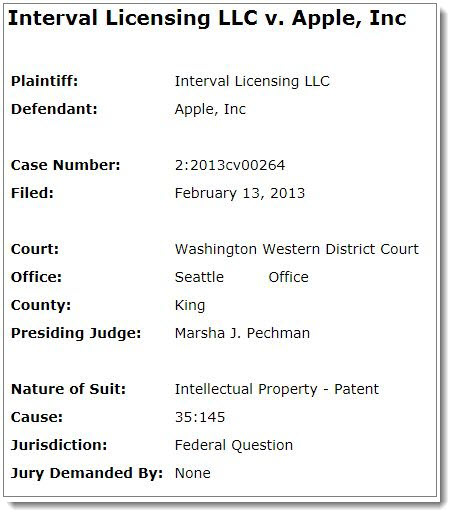 The patents that were used in the past against Apple and others include the following:

US Patent 6,263,507 titled Browser for Use in Navigating a Body of Information, With Particular Application to Browsing Information Represented by Audiovisual Data; US Patent 6,034,652 titled Attention Manager for Occupying the Peripheral Attention of a Person in the Vicinity of a Display Device; And yet others include US Patent 6,788,314 and 6,757,682.

If the proceedings are made public later today we'll update our report accordingly.

Having considered the parties' joint contingent stipulation of dismissal, the Court ORDERS the Defendants's counterclaims with respect to the '652 Patent and the '314 Patents are DISMISSED without prejudice and Defendants and each of them individually shall have the right to assert any and all defenses and counterclaims for infringement of the '652 Patent or '314 Patent in this or any future case."