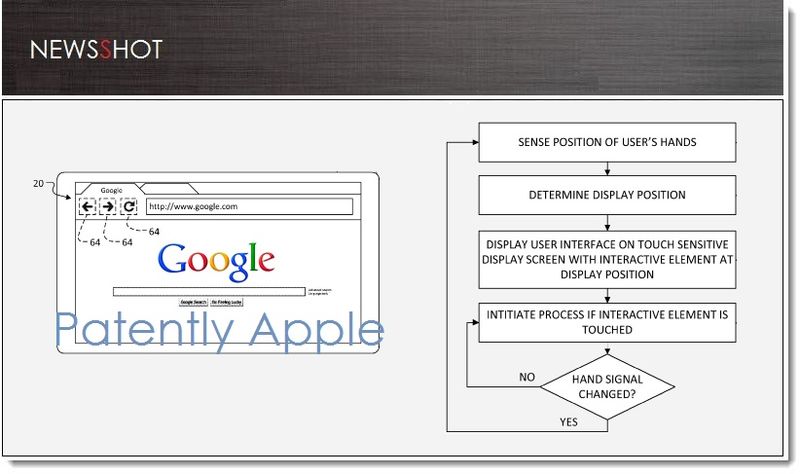 Earlier this month Patently Apple slammed Google for their blatant attempt to copy Apple's Retina display before it was made official late this week. Today, our Patent Bolt site is reporting on a new patent application from Google that once again copies ideas from a couple of Apple patents filed back in 2011 and 2012. The Google patent is about a touch sensitive tablet housing that could manipulate interface elements by the user's own touch.

Yet perhaps one of the true surprises that emerged from this new patent filing was the revelation that future Google based tablets won't be running on Android as suspected but rather on Chrome OS.

While I'm not a fan of Google's by any stretch of the imagination, savvy if not ruthless competition is good for Apple. If Apple's competition is pushing ideas that Apple is simply happy to sit on, then that's their choosing. But I have to admit that it's getting a little tiresome to continually see Apple's original ideas being picked off by these copycats.

While I fully understand Apple's passion for perfection, the "rest of us" would be content with Apple rolling out more cool features at a faster pace that could be perfected over time, like Siri. I'm not saying that Apple should put out crap – like they did with Maps, I'm just saying that Apple should be putting more of their ideas out into the marketplace at a little quicker pace so as to cut the copycats' fuel-line to fame.

A case in point: Samsung's upcoming Galaxy Note 8 will introduce a new Wallet Service to rival Apple’s Passbook. Yet Apple has been working on an electronic wallet far longer than Samsung.

At the end of the day, who will be first to market with next generation tablets with smart housing controls? While only time will tell, I think you know who I'm cheering for.

If you would have checked the link, the article points to a "Samsung" wallet product, not Google's.

Google Wallet was out long before Apple's passbook?

I agree that having several competitors at the top will help breed better products. I also have to jump into the Maps discussion here and say that the Maps rolled out by apple was disappointing and not as useful compared to to the google map.

Thanks for that Gavin. The "perception" was that it was crap and in some foreign countries it did in fact screw up badly; face it. However, where I live I love Maps, so I get your response.

the maps were not crap!