Google has a new Concept Video out about their upcoming "Chromebook Pixel." It's a slab of marketing out to copy Apple's Retina Display which is the most advanced display on the planet delivering crisp images, text and most importantly color accuracy that's yet to be matched. Google knows all too well that Apple has the Retina advantage and they're out to try and fuzzy that all up with slick marketing tactics. In the end it's a broken mirror. Our report covers two videos and a transcript of Google's video. Check it out.

Apple's promotional webpage on the new MacBook Pro with Retina Display clearly states that there are over 4 million pixels in their 13 inch model and over 5 million pixels in their 15 inch model. Apple first introduced the Retina Display with their third generation iPad on March 16 2012. In Apple's video they make it clear that they didn't just jam more pixels into the display for the sake of adding pixels. Yet that's just what the copycatters are doing so that they could claim the same amount of pixels than Apple's Retina Display.

Samsung claims to have more pixels than the Retina display and yet Apple makes it clear in their video that just jamming more pixels into the same space will end up with pixels with crossed signals leaving distorted colors and fuzzy images. If you've ever compared an iPhone 5 to a Galaxy in respect to display quality, you could certainly tell that Apple has delivered a true breakthrough like their video claims. The Android camp wants to play the same game as Intel did on the PC side by blurting out specs that sound great in ads but have no real meaning to them whatsoever. It's just marketing nonsense. Samsung's Galaxy S3 display is simply no match for Apple's Retina.

Now Google, the Industry's Copycat King, is at it again. They've just released a new concept video about an upcoming ChromeBook and they're promoting what? You guessed it, a Retina Styled Display with 4 million pixels. Sounds great in a video but have they reengineered it like Apple's Retina or are they just jamming in more pixels? Their video doesn't clarify this and so it's likely just more propaganda Google Style.

The following is Patently Apple's transcript of the new Concept video by Google:

"This is a Pixel. The smallest bit of a picture made of tiny red, green and blue lights. Now by itself, a pixel isn't much, but together pixels create entire worlds. You could say like an atom, a pixel is a building block. And the more pixels we add, the more wonderful the world. And from four million pixels, we created something new: The ChromeBook Pixel.

A new kind of computer designed entirely by Google. And we asked ourselves, could this pixel create a new world of possibilities? A world so rich you want to reach out and touch it. A world where you see things like you've never seen them before. A world that's faster; where all your things are always wherever you are. And your computer actually gets better over time. And all this made us wonder, what's next. And though we don't know exactly what the future holds, we hope that you'll help to shape it, with this laptop, designed by Google, down to the last pixel." 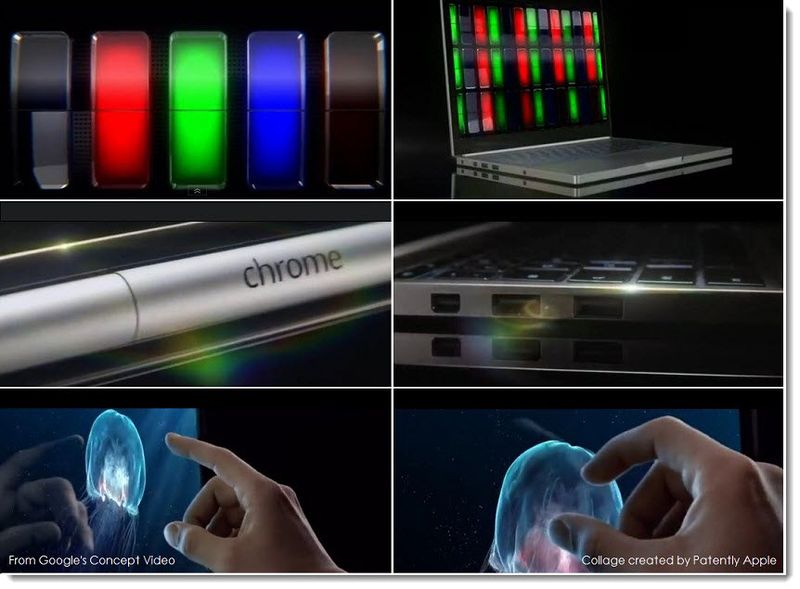 Intel's next generation Ultrabook Convertible makes a lot of sense because the touch display could separate from the keyboard and provide users with a true tablet that's ergonomically right for a touch display.

Google's concept video is promoting their notebook as one with a touch display that will provide users with Gorilla Arm over time. So while it looks nifty in a video, it's just a gimmick to look cool.

Yet in the end, the newly redesigned ChromeBook with its claimed "Chromebook Pixel" is really just another copycat attempt at another Apple technology. Google's Chromebook Pixel is trying to copy Apple's Retina Display, right down to the very last pixel.

And one more thing: We posted a report back in December titled "Cries of Apple's Patents Being Found Invalid a Nice Pipe Dream." The report laughed at the press that were all too happy to claim that Apple's Pinch to Zoom patent was invalidated. Our report showed that over 80% of the time, a so-called invalidated patent can survive with a simple tweak of a claim during the appeals phase. So when Apple's Pinch to Zoom patent is validated once again, the Pinch and Zoom feature found in Google's video may just have to be pulled. Yet while Apple is going through the regular USPTO process to have their patent reinstated, Google is out to mimic Apple's Pinch to Zoom while the copycatter could legally get away with it. These guys have no shame (ha!).

Related Material: AU Optronics Testing iPad Mini 2 with New Level Retina Display - Retina is only going to get better in the coming year.

Don't bother replying SC, your quota for comments is now over for the day.

I'm an idiot. I don't know when to shut-up and stop wasting everyone's time. I hate all things Apple and don't care about context. I will complain until you say Samsung is king.

On this point you have it backwards, SC. Apple filed for a glasses patent in 2008. Who's first now? Who's copying Apple's idea?

As to your added comment to me about a 7" tablet. Man, can't you stay focused on the topic at hand. Are we talking about smaller tablets? Ha!

So Apples interest in development of a product similar to Google's Project Glass doesn't count then?

The sarcasm of Androiders is endless. Nice to see that our report has bent your nose out of joint.

It's a shame that NO ONE has had a new idea since Steve Jobs.

I'm saying that Goolge is a great follower, but a follower of Apple ideas they are, and this is one of them that I'm pointing out.

So what you're saying is nobody but Apple can enhance it's products by using high density pixel displays.

No, it's definitely not "Advancing." That's what Google-Heads think following means which is a perversion of what they actually do: copy. Since it was Apple who first introduced "Retina," the first display to quadruple pixel density,right,then it's Apple who "advanced" the technology. Lee Iacocca once said, "Lead, follow or get out of the way." Apple leads and Google follows, for the most part. Project Glass may turn the tables in 2014 in favor of Google. But in this case, today, in context with this report, Google is the follower, the copycat, plain and simple: get over it.

Its not copying, its technology advancing. Apple don't own the sole rights to use high density pixel displays.

Really Frank, is that why we covered 21 patents of Google extensively?

You're just a one-sided Androider who can't take it when someone calls it as it really is.

Well of course a pro apple site would poo poo all over any thing from google. Not exactly unbiased reporting huh?

How do you "fuzzy" already fuzzy marketing?

Is that a Thunderbolt port on the side?