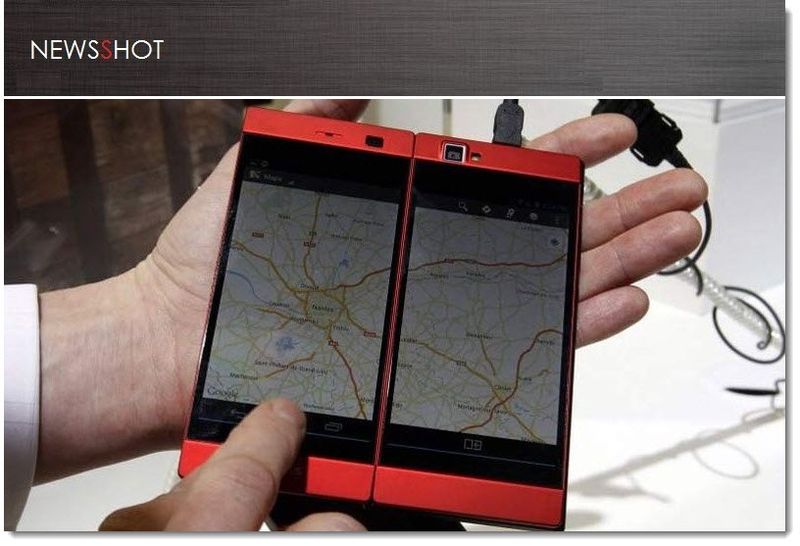 It looks like we're in store for a wild holiday season this year as developments out of Barcelona's Mobile World Congress show us that the mobile industry is going all out to best each other in smartphone, phablet and tablet designs and services. Our cover graphic illustrates one of the most exciting smartphone designs to show up at the exhibition. It's a dual display smartphone that may entice some to choose this design over a mini tablet. With this design you get dual displays and each could carry its own content for true multitaskers or present users with one image like a large map using both displays cooperatively. Yet, there was a bull in the China Shop at this year's exhibition and that was of course Samsung. We'll update you on their latest important developments that could have an impact later this year and for years to come.

Dual Display Smartphone Could be a Next Way Design

The first dual display smartphone was presented at the NEC booth that got a lot of traffic and buzz. As illustrated below, Samsung is another smartphone player with designs in this category of smart device and others are working on this as well. On the other hand, there's no sign of Apple even thinking of such an entry at this point in time. It's this kind of design diversification in the smartphone sector over time that could hurt future iPhone sales. 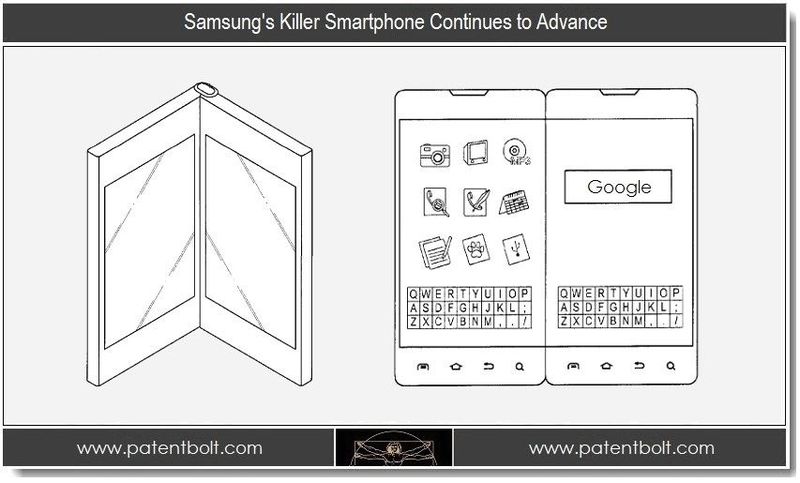 Samsung's New OS will Ship This Year & Supported by Others

As we reported on earlier this month, Samsung did in fact discuss their new operating system with partners behind closed doors. The new Samsung led OS was another buzz at Barcelona's Mobile World Congress and Samsung gained new partners in their venture that could be coming to market as soon as this July.

According to sources, Company executives at Samsung Electronics have confirmed that KT will collaborate closely with them on the Tizen smartphone operating system. In a dinner meeting with reporters, KT Chairman Lee Suk-chae confirmed Monday that he met with the electronics giant's heir-apparent Lee Jay-yong and talked about releasing a Tizen handset this year.

The would-be competitor for Google's Android and Apple's iOS is a joint project between multiple information technology firms led by Samsung Electronics, which is aggressively planning to create its own ecosystem this year backed by the support of global carriers.

Last week we posted a report titled "Could this be the Year that Apple Introduces the iWallet?" We noted that North American Carrier blocks were ramping up the eWallet initiatives for a big push by year's end. In Barcelona, Samsung was noted as signing a major deal with Visa. A new eWallet component is bound to play a role in Samsung's new operating system in addtion to further supporting their Android smartphone lineup.

All in all, there appears to be a number of big shifts that are in the wind for new smartphone, phablet and tablet designs later this year to really shake things up but the introduction of Samsung's new OS has to be longer term threat if it succeeds. But that debate is still a few years away.

In the shorter term, Samsung is continuing to grab the spotlight in the press and it's only going to get louder until they launch their new Galaxy SIV smartphone on March 14 in a separate event. They keep copying Apple's marketing model and they're not shy about following that trend that Steve Jobs engineered many years ago.

If anything, Samsung has put some real fire into the smartphone and tablet race between themselves and Apple, and as consumers, that's a good thing. Competition will also fire Apple up and this fall promises to be a wild ride as the two smartphone giants battle it out for holiday sales.

For those of you who haven't seen Samsung's latest 8 inch tablet, here's a video from UK's Telegraph.

You could also check out Time's Techland overview of the 10 notable phones and tablets that emerged from the Mobile World Congress tradeshow in Barcelona.

Once android is able to support dual displays, maybe someone will come up with a "hinge" sort like that on a tablets with detachable keyboards, that will allow someone to hook 2 tablets together