Did Someone Really Receive a Trademark for the Name Steve Jobs in Turkey?

Apple legal may have some scrambling to do in Turkey on Monday morning, if a report out of that country has a shred of truth to it. According to a Turkish blogger, a businessman by the name of Kamil Kürekçi has been granted the trademark "Steve Jobs" by the Turkish Trademark Office. The trademark is to be used in context to a textile brand, likely for a line of clothing. This Report was Updated on Feb. 06, 2013

A rough translation of the owner's statement concerning the granted trademark: "Opening overseas with this name will be an advantage for us considering that we will be mainly exporting. We think that Steve Jobs is a worldwide known brand that will never be forgotten. It is also obvious that it will facilitate our work on overseas advertisements of our products."

Below is a Turkish Patent Institute form noting that a filing for the STEVE JOBS trademark was made on October 24, 2011. 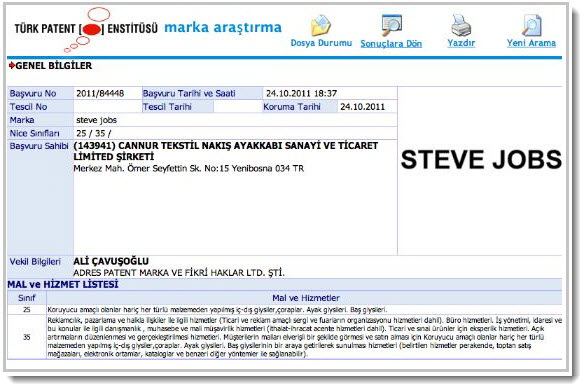 We were provided with a link to the Turkish Patent Institute's trademark search page in an email that sent us to a simple page with a single link on it. That second link led us to a patent office search form where we fed in the name STEVE JOBS. The search yielded the result noted below. (Updated Feb 06: the second link became disconnected shortly after our report)

The legal dates shown on this form clearly are October and November 2011 or close to 15 months ago. While we're not experts on how trademarks are handled in Turkey, we did note that the form does contain a column that is clearly labelled "Protection Date." Whether "Protection" in Turkey has the equivalence of "Granted" in the US is unknown, but it appears to be a reasonable inference.

Yet at the end of the day, I don't know whether to laugh at this story or simply see this as a slip by the Turkish Trademark Office for ever letting it past the laugh test. In other words, did someone turn left on stupid? But if there's some truth to this whatsoever, then I'm sure that Apple Legal will squash this like the bug that it is in no time flat.

Report Update Feb. 6, 2013: I received another email from an individual in Turkey who advises us that the application was indeed accepted on Oct 19, 2012 but is still subject to opposition within a 3 to 4 month period. This would mean that Apple legal has to file their opposition immediately, if they haven't already done so already.