Elia Data of Texas has filed a patent infringement lawsuit against Apple. The patent infringement lawsuit alleges that Apple infringed upon a 2001 patent titled "Method and system for secured transport and storage of data on a network." Elia claims that Apple's Remote Desktop, OS X Server, iCloud, iTunes and App Store services infringe upon various claims of their patent. It would appear on the surface that Elias Data is little more than a patent troll.

The inventor of the original granted patent as noted below is Sandy Kronenberg. Elias Data isn't listed on the granted patent even though they claim to be the owner by assignment. If anything, it illustrates that Elias Data purchased the patent for the sole purpose of suing Apple and likely others in the future for something they will never actually use in the market save for lawsuits. By definition that makes Elias a patent troll. 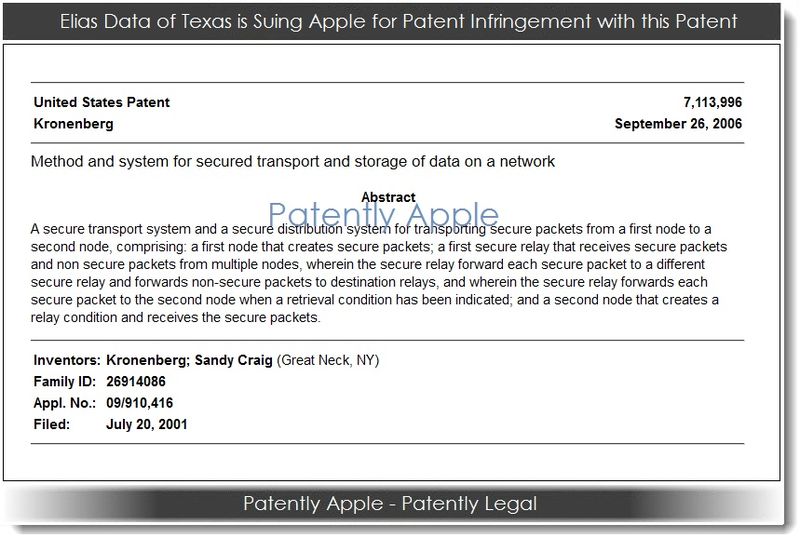 The summary above suggests it would cover OpenSSH's tunnelling support, which existed prior to the patent filing date of July 20, 2001. See the message on the OpenSSH Dev mailing list from Jan Vroonhof on Nov 28, 1999 which contains the sentence, "Open ssh tunnel from machine H to a machine A on the other network."

As the sentence is not about the additional of tunnelling, the capability probably dates back to Tatu Ylönen's original SSH.