Apple Wins a Shocker with 2008 Touch Based Solar Panel Patent

The US Patent and Trademark Office officially published a series of 40 newly granted patents for Apple Inc. today. In this particular report we cover a real little shocker. In this granted patent Apple reveals that they've been working on display panel technology that integrates both touch and solar cells on a single panel since a little after launching their revolutionary iPhone. Apple's follow-up patent to this current one was published in 2010.

Apple was granted a patent today for their invention relating to integrated touch sensor and solar panel configurations that may be used on portable devices, particularly handheld portable devices such as a media player or phone.

According to Apple, the integrated touch sensor array and solar cell stack-ups may include electrodes that are used both for collecting solar energy and for sensing on a touch sensor array. By integrating both the touch sensors and the solar cell layers into the same stack-up, surface area on the portable device may be conserved.

The integrated touch sensor and solar panel may include electrodes that provide the same coverage as a typical solar panel electrode, but provides far more quadrants or pixels that may be used as touch sensors. The electrode terminals may be connected in parallel in order to draw power from the cell during a solar power cycle. The terminals may then be connected as separate quadrants during a touch sensor cycle. A multiplexer (MUX) may be used to selectively switch between power conversion circuitry and touch sensing circuitry during power and touch sensing cycles respectively. 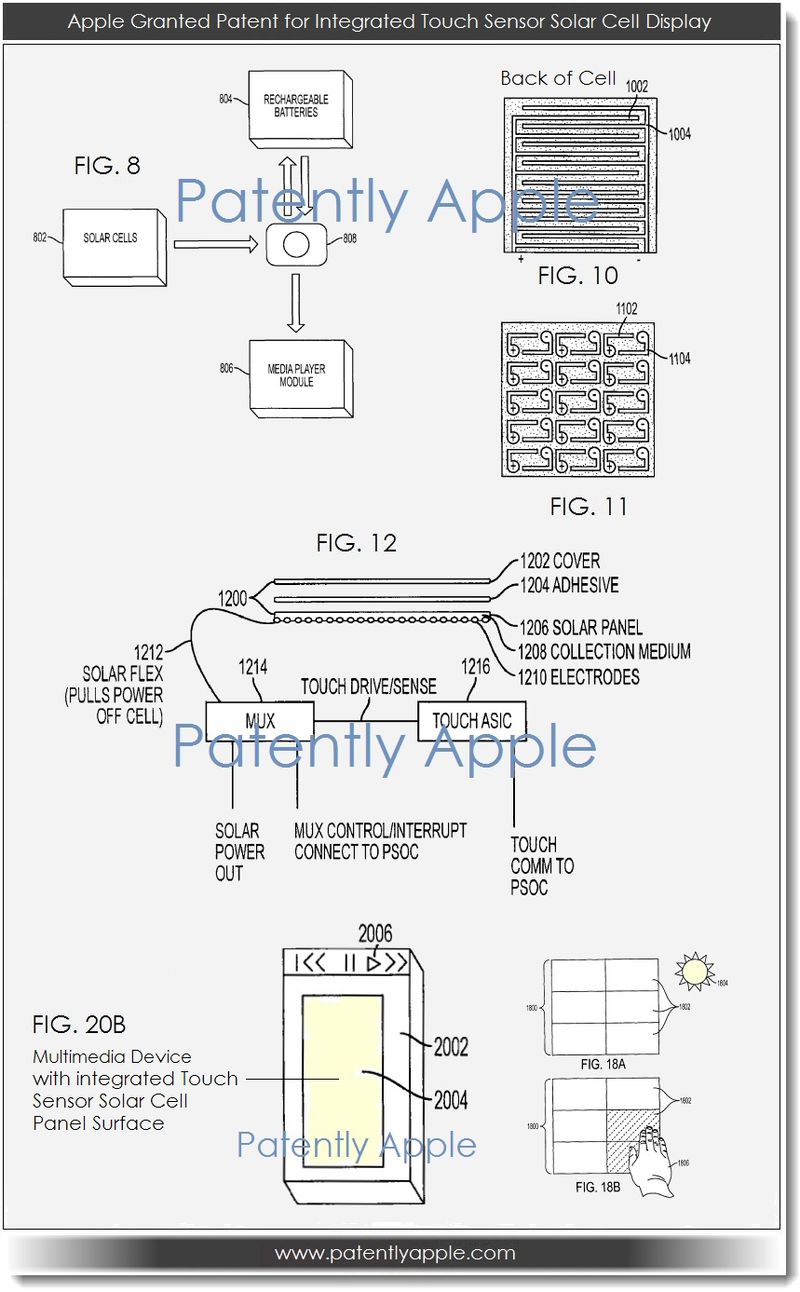 About Apple's Patent Figures: FIG. 8 depicts a block diagram illustrating various functional modules. It includes one or more solar cells, one or more rechargeable batteries and a main operational module of the device; FIG. 10 illustrates a typical electrode configuration for a solar panel; FIG. 11 illustrates an electrode pattern including electrodes that may be used for an integrated solar panel and touch array; FIG. 12 illustrates an integrated solar panel and touch sensor stack-up; FIGS. 18a/b illustrate optical sensing and power production using a solar panel. In FIG. 18b an incoming object such as a user finger, blocks one or more electrodes of the solar panel. An algorithm may then be used to switch the device to a touch sensing mode that increases the number of touch sensing cycles in a given period. FIG. 20B is an exemplary handheld media player including an integrated touch sensor solar cell panel surface that substantially fills the front surface of the housing of media player.

Apple credits Michael Rosenblatt, Benjamin Lyon, John Filson, Steve Hotelling, Gordon Cameron and Cameron Frazier as the inventors of this granted patent which was originally filed in Q3 2008 under application number 12/242,723 and published today by the US Patent and Trademark Office. To review today's granted patent claims and details, see US Number.

For more on Apple's work on solar energy see our Green Technology Archives. Just last week we posted another green technology-based report titled "The Race is on for an iPad with Integrated Solar Panels & More." If Apple could get this type of innovation out to market in a timely manner it would certainly provide them with another wow-technology feature.

Yes, Apple has biometric patents covering fingerprints. However, although Apple lists a single reference to "Finger Identification" in their "other references" list on this patent, the invention is focused on Solar Cells integrated into the touch display. Can Apple combine both technologies? Theoretically, perhaps. But it's not covered in today's granted patent, Ken. Nice thought though.

This could have other more exciting implications. Couldn't it? It wasn't long ago that apple purchased authentic. If the optical sensing cycle can also be used to scan your finger tips, then we have a recipe for a sci-fi caliber,breakthrough technology. Some might call it revolutionary.

So am I understanding this right? Can this optical sensing cycle scan finger tips? Maybe?