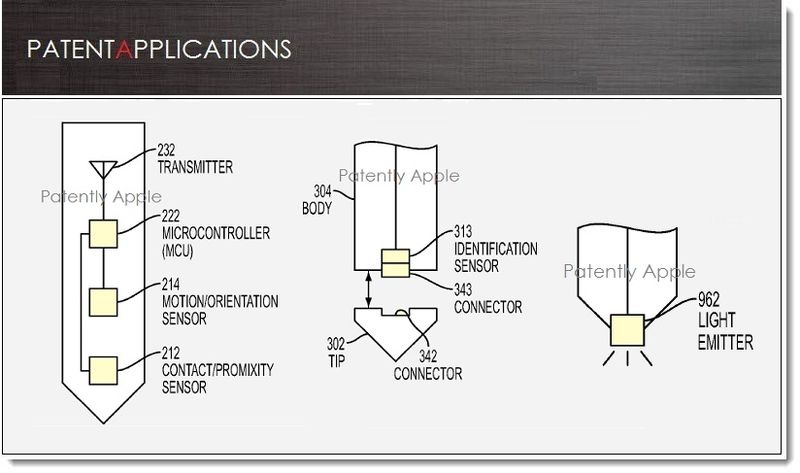 Every once in a while we check out various IP databases around the world to see if we could find any Apple activity. Well, Bingo, we found three all new smart pen patents from Apple that are chock full of great ideas. In between Apple's US patent filings published in May and December, Apple's engineers were filing new patents in Europe that were published just two months ago. These have not been published in the US yet and so they're new to us. And boy does Apple go deeply into the rabbit hole or what. Apple has a ton of new ideas on how to advance the smart pen. Yet the one twist that I thought was intriguing is that Apple appears to be seriously thinking of turning smart pen tips into an accessory business. Do you want your pen to be a brush? No problem, here is a new pen tip for that: Ka-Ching. Do you want your pen to double as a bar code reader? No Problem, here is a tip for that: Ka-Ching. And there are a lot of "Ka-Chingy" ideas in these three new patents to go around. Check it out. 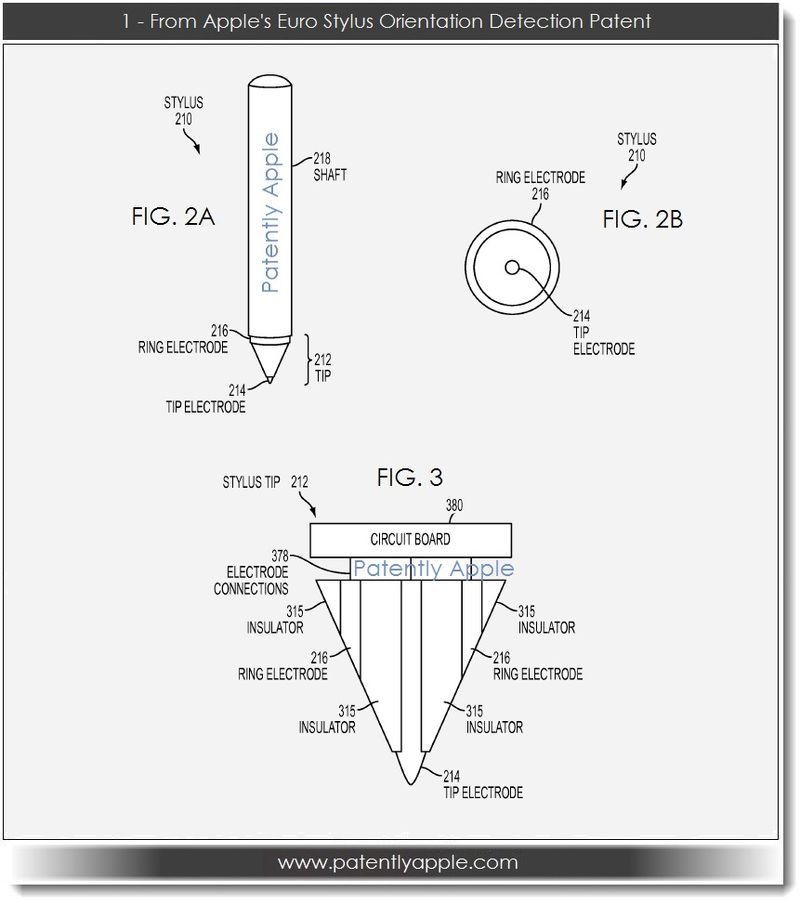 Apple's patent FIGs 4A and 4B illustrate a perpendicular orientation and a tilted orientation respectively of an exemplary stylus; 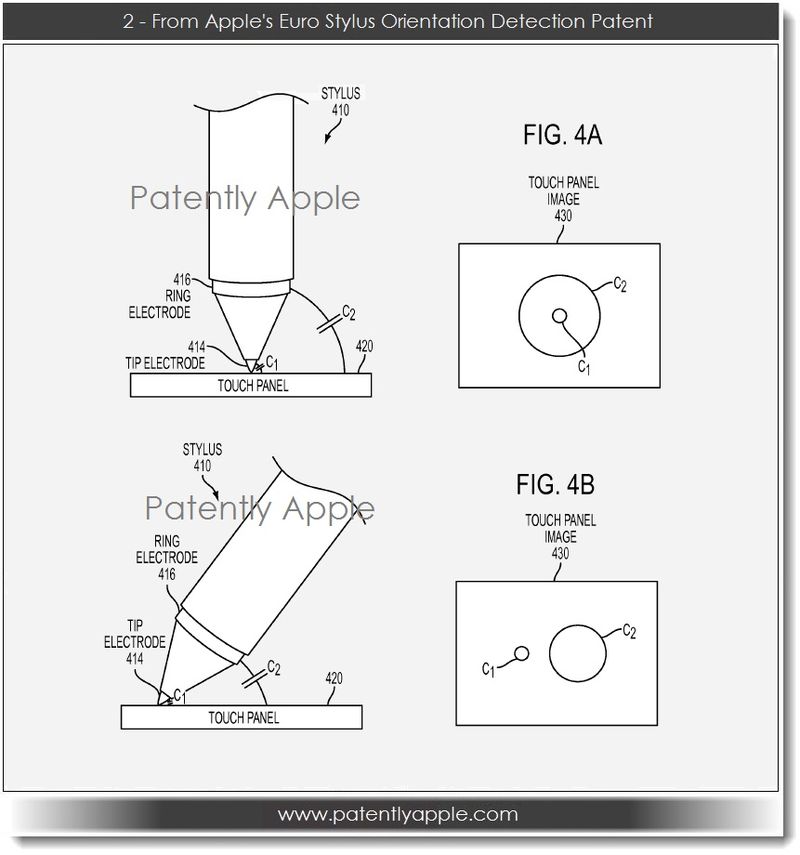 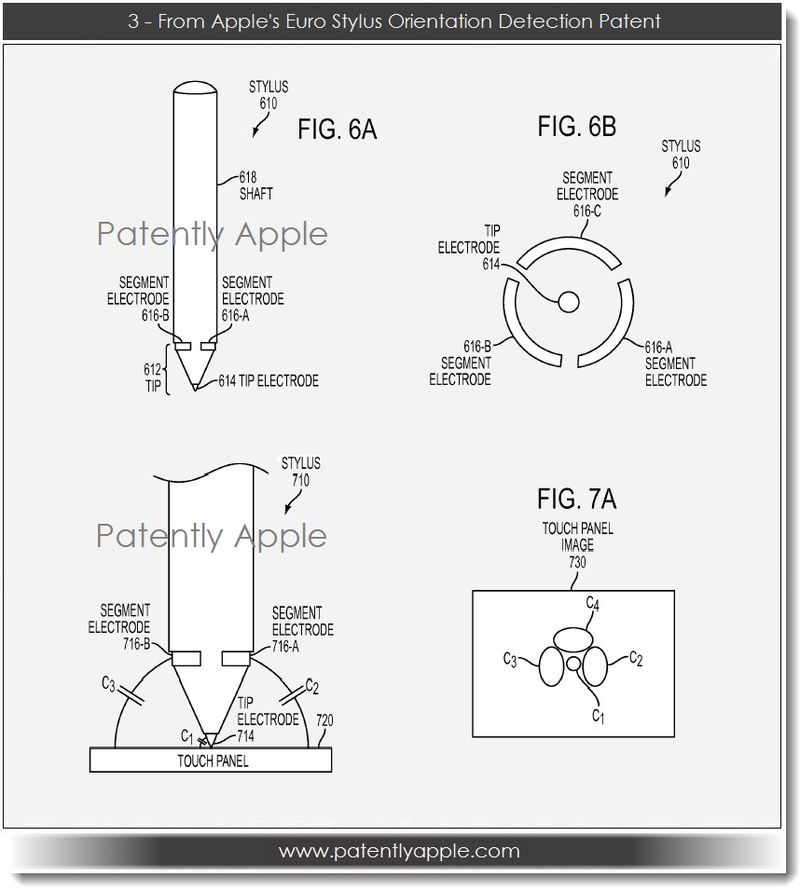 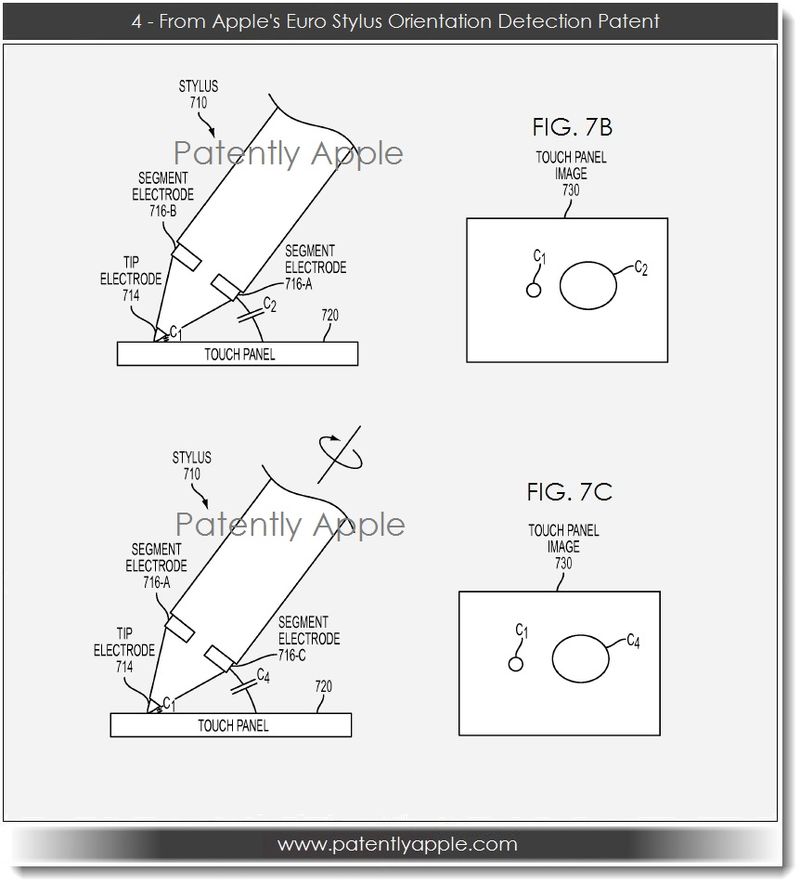 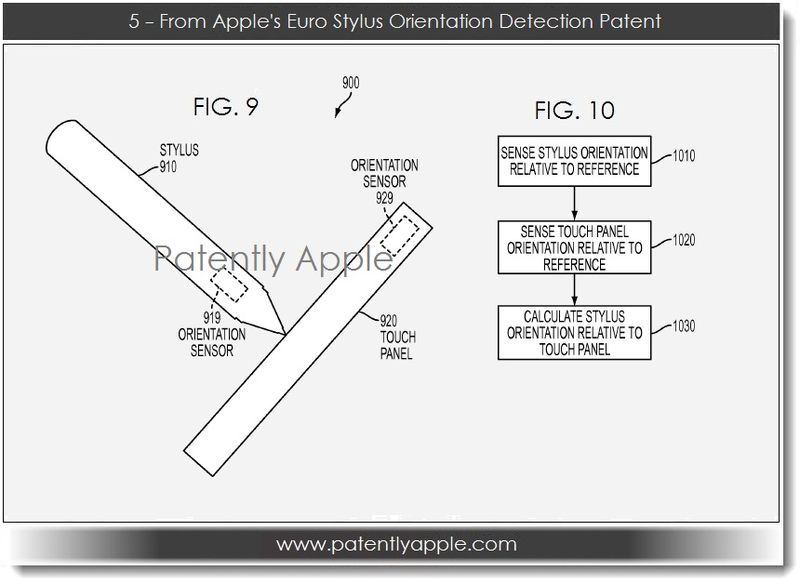 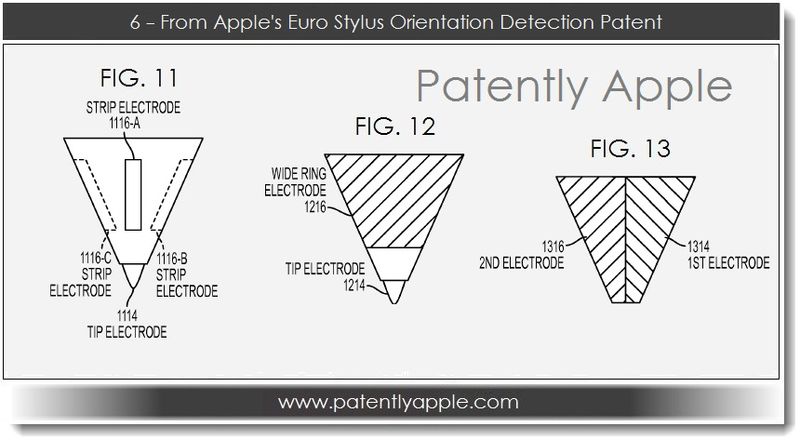 Apple's European patent filing came to light two months ago. Apple credits Li-Quan Tan, a hardware engineer specializing in embedded systems design; Jonah Harley, a senior silicon sensing engineer; Debanjan Mukherjee, an architect; and others as the inventors of this latest stylus invention. Below are brief overviews of two additional smart pen patents developed by yet other engineers and teams. All three patents were published in Europe two months ago. Yet considering that they've yet to come to the US, they're all the more interesting as Apple appears to be splitting their smart pen patents between the US and Europe to make it harder to figure out the bigger picture and not ruin the element of surprise. For all we know, they have smart pen patents tucked away in China or Australia.

Apple's second Euro filing focuses on advancing the stylus in other ways. One focus is that the smart pen (stylus) will be able to open your favorite app that you use the pen with on a daily basis at work, school or home.

Apple's patent FIG. 4 illustrates and exemplary stylus including an accelerometer that will be able to turn the pen on or off automatically depending on the movement of the pen or stylus.

In Patent FIG. 6 we see a stylus that including a pressure sensor. Additionally, we see that in this design the stylus has a moveable tip (#630) 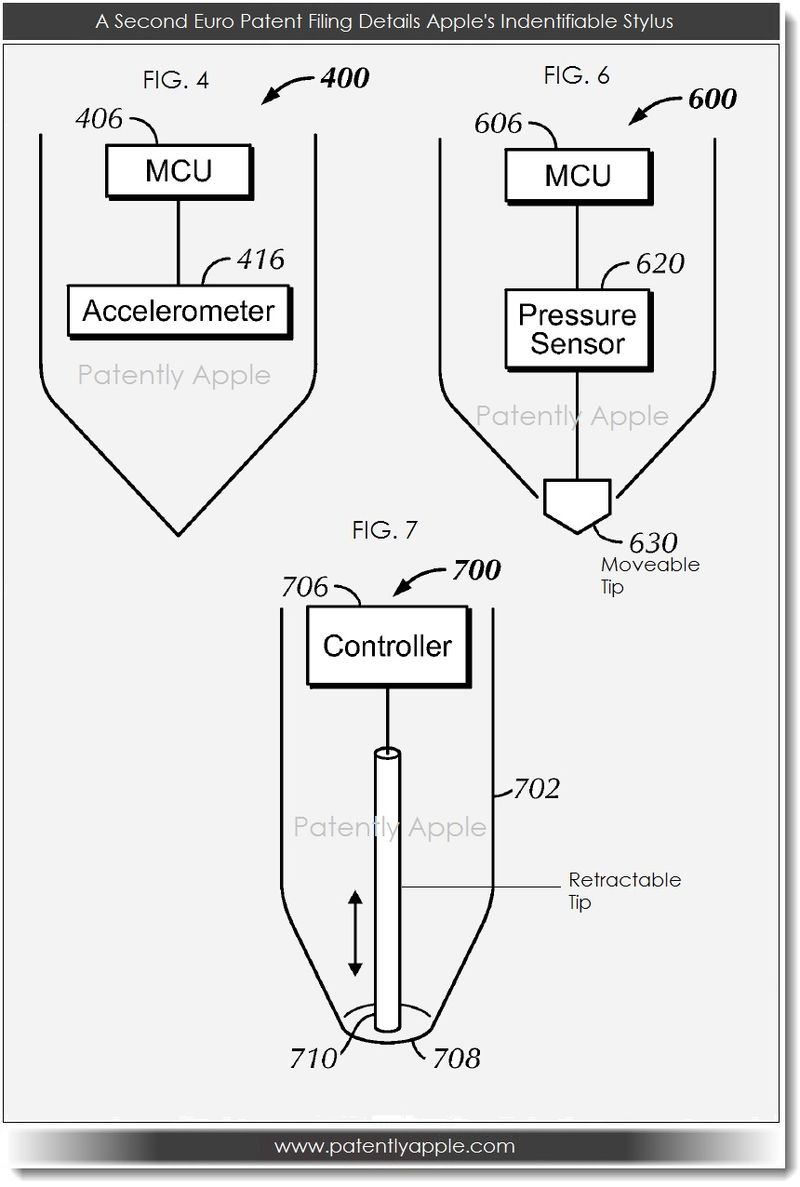 Apple's patent FIG. 7 noted above illustrates a stylus including a retractable tip that is similar to a click pen. Other figures showed that the pen could be outfitted with a button.

The key point in this patent is that the stylus can be set to automatically open a word processor app when the pen is picked up by the user. I suppose if you follow the logic here, the user will likely be able to have a choice of which app to open automatically with the stylus. Alternatives will likely be a notepad, a graphics app, a doctor's chart, a sales form or any other professional app that is the user's main application for the pen.

In this third and final Euro filing we find that Apple's extensive patent figures shown below to be self-explanatory. We're able to view some of what Apple's engineers are designing in bite-form. Of course not all of these will come to fruition but there's a lot of logic to what Apple is doing here. One interesting idea in particular is that the pen could switch, via a touch sensitive ring around the pen, into a camera/scanner device that could read bar codes. 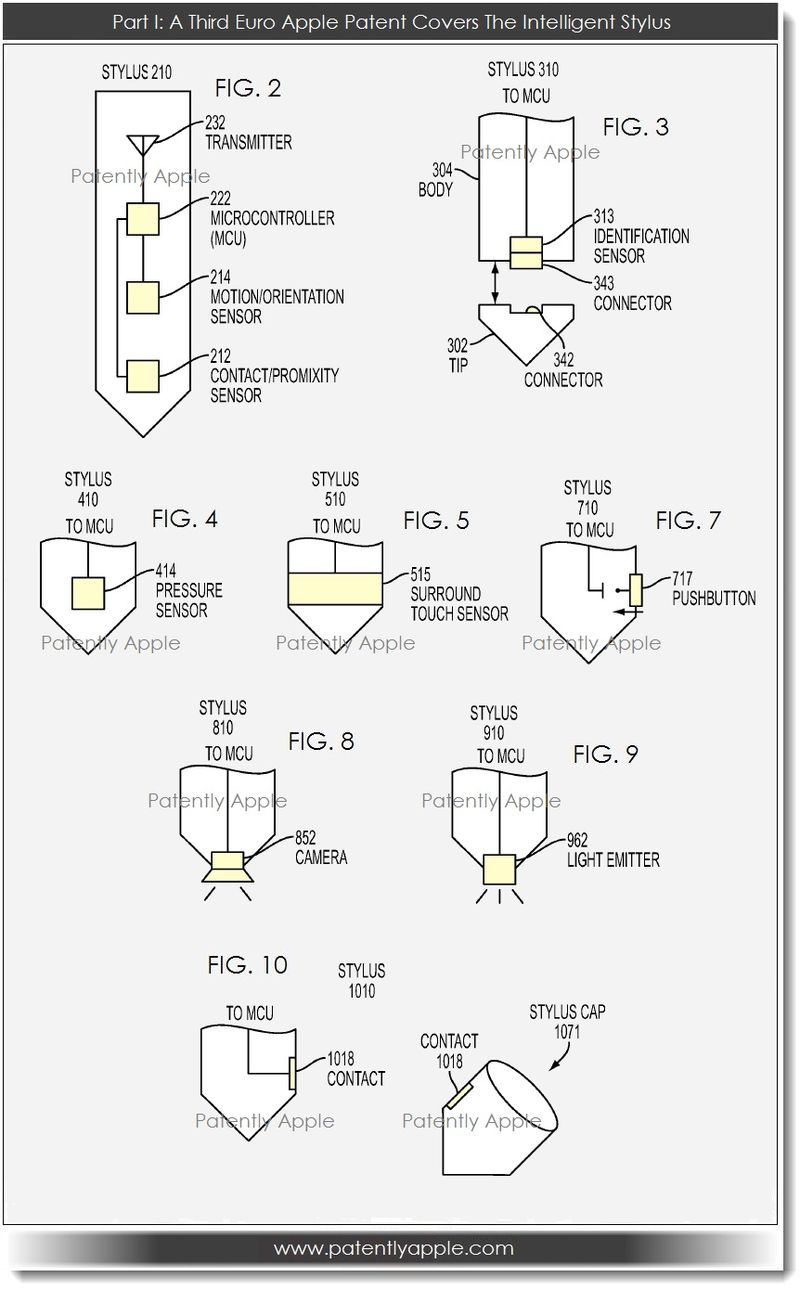 Another original idea is that the pen will allow the user to record a specific gesture motion that will act as the smart pen's password. This way only you could operate the pen with your device. It will help to deter theft and safeguard your work from your kids who would purposely scribble on your new presentation slides with vigor if given the chance (kids will be kids). 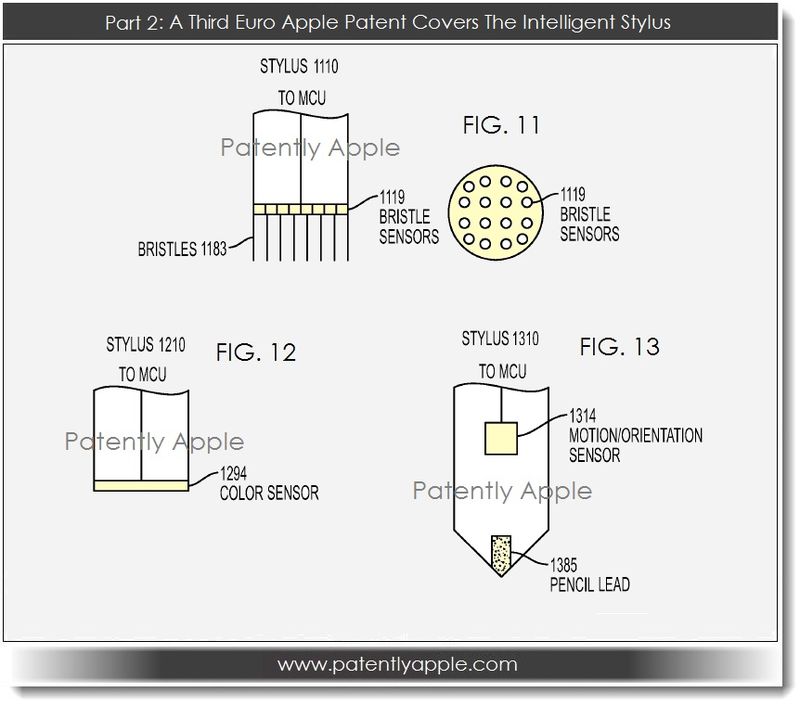 What's interesting here is that you're given the distinct impression by what Apple is describing, that the sheer number of varying tips will turn into a little accessory gold mine for Apple. For instance, if you want your smart pen to be a paint brush, you can simply replace the tip. Want your smart pen to be a barcode reader? No problem, Ka-ching, another accessory charge and it's yours.

In patent FIG. 11 we see a brush with bristles that double as sensors. One flick of a ring on the pen and your brush has just changed colors.

And lastly, Apple's intelligent pen could also be a pencil with real lead! According to Apple's filing, FIG. 13 the stylus can include actual lead for writing on real paper, which reflects on some of Apple's previous work on this front that mirrors a Livescribe-type of application.

The lead tip can act in combination with motion and/or orientation sensors (noted above) to provide motion measurements of the lead tip as it writes on real paper. And yes, Ka-ching, the lead could be mounted into a replaceable tip. The logic would also dictate that If the pen can follow the motion of your writing, it could therefore be recorded back to your device (iPhone, iPad etc).

Yet in the big picture, this is one of the ways that will justify Apple bringing a stylus to market. It will be able to serve many niche requirements so that it's profitable to bring to market. If that's what it's going to take to get a smart pen for the iPad to market, then let me be clear: I'll gladly pay for a smart pen from Apple if it really delivers fine printing, accurate writing and the ability to do other things like double as a light emitting instrument for live presentations (as the present in FIG. 9 above) or double as modern mobile flashlight.

Yes, there's a lot to digest in this report but it goes to prove that five years after Apple introduced the iPhone and downplayed the stylus – Apple has never stopped pushing for ways to reinvent the stylus into an advanced accessory that could serve so many consumers. The stylus of yesteryear that was just a dead-dumb stick of plastic is what Steve objected to, not a truly advanced smart pen. Why else would Steve Jobs and now Tim Cook allow their R&D teams to go at this feverishly for five long years if they didn't believe it would one day pay off.

Surely after this length of time, Apple must be nearing a starting point that could finally allow them to bring this to market. Come on Cook, shake things up - get it done!

Side Note: Did you know that if seen in isolation, iTunes+Accessories combined is a bigger business in terms of revenues than any of the other phone vendors except Samsung? If you didn't, then check out this report that shows that accessories is a huge business for Apple.