On February 7, 2013, the US Patent & Trademark Office published 32 patent applications from Apple for which 12 of them were continuation patents. In this report we briefly cover two of Apple's latest inventions. The first relates to a future iPhone's hearing aid detection technology and the second relates to Apple's application of nano-silica fiber coatings in such hardware as the iPhone. We close out our report with a listing of ten additional patent applications with one of them relating to the original iPod Shuffle that lists Apple's Late Cofounder and CEO Steve Jobs as the lead inventor.

In this first Apple invention covered in this report, Apple states that one factor contributing to the reduction in size of these devices is that from a visual stand point, users often find compact and sleek designs of consumer electronic devices more aesthetically appealing and thus, demand compact and sleek designs. This trend to smaller, lighter and yet durable poses challenges in the design of portable computing devices.

In order to maintain the compact size desired, wireless communication circuits (such as RF antenna) are integrated into other components. For example, the RF antenna can be formed as part of load bearing elements (e.g., external or then internal portions of the frame).

However, in order to utilize a portion of the frame as the RF antenna, RF isolation (i.e., maintaining multiple RF antennae separate from each other) must be provided. By properly isolating multiple RF antennae, that portion of the frame used as an antenna to be properly tuned to receive the frequencies the device needs to operate wirelessly. The RF isolation can be accomplished by utilizing materials with different conductive properties within the frame. From a design point view, it is challenging to find materials that are both strength compatible and integrate-able together in an aesthetically pleasing way.

In particular, materials as well as methods and apparatus for forming device components, such as load-bearing frame components, useable in a light-weight consumer electronic device with a thin and compact enclosure are described. In one embodiment, a topologically enhanced coating can be applied to a ceramic fiber that can, in turn, be mixed with a mold injectable thermoplastic composite well suited for use in portable communication devices. 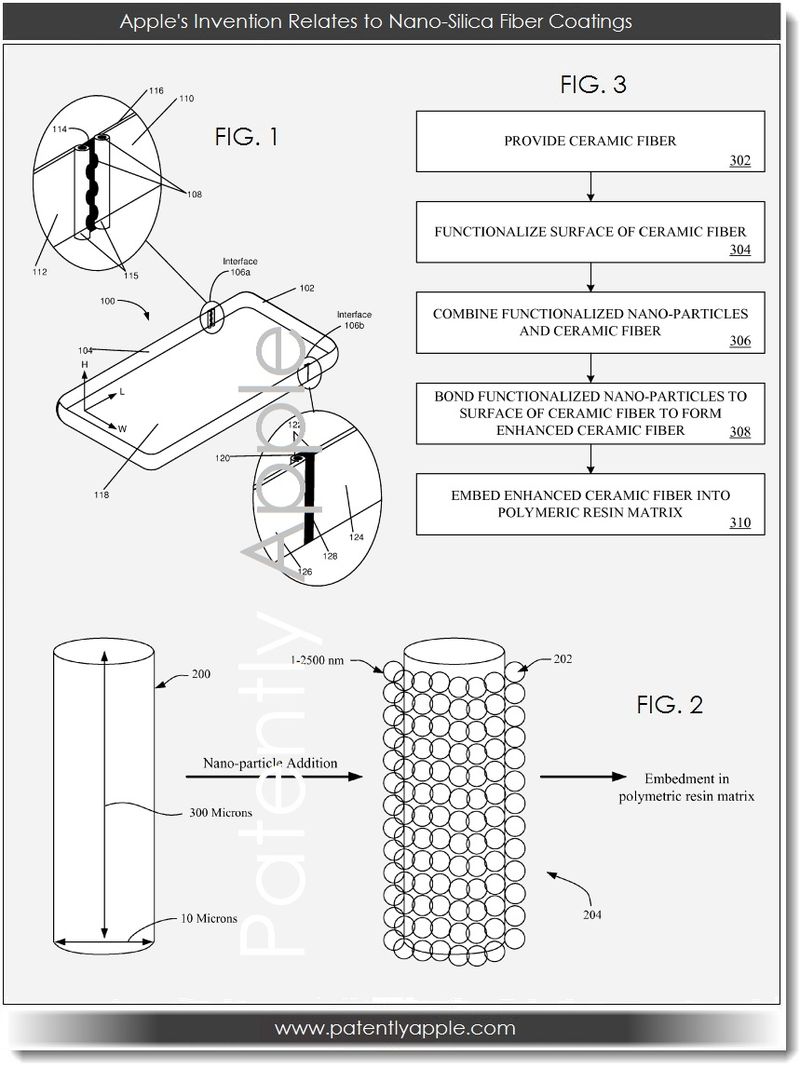 About Apple's Patent Figures: FIG. 1 is a perspective drawing of an external frame component found in Apple's iPhone; FIG. 2 graphically represents coating of a ceramic fiber with a plurality of functionalized silica nano-particles; FIG. 3 shows a flowchart of a process for providing a functionalized ceramic fiber.

Apple's patent application was filed by inventors Marta Giachino and Michael Pilliod in Q3 2011 under serial number 229619. Marta Giachino is a Ph.D. in Materials Science and Engineering at Stanford University who was a product design intern at Apple. Mike Pilliod is a senior composite's engineer at Apple.

In this second Apple invention covered in this report, Apple states that their invention generally relates to a hearing aid compatible iPhone configured to automatically determine whether or not the device is being used by a hearing impaired user who is wearing a hearing aid, and select a mode of operation based on this determination. 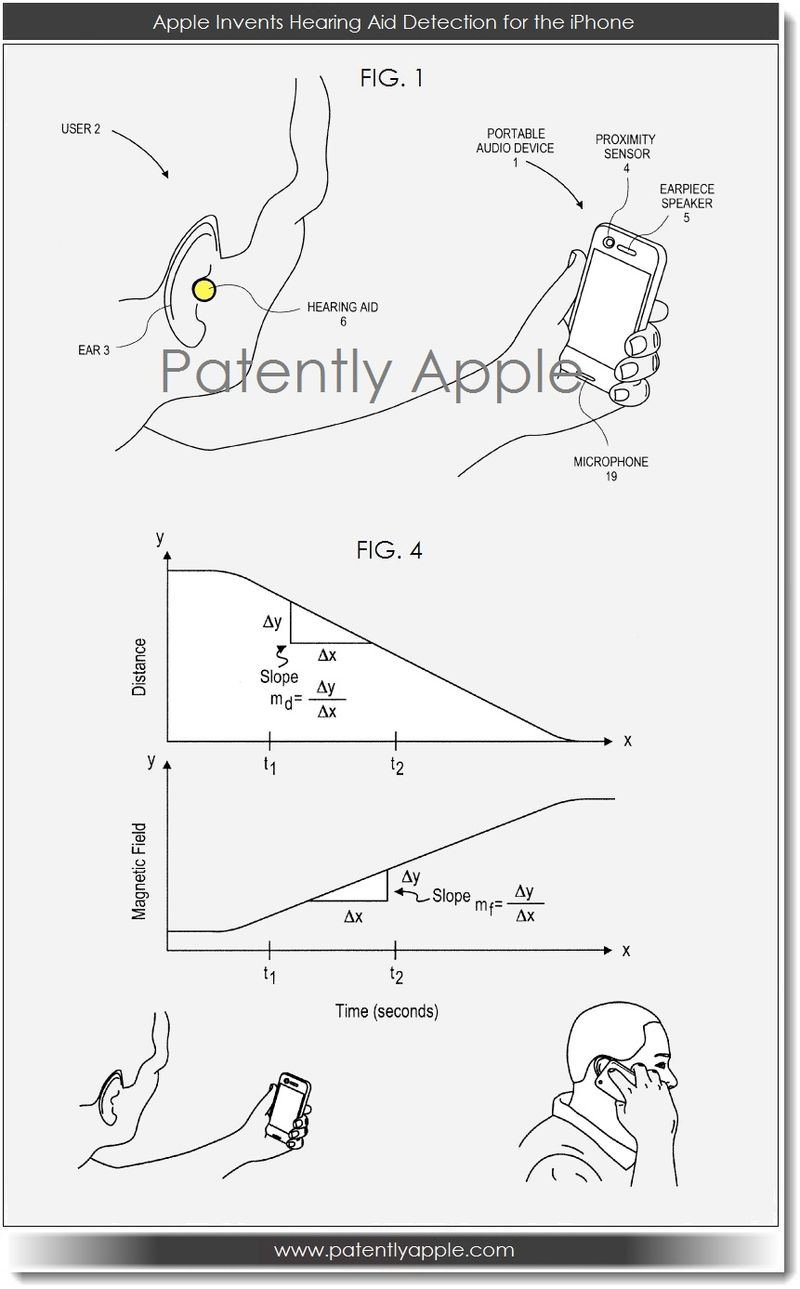 Although this is a continuation patent, we wanted to highlight this one as it relates to the iPod shuffle dating all the way back to 2005. There's only three names listed as inventors and they are the late Apple Cofounder and CEO Steve Jobs, Jonathan Ives and Anthony Fadell. 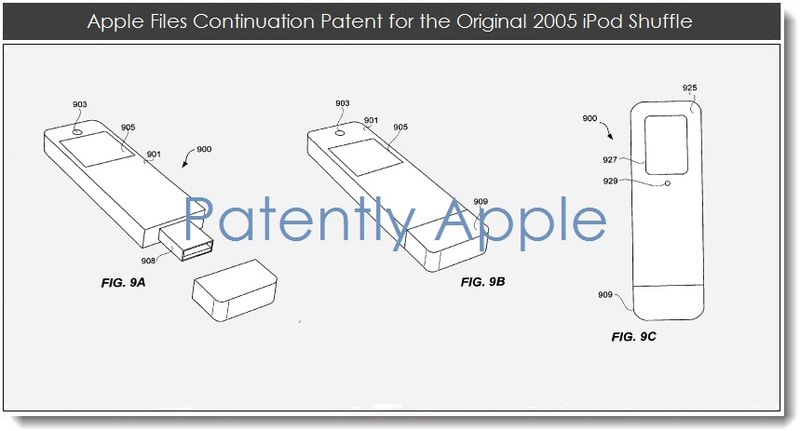 Some of Today's Other Patent Applications

While Patently Apple may not have highlighted the following patent applications today, they may certainly be of interest to some in the community.

02 System and Method for Branch Function based Obfuscation

06 Transmission Method and Related Base Station