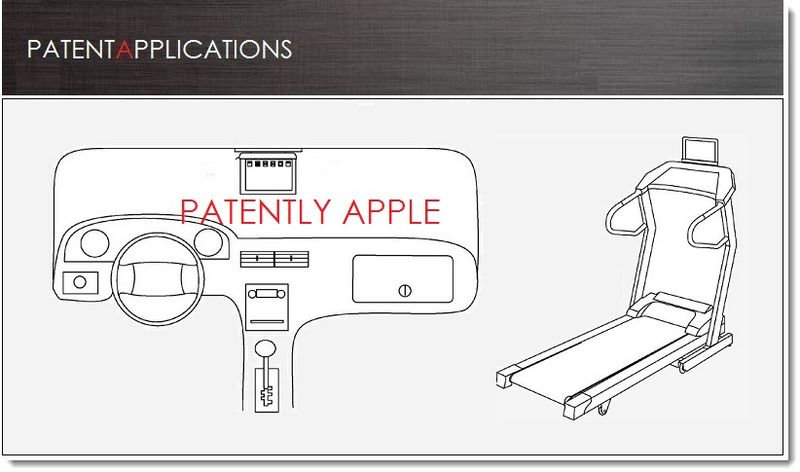 On February 28, 2013, the US Patent & Trademark Office published a patent application from Apple that reveals a system for magnetically attaching a tablet device to a supporting structure. Apple presents us with a series of possible new iPad stand configurations for such applications as a super advanced music stand, a way to connect two iPads together to create a notebook with a large virtual keyboard or a way to create a portable gaming system with an advanced video game controller. Apple has some wild ideas worth noting in this invention.

Tablet devices are used in an increasingly wide range of applications. In many of these applications a way for conveniently mounting the device is required. A number of manufacturers have tried to produce such a device; however since most tablets have no built in mounting mechanism, mounting devices tend to be somewhat cumbersome and generally do not allow for easy removal.

Therefore, what is desired is a way for securely attaching a tablet device to a stand where it can be removed and replaced with ease.

Tablet devices are used in an increasingly wide range of applications. In many of these applications a way for conveniently mounting the device is required. A number of manufacturers have produced mechanical devices to accomplish this purpose; however since most tablets have no built in mounting mechanism the mounting device tends to be somewhat cumbersome and not easily removable. For example, in an upscale restaurant that has switched from paper menus and waiters to a tablet based ordering system customers might prefer to remove the tablet device from its stand while they peruse the menu. Forcing the diners to remove the tablet from a complex mechanical contraption will probably detract from the overall experience. It might even contribute to some of the tablet devices being dropped or damaged. Although most tablets do not include external attachment features, the iPad 2 does include magnetic attachment points. The magnetic attachment points have been used nearly exclusively for attaching foldable cover attachments to one side of a tablet device enclosure. Although the foldable cover attachments do conveniently protect the screen from damage, they are not particularly compatible for use as a mounting system. This issue can be overcome by designing a more rigid attachment accessory configured to match up with the magnets built into the tablet device.

Apple's patent FIG. 2 shows one use of the magnetic stand. In this embodiment the magnetic stand is attached to a small tripod via a one quarter inch tripod mount. In this configuration the tablet can be used by a photographer or videographer for reviewing photos or video as they are taken. A wireless transmitter can send data between the camera and the tablet device via a Wi-Fi signal, Bluetooth protocol, or even through an alternative signal received by a wireless receiver attached to the tablet device. In this way a light and portable secondary display can be easily configured for reviewing and displaying products without having to bring along a larger laptop or desktop computer. 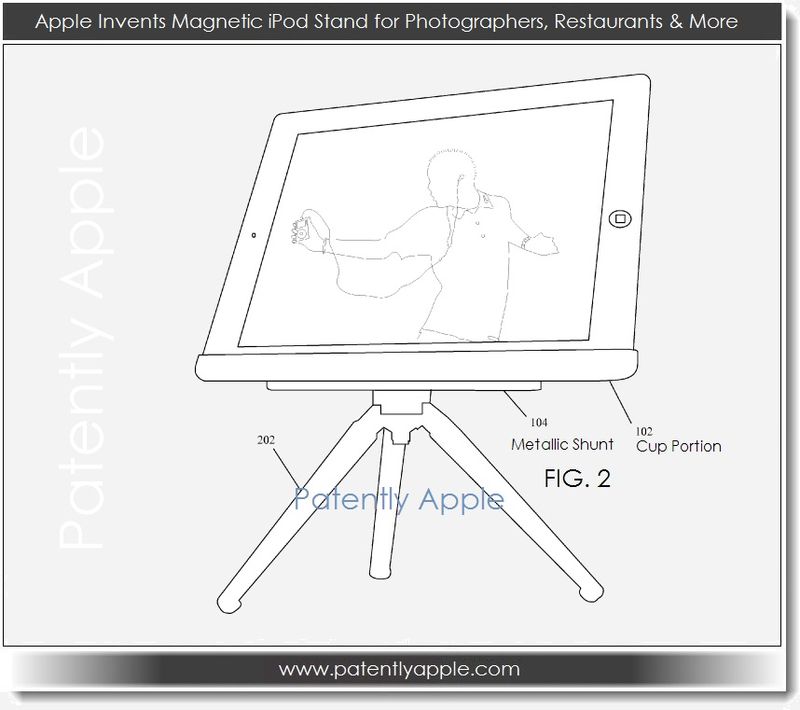 This configuration can also be useful at a restaurant table allowing specials to be displayed; customers could then touch the displayed special, and then receive more information. If the device were also configured to accept orders the customers might decide to remove the device and enter further details such as table location or payment means into the tablet device.

In this embodiment Apple's iPad holder can be used to support a music stand used to display sheet music on tablet screen. In this way, the strong magnetic connection between the tablet and the tablet holder would allow for a musician to quickly swipe the screen when page turns are required, without having to worry about the possibility of knocking it off its support.

A more advanced software configuration can allow the tablet device to turn the pages for the musician at appropriate points in the song. Another software implementation can allow the music to be advanced line by line. In another implementation a conductor can even wirelessly adjust the flow of the music played by a band with another stand mounted tablet, allowing the band to quickly adapt to last minute changes in a musical program. 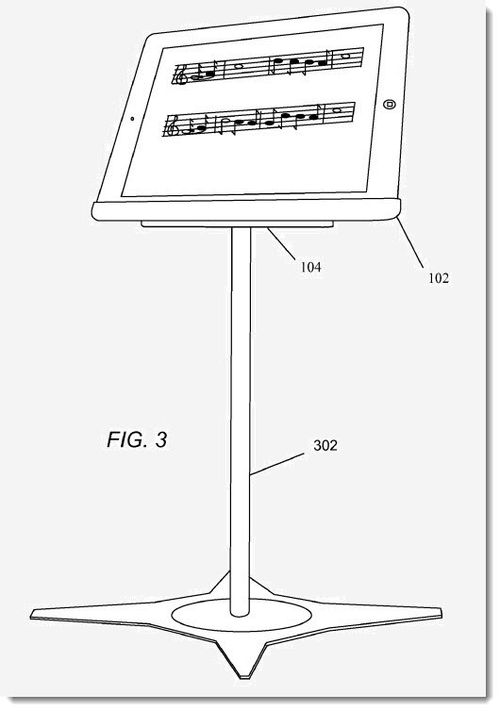 Apple's patent FIG. 4 shown below illustrates another embodiment of the tablet holder that can be configured with two tablet devices secured together by stiff hinge 402. Tablet devices which only contain a strong set of magnets on one side of the enclosure can be inserted into the tablet device holder in alternating directions as shown in the figure to maximize the magnetic attraction forces. 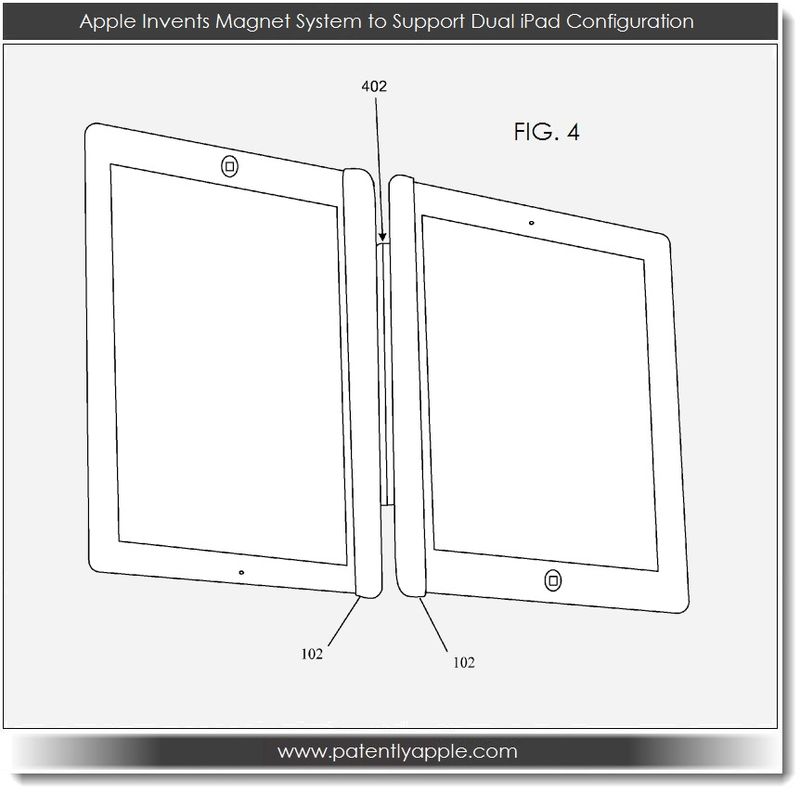 In this configuration the tablets can be configured to work together cooperatively. The cooperation can occur over a wireless channel, or the tablet devices can be configured to include a wired connector (not shown) allowing communication to run through a wire that runs between the devices and the connector. Once a communication channel is established the tablet devices can work together to allow activities like book reading or even be configured in more of a laptop arrangement. Without the extra magnetic power enabled by the cup portion of the tablet holder the tablet holder would not be strong enough to maintain a tablet in the orientation normally assumed by a laptop computer screen. In this way the described embodiment allows a user with two tablet devices to configure a virtual keyboard on one tablet device with a working document on the second tablet display.

This idea is supported by an invention that Apple revealed back in 2010 concerning an incredible shape shifting device interface.

Apple notes that in other embodiments of the magnetic stand accessory items can be securely attached to a tablet device. This might include devices such as video game controllers, physical keyboards, or even a robust stylus holder. In particular video game controllers need a strong connection to a tablet device to provide a robust control configuration for serious gaming enthusiasts.

Apple's patent FIG. 5A shows a magnetic stand supporting a tablet device from above, mounted to vehicle console of an automobile. This makes it easy for a passenger to securely mount the tablet device inside the car and to easily remove it before leaving the vehicle.

A vehicle mounted tablet mount can allow a number of additional features to be built into the mount. In this way the tablet could automatically connect to electronic devices built into the car itself. Given prior setup and pairing, Bluetooth and WiFi radio connections could be established moments after the tablet was snapped into place.

With these connections activated car manufacturers could allow navigation, backup camera video, music selection, or even vehicle performance data to be displayed in the tablet device. 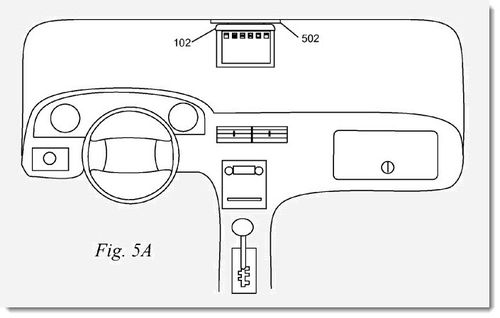 Since a majority of tablet devices include microphones, voice automation can allow drivers to safely interact with the device while driving. A magnetic stand is shown attached with a tablet device in this manner to vehicle console 502 and can be attached via a clutch hinge which would allow the tablet to fold up into vehicle console while not in use.

Hall Effect sensors built into the face of the tablet device could sense an additional magnet or magnets built into vehicle console of the vehicle, and the resultant magnetic field can function as a signal to the tablet to automatically secure itself once the tablet is rotated up into the console in close proximity to those magnets, and then to reactivate itself once it is pulled back down, thereby conserving battery life and easing activation.

An iPad Stand for Treadmill: Watch TV while Working Out 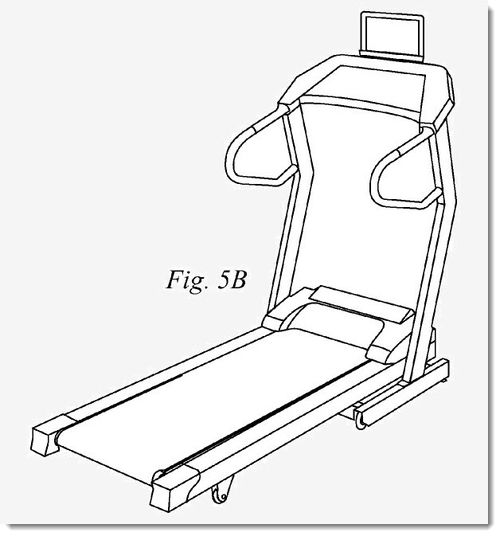 In FIG. 5B a magnetic stand is configured on the front of a treadmill for watching a movie or a television show while jogging or walking. The tablet could also be configured to control various aspects of the treadmill.

Apple credits Matthew Rohrbach as the sole inventor of this patent application which was originally filed under serial number 223110 in Q3 2011 and published today by the US Patent Office.

I'm personally loving the filed patent applications and granted patents, to date, for 2013. The areas of R&D down to the unique manufacturing patents are going to pay huge dividends for Apple.

Today's latest filings are quite impressive.