On February 7, 2013, the US Patent & Trademark Office published a patent application from Apple titled "Image-Based Authentication." The inventor noted on the patent application is Apple's Quality Assurance Manager for Apple TV, Ethan Lowry. Apple's invention generally relates to authenticating a user of a computing device by displaying one or more images to the user and receiving input that identifies object(s) depicted in the one or more images. Apple currently has a number of next generation authentication systems in the wings. One similar to today's invention was published in September 2012 regarding Facial Recognition. A second involves a two-step slide-to-unlock process and a third that is most promising involves a straight forward fingerprint scanning process associated with today's slide-to-unlock process. Today's invention while interesting, is a little complicated in contrast to Apple's one step fingerprint scanner. Yet until Apple actually introduces their next generation authentication system, we can't rule out any of their future approaches.

Handheld devices, such as tablet computers, laptops, and smart phones, have become ubiquitous. Users sometimes misplace their handheld devices or inadvertently leave them in public places. Such misplaced devices are easy prey for thieves. To dissuade thieves from stealing handheld devices (or people from accessing their friends' devices), many software manufacturers require a user to provide input that "unlocks" the handheld device. Such input may be a passcode of four or more characters. Without the required input, the user is not able to access data (e.g., work-related data, personal photos, etc.) stored on the handheld device or any services (e.g., a phone service) provided by the handheld device.

However, this approach for authenticating a user can be easily compromised. For example, a thief sitting on a bus may notice the four characters that an unsuspecting person entered on the person's smart phone. As another example, a thief may pick up a tablet computer in a public place and discover, based on finger prints on the display of the tablet computer, which characters were recently selected by the owner of the tablet computer. As another example, a person sees a friend enter a password into the friend's laptop. Later, the person accesses the laptop and views all the web pages that the friend has visited in the last day. 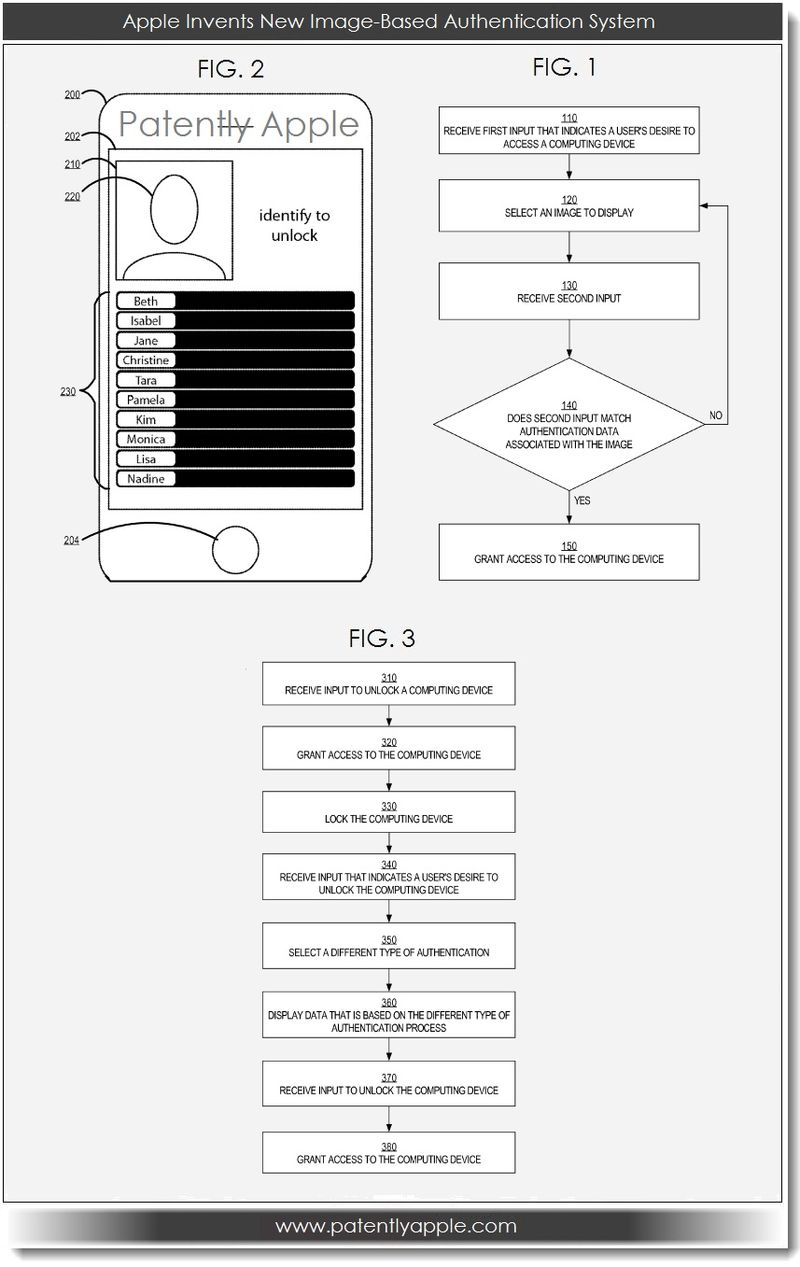 Apple's patent FIG. 1 is a flow diagram that depicts a process for authenticating a user to a computing device that could be an iPhone, iPod touch, MacBook or iPad. After hitting the "home" button on a handheld device, the proposed authentication system begins.

In Step Two (# 120 on FIG.1), an authenticating process executing on the computing device selects an image to display. The image depicts at least one object. The image is stored on the computing device at the time the first input is received. The object may be of any type, such as, for example, a person's face, an uncommon animal or insect, or a place of which only the user (or people in the user's circle of friends) might know. Also, the image may be stored in one of many types of formats.

In Step Three (# 130 on FIG. 1), the computing device receives second input from the user. The second input may be based on text input or voice input. For example, after displaying an image that depicts a face of the user's sister Jane, the user may speak aloud, "Jane."

As another example, the user may type "Jane" on a physical keyboard of the computing device or on a graphical keyboard that is displayed on a touch screen of the computing device. Alternatively, step 120 might also include displaying, concurrently with the image or immediately after ceasing to display the image, a set of names. Then, as part of step 130, the user selects one of the displayed names that the user believes identifies the object.

In Step Five (# 150 of FIG. 1), the authenticating process grants the user access to the computing device.

Setting up the Authentication system will involve using iPhoto on your device(s) or a version of it on iCloud.

Random Points about the System

Although the user could chose to set up the authentication system for easy access by using only one image to identify, users who want a higher level of security will use a "multiple rounds authentication" process using multiple images. Apple states that each image is displayed, the user will have to provide the proper input that identifies (or describes) an object depicted in the image. If the user provides the correct input for each displayed image, then the user is granted access to the computing device.

A multiple round process may require other types of data, such as entering a four-digit PIN, a password, a typed (or spoken) name of an object depicted in a displayed image, or a selected name from a set of names that are displayed in association with a displayed image. Another data type may include location based information stored in a photo.

A Word about Today's Continuation Patents

02. 2012 from 2006 Patent Titled "Access Category Enforcement in Wireless Local Area Networks." Note: This is a patent that Apple acquired. One of the inventors by the name of Osama Aboul-Magd is noted on the net as being from Huawei Technologies.

04. 2012 from 2007 Patent Titled "Modulation Division Multiple Access." This is an acquired patent from Canada's Nortel.

07. 2008 Patent Titled "Secure Provisioning of a Portable Device using a Representation of a Key"