Android & iOS Took 91% of the Smartphone OS Market in 4Q

IDC's latest report isn't exactly a shocker but still interesting to see the breakout of the top 5 Smartphone operating systems. Ramon Llamas, research manager with IDC's Mobile Phone team stated that "The dominance of Android and Apple reached a new watermark in the fourth quarter. Finding an Android smartphone for nearly any budget, taste, size, and price was all but guaranteed during 2012. As a result, Android was rewarded with market-beating growth." Over the next few years, these numbers could dramatically change. 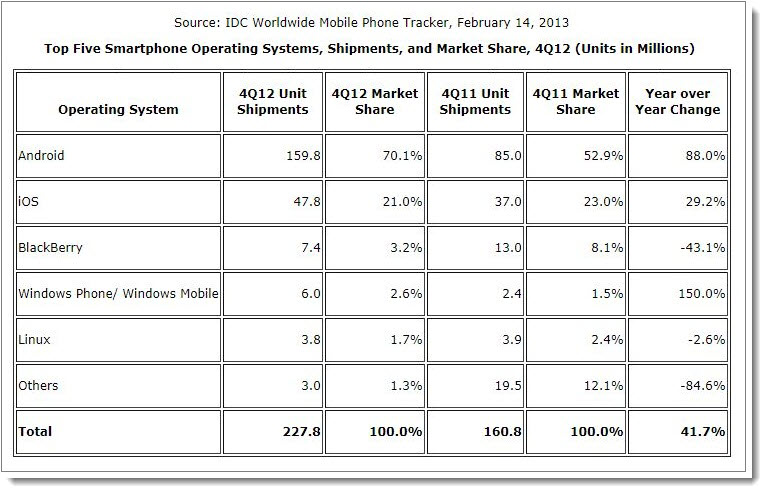 Some of the factors that will disrupt today's smartphone operating system leadership race will be Samsung taking on a new operating system of their own based on the Linux and WebKit foundation that we outlined in our report yesterday. Samsung may initially reserve their new OS for high-end smartphones and use Android for bargain basement phones. But once their new OS is firing on all cylinders, they're likely to kiss Android goodbye.

Another scenario could have certain Samsung smartphones offer more than one operating system. Intel is a partner in Samsung's new OS and some of Intel's next generation CPUs will offer multiple OS support.

Another factor in the smartphone OS race may involve HP. According to a new report published late yesterday, HP is likely to go with Android over Windows 8 for tablets and future phones. This could help Google's Android out if the bottom falls out from underneath them with Samsung full departure.

I only wish that Apple would introduce iOS 7 or 8 for their own high-end toys and licensed out iOS 6 to a discreet number of OEM's to cover the lower end of the market. Sadly Apple will never do it. Let's hope that iOS doesn't eventually go by the way of Apple's 1996 Mac OS due to their stubbornness to stay pure.

Yet for today at least, Apple's iOS remains the number two smartphone operating system in the world ... in terms of shear smartphone volume. That has nothing to do with which smartphone OS is actually the best.

Side Note: What 7 Million Jailbreaks Are Saying. Is Apple Listening