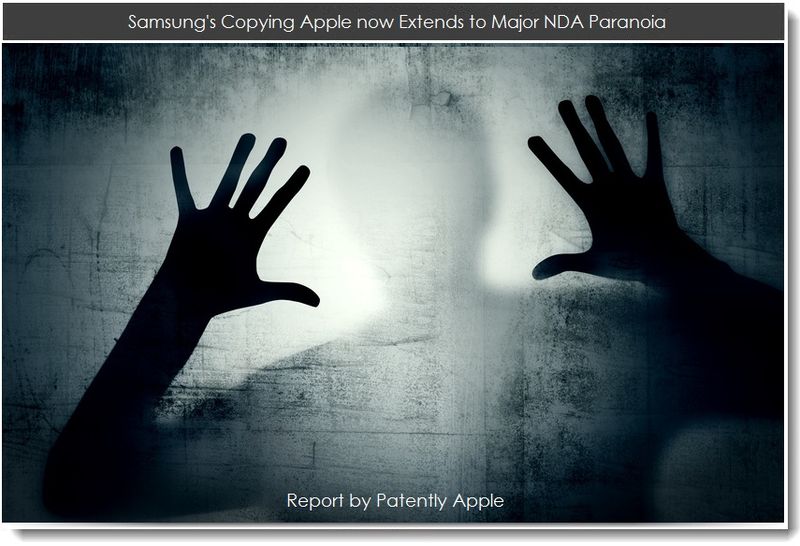 A California Court found Samsung guilty of patent infringement against Apple in 2012. The copycat is now getting eerily paranoid about their future product designs. According to a new report published by Korea's Electronic Times this morning, Samsung Electronics, while in the process of developing a next-generation smartphone, has entered into a series of non-disclosure agreements (NDA) with its subcontracts. The aim is to prevent the leakage of information related to its new products amid intensifying patent competition with Apple over design and product specification. In another Electronic Times report this morning, they're reporting that financial information provider FnGuide is stating that Samsung Electronics' turnover and operating profits are expected to decrease 4.93% and 5.88% quarter on quarter to 53,240.6 billion and 8,282.9 billion won in Q1 of this year, respectively. The net profit is estimated to decline 4.58% to 6,804.7 billion won, too. Hmm, it would appear that Samsung's Galaxy SIII momentum is beginning to crash and burn.

All these Apple copycat businesses have emerged because they are shitting themselves as they cant compete on innovation and ideas. Global brands are going down the toilet faster than ever because they cant compete, so these companies are so desperate to just do anything abit different that they look at the 1 company that has continuously innovated since its creation - Apple.

NONE of these companies will EVER be Apple. They aren't Apple and will never achieve that. For Samedung to be Apple the whole global empire would have to be shut down and started again from scratch - so it will never happen and all they can do is copy, copy copy.

Samsung never did that before, "publicly." Who are you kidding? They want to be Apple so badly they'll copy everything Apple did to make them number one. Yes, other company's do it, they just don't let the media in on it so that's it's mysterious.

Samsung aren't copying Apple they are just following good business practice like a million other companies out there.

The point you missed Anroid-head, is that Samsung is copyiing Apple's use of secrecy with a tool like NDA. Samsung didn't use this in the press before. They're simply copying Apple's media marketing savviness. Copy, copy, copy. What else is new?

Yeah, I have worked for many an electronic manufactures and NDA's are par for the course. To claim this is an Apple thing (The secrecy/NDA is an Apple trademark) is hilarious.

Hey Joe, you windows robot you. That's a useless observation. Most tech companies have their devices made up from a number of suppliers. That's what Supply Chain management is all about. Products and parts shift all the time and if you're stuck with your own manufacturing, you have to retool, retrain and in the era we're now in, you could get killed in two quarters if you can't change a part on a new device on a dime.

I appreciate your honest feedback, Joe. I just don't happen to agree with your point having any relevance.

What percentage of an iOS device like the iPad or iPhone is actually made by Apple? Which display will apple use in a future TV? Samsung, LG, Sharp? All with just an Apple logo on it.

I am windows phone robot not android robot.
I am glad to entertain you. beep beep

Does apple make robots because samsung does.

Thank you for your typical Samsung humor, Joe.

Samsung made a button riddled phone prior to the iPhone and was anything but smart. Reinventing how to use a touch display as a phone and creating the new ground breaking iOS changed phones forever. Who are you kidding man.

If Apple delivers a new TV it won't be the boring crap we have today with Android for TV. But that's an argument for the future.

I bought a Samsung Stove and it lasted 2 years and 6 days. I used their self-cleaning feature and the sensors melted. Would these assholes give me a break? No and that's 6 days after my warrranty and it was using their own feature as directed in their manual that screwed up my stove because they copied somebody's design and couldn't get the sensors right. That's the real Samsung. Screw their customers.

I went looking for phones this holiday season and checked out the Galaxy SIII and Note 2. They had a nice large display with half of the quality of a retina display. Their so called ePen was really a screwy crayon. Complete garbage.

Be objective. Ha. You're an Android robot but I thank you for taking the time to entertain me today.

Yes, Samsung makes hundreds of items, and Samsung is a leader in many sectors, including the smartphone sector. My first cell phone was a Samsung, in the late nineties. Apple did not have a phone before 2007. Samsung leads and apple follows. Rumour has it, that apple will release a TV. Apple fanboys will claim that apple invented TVs, and that TVs did not exist before 2013. Apple will sue Samsung for making TVs with rounded corners. Please take a objective look at Samsung's inovations .

Samsung makes stoves, microwaves, fridges, cameras and about 100 other items which may include toe nail clippers for all I know. So comparing a focused technology leader like Apple to a company that makes everything but the kitchen sink (which they're working on)is a silly gauge for innovation. It's just proof that Samsung protects their products just like Apple does.

Patents for 2012: samsung had patents 5081 and Apple had 1136. Apple claims to innovate but the patent office does not agree

You're starting to believe in the Samsung kool aid, James. The secrecy/NDA is an Apple trademark, that's the butt of the joke that Samsung thinks it'll work for them now.

Hey, I cover Samsung patents, and on paper they have some nice ideas. But until they come to market with real products, it's just Samsung pretending to be an innovator.