More Turmoil at Foxconn Could Lead to Future Boiling Point

According to China Labor Watch and information gathered on Chinese websites today, we know that a strike took place at Foxconn Group's Xin Hai Yang Precision (Jiangxi) Ltd. factory on January 11. Multiple sources reveal the strike was based on workers' demands for a raise in wages. According to China's IBTimes, the strike occurred around 8 pm on Friday January 11, 2013 when 1000 or more Foxconn workers took to the streets to protest against poor meals, management treatment and salary issues (see the photos below). Currently, the workers' monthly base salary is $209 USD. During peak seasons, workers may earn up to $417.8 USD, including overtime, if they work 12 hours a day, 26 days a month. But during off seasons, which last from February to June, workers may only earn the base salary. After deductions, the workers are earning merely $177 USD per month.

Further, Foxconn provides no communication channels for workers to voice their frustrations. According to strike participants, they carried out this strike to demand higher wages. And if Foxconn refuses to raise wages, then they will not return to the factory from home after Spring Festival this year.

On the surface it would appear that the any strike at this facility could potentially affect Apple, though no specific companies were identified. Although order has been restored at the plant momentarily, what happens after the Spring Festival, which begins on February tenth, is what could be concerning. 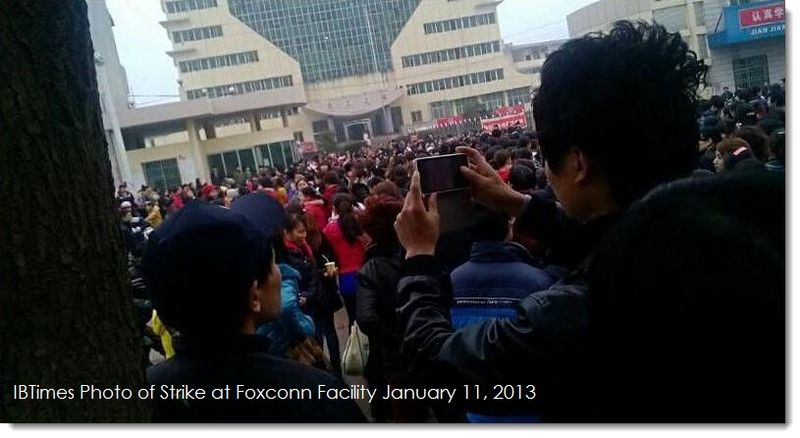 According to a China Labor Watch source, Foxconn will conduct labor union elections in 2013.