From an Intellectual Property stand point there are a number of races going on in techland on many fronts. There's the race to find the next generation smart pen, there's a race to bring smart eyewear to market and there's even a two horse race to bring gesture-based search to market in the not-too-distant future between Google and Microsoft. Yes, Microsoft has filed a new patent application with the US Patent Office covering gesture-based search that could extend to smartphone, tablets, the Xbox, tiltable desktop multitouch displays, next generation Ultrabook convertibles and more. Our cover graphic covers patent FIGS. 12A-12E as basic examples of specific gestures being considered. The dot shown in the bottom center example, for instance, has an added value that indicates that the search query should weight a particular world or term more heavily. While Google's 2012 patent filing shows that they have a substantial lead over Microsoft's Bing team in this area of gesture-based searches, I wouldn't count Microsoft out of this race just yet. In fact Macites may even welcome the new features in the future.

Altering the Scope of a Search using Gestures

Another example of gesture based search involves Microsoft's patent FIG. 4 shown below which illustrates an example technique for altering a scope of a search by resizing the representation 302 defined by the search gesture to include a different region of content to refine the search, thereby broadening or narrowing a scope of the search. 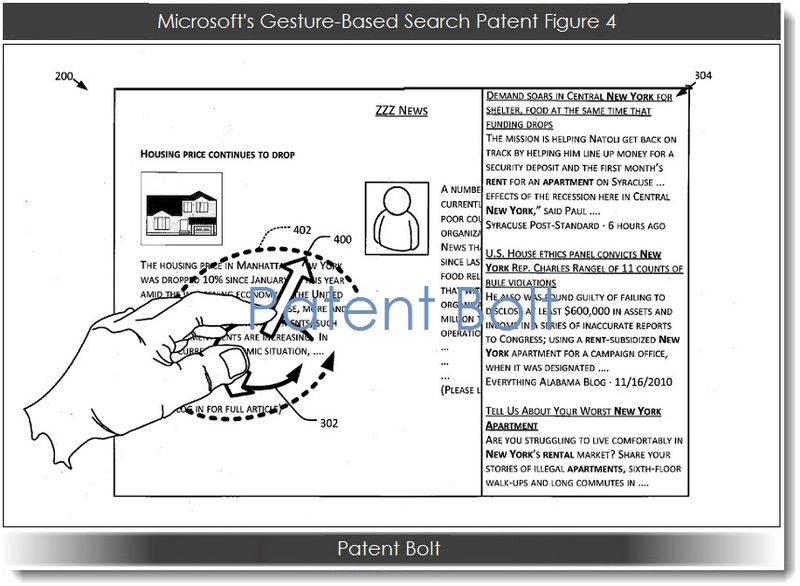 Microsoft's patent FIG. 1 is a schematic diagram of an exemplary environment including a client device usable to implement gesture-based search 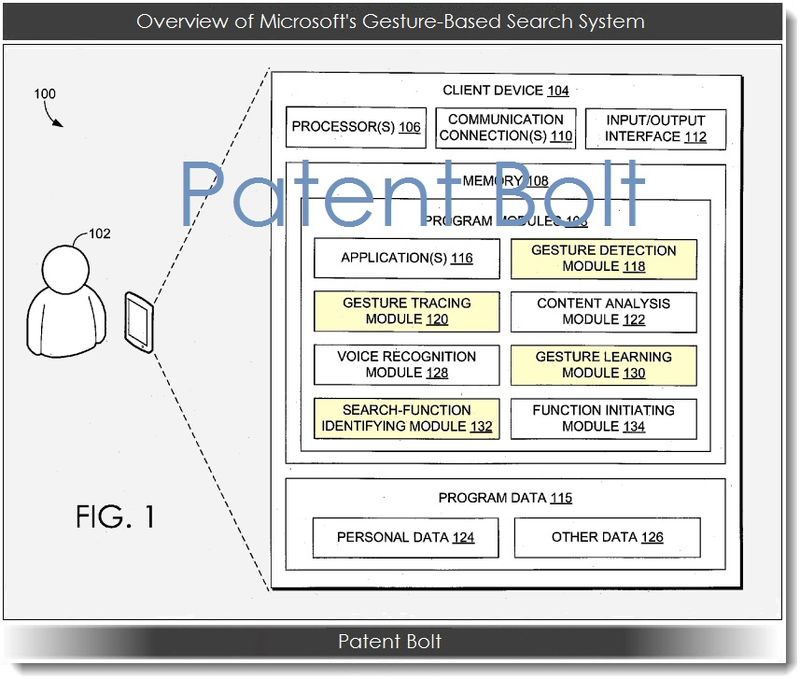 If you're interested in exploring Microsoft's next generation search features that are in the works, then check out patent application 20130006957.

Microsoft's patent application was originally filed in Q3 2012 and published by the US Patent Office earlier this month.

There's a proverb that goes like this: An enemy of my enemy is my friend. I'm sure that Apple will be silently hoping that Microsoft succeeds with this next generation approach to search – because you never know, Bing may one day be the default search engine on future Apple devices. Time will tell.

Side Note: When covering IP outside of Apple's on our site we'll be using "Patent Bolt" templates going forward for easy clarification. We've also just added a new "Patent Bolt" category to our side bar so that we could properly catalog our non-Apple IP reports going forward.