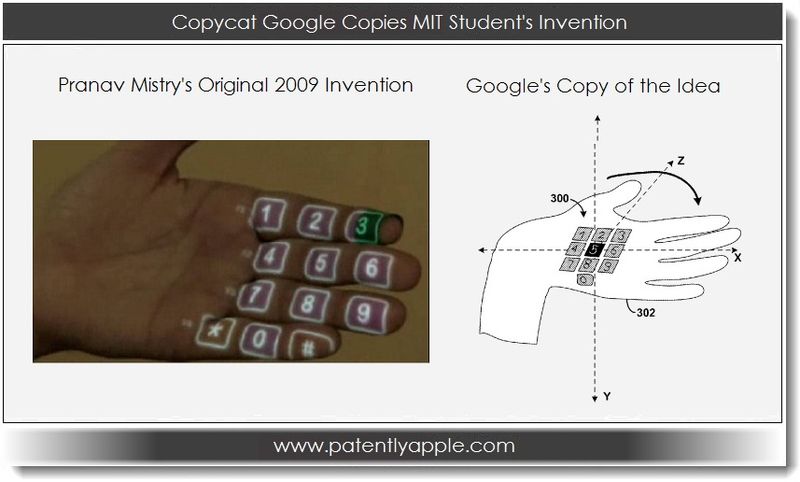 In 2009 we posted a report that pointed to a fascinating invention by MIT's Pranav Mistry who had invented a wearable device called the SixSense. Our report included a TED video of Pranav introducing his invention to the world. One of the applications created by Mistry was having his device project an active keypad onto the users hand or a wall so that they could key in a phone number. Apparently the engineers at Google were so inspired by Mistry's invention that they decided to copy and modify it for their future Project Glass product that's due to arrive sometime in the mystical future.

As you could see by our cover graphic, we juxtaposed one aspect of Mistry's invention to Google's patent figure. Boy do those guys know how to copy or what? This comes right down from the leadership of a CEO who thinks that Apple is boring and that great "Moon Shot" ideas like his driverless car is the next great thing. I guess that would be true if you were a boring android. I think that someone is trying to replace Steve Jobs as the tech industry's next visionary. Unfortunately Larry Page falls so short of that mark it's not even funny. But to Google's blind fans, it sure sounds nice on paper.

Side Note January 19, 2013: In the year Pranav Mistry presented his SixSense inveniton, he had joined Microsoft as a Research Intern. Some of his past patent applications are listed here. Two of his patents unrelated to the SixthSense were filed in the US (one, two) while the majority of his patents were filed in India. One that might cover his SixthSense invention is titled "Multi-mode multimedia device and computing system."

Here are the first two lines of Google's patent abstract:

So what were you saying about Google not using a projector?

While perhaps influenced by Mistry's demo, and superficially similar when you look at the drawing, Google's invention is most certainly not a copy. Rather than projecting an actual image of buttons on the user's hand, as Mistry's system does, Google glasses overlays the image in the user's field of vision.

I quoted Page. How clear do you need it.

Google is not even a genius in copying, yet there are so many people who are hypnotized into thinking that google is an innovator; and thae ignoramus would shell out their savings to buy google crap.

What's to stop Mistry from opposing the patent, heck even profiting off of it by demonstrating that he has prior art? Google couldn't afford the negative PR if they decided to oppose him.

Didn't Page just say that the pace of innovation was dead?

Google is the worst tech company. What have they given us besides so-so search that's loaded with advertising fecal matter?

Great post. Google has proven time and again that they are full of shit with thier "don't be evil" BS, but it always gets sweept under the rug. Other examples include hiring over a dozen lobbying firms, stealing data and being caught lying about it, abusing thier monopoly on search, getting fined for circumventing internet browser (Safiari) privacy features..