Apple has filed a notice of motion, motion to compel compliance with a subpoena with the court in Northern California which seeks to compel Google Inc. to comply with the August 27, 2012 subpoena issued by the Northern California Court. The anticipated discovery would assist Apple in the preparation of its case in Motorola Mobility v Apple. Motorola has accused Apple of infringing several of its patents, and Apple has counterclaimed, asserting several of its own patents against Motorola. Apple alleges that seven of its patents are infringed by Motorola's mobile phones and tablets that perform specific functionalities or features enabled, executed, or supported by Google's Android mobile operating system and related proprietary software applications.

Such features concern Google Maps, the Android Market and Google Play stores, notifications, text input auto-correction, and unlocking the phone performing a sliding gesture on the touchscreen. Apple additionally alleges that three of its patents are infringed by Motorola's set-top box products. In recent events, Google announced the sale of Motorola's set-top box division to Arris Group, Inc. on December 19, 2012. Apple's Subpoena to Google concerns these issues and Google's noncompliance impairs Apple's ability to develop its infringement and damages case against Motorola.

The court document states that "this is not your typical motion to compel compliance with a subpoena and Google is not your typical third party. Google is the parent company of Motorola, the defendant and counterclaimant is the litigation underlying this motion. Further, Google's Android operating system forms the crux of Apple's infringement case against many of Motorola's accused products. In fact, even before Google's acquisition of Motorola was final, Google demanded the right to control Motorola's litigations against Apple. Indeed, Google and Motorola are even represented by the same law firm in Motorola's various litigations against Apple across the country. Similarly, Google has announced that it is selling Motorola's set-top box business to Arris and granting Arris a license to its patent portfolio. Many of Apple's patents at issue are directed to that portion of Motorola's business and the acquisition clearly includes relevant information to the valuation of Motorola's patent portfolio that it licensed as part of the deal.

Despite Google's central role in the Motorola business at issue in these litigations and the undeniable relevance of the information it possesses, Google has repeatedly attempted to resist discovery and still has not provided numerous categories of requested information in the current litigation in Florida. Time and again, Google has forced Apple to seek the Court's assistance rather than turn over the requested discovery and its prior attempts to thwart discovery have not been well received.

Undeterred, Google is yet again attempting to block discovery into crucial aspects of this case. Over four months have passed since Apple's subpoena, but to date Google has only produced a limited subset of documents responsive to the majority of document requests. Google has failed to do so despite (i) Apple's multiple requests to Google that it comply with the Subpoena, (ii) Apple's efforts to assist Google in complying with the subpoena by providing Google with detailed information regarding the claims at issue; (iii) Google's own agreement to comply with Subpoenas by November 1 or shortly thereafter; and (iv) Google's subsequent agreement to comply with the subpoena promptly upon entry of an amended protective order, which was entered on November 28, 2012.

Apple can wait no longer for this crucial discovery. Google undue delay, broken promises and failure to assure timely and fully responsive document productions have and continue to prejudice Apple. Accordingly Apple respectfully requests that this Court order Google to promptly produce documents and designate witnesses in response to Apple's Subpoena. 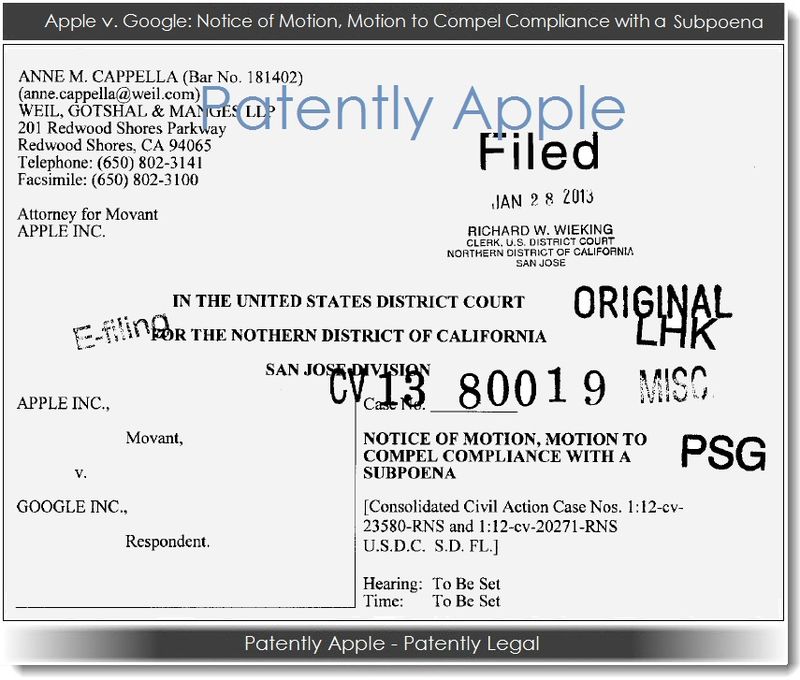