Apple's late CEO Steve Jobs told Biographer Walter Isaacson that he'd "like to create an integrated television set that is completely easy to use. It will have the simplest user interface you could imagine. I finally cracked it." In that very same timeline, Apple's engineers were working on his dream TV and in a patent application published this morning, we get a tiny glimpse of the enhanced audio system that may be accompanying this future HDTV. The system will also intelligently integrate surround sound-like quality for video conferencing for the home or work. Apple's TV will also be able to work with FaceTime and create a unique audio experience whereby the voices from multiple participants will be heard in the exact direction that they're positioned on the screen. While it's not the Killer HDTV patent we're all still waiting for, it's the next best thing. Today we could safely say that Apple's Killer HDTV is real, at least on paper.

Many audio/visual output devices may be able to have an improved audio or video output, if the audio output is able to be adjusted to the environment, surroundings, circumstances, program, and/or environment. However, many audio and video output devices may require a user input or interaction in order to change a particular output or may not have variable output settings. In these instances the audio and/or video output may not be performing or outputting the best quality sound or images for the particular environment, programs, circumstance, or the like.

Apple's invention may take the form of a method for outputting audio from a computing device. The method may include detecting a user by a sensor. Once a user is detected, a process determines whether the user is an optimum range for a current audio output of an audio output device. If the user is not within the optimum range, the processor modifies the audio output. Additionally, the sensor determines whether the user is orientated towards the computing device. Based on the user orientation the processor adjusts an audio device.

Still other examples in this patent filing may take the form of a system for enhancing audio including a computer and an output device. The computer includes a sensor configured to determine a user location relative to the computer. The sensor is also configured to gather environment data corresponding to an environment of the computer. The computer also includes a processor in communication with the sensor and configured to process the user location and the environment data and adjust at least one of an audio output or a video output. The output device is in communication with the processor and is configured to output at least one of the audio output or the video output.

In an exemplary embodiment, the invention may take the form of a system for providing an enhanced audio experience for a user. The system may include a computer or other electronic device and audio output devices (which may be integrated, separate or a combination of both from the computer 102). The computer may be substantially any type of electronic device with processing capabilities, including, but not limited to, a laptop, tablet, smart phone, audio player, and television.

Apple's patent FIG. 2 illustrated below is a block diagram of the system illustrating an exemplary audio/video processing paths from input to output. In one example, the video sensor 134, sensors 124, and audio input 132 may provide image data regarding the user and/or the environment (e.g., room, surroundings) of the computer or television. The processor 118 may then enhance or alter the audio output characteristics provided to the speaker 110 to provide an enhanced audio experience. 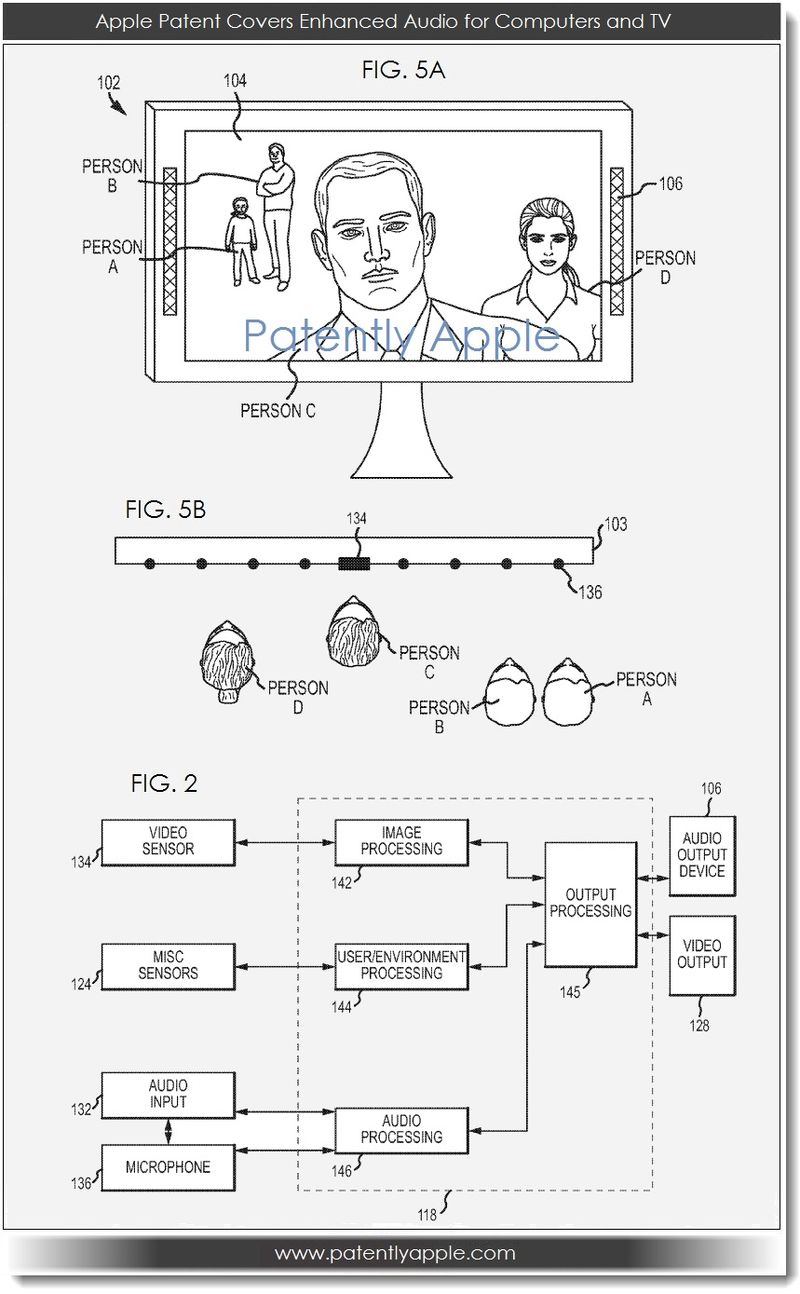 Advanced Video Conferencing for Work or at Home

In other embodiments, the system may be configured to alter an audio output based on a location of a video conferencing window or instance. Apple's patent FIG. 7A illustrates the computer/television with an instant messaging, voice, or video chat program running. For example, the computer/television may be running a program such as Apple's FaceTime. The display may include multiple chat instances 430, 432, 434, 436 with each window including its own audio (Audio A, Audio B, Audio C, and Audio D) respectively. Additionally, each chat instance may include a corresponding image, such as a video image or a photograph. 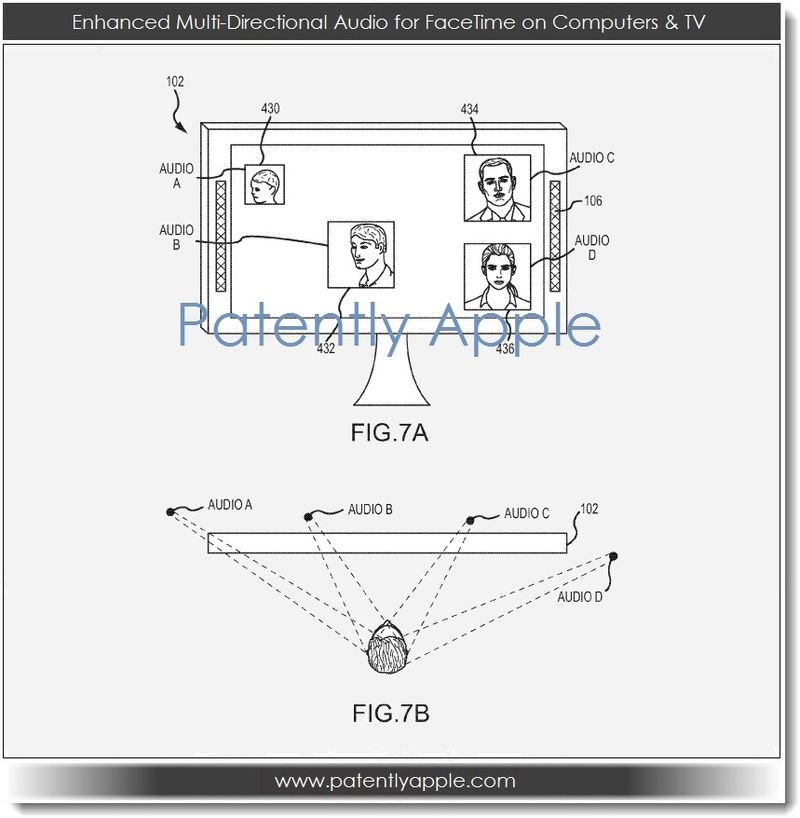 Apple's patent FIG. 7B above illustrates the audio direction for Audios A-D that correspond to chat instances 430, 432, 434, 436 respectively. As can be seen in FIG. 7B, the audio may be directed towards the user in a manner that may correlate to the chat instance location on the display 104. This may allow the user to hear the audio from any of Audios A-D as though they were output from the location of the chat instance. This may provide a more realistic chatting experience of the user in a video conferencing or video chat application. Additionally, the directional audio may also enhance the audio experience of the user during the chat session.

Apple states that the external speakers may form a part of a surround sound speaker array and therefore may provide a better "room" sound experience as compared with the internal computer or television speakers.

Apple states that the image processing unit may utilize gaze tracking to track the gaze of the user's eyes, facial recognition or other similar methods to determine if the user's head direction with respect to the computer or television. Further, if the user has been utilizing the microphone (e.g., for a phone call, video chat, dictation), the computer or television may steer the microphone towards the direction of the user's mouth. Now that's pretty cool.

Apple credits Aleksandar Prance, Brett Bilbrey, Darby Hadley, Martin Johnston and Ronald Isaac as the inventors of this patent application which was originally filed under serial number 193461 in Q3 2011. It should be noted that back in 2006 an Apple invention came to light about tiny cameras being integrated into the very fabric of a future display. This would allow for true eye-to-eye video conferencing. Today's concept working with enhanced audio would provide the ultimate videoconferencing system on the planet and one that could very well be integrated into a future HDTV. Now that would be a killer application that would rock the TV world.