Apple Granted a Patent for an Intriguing Smart Bike System 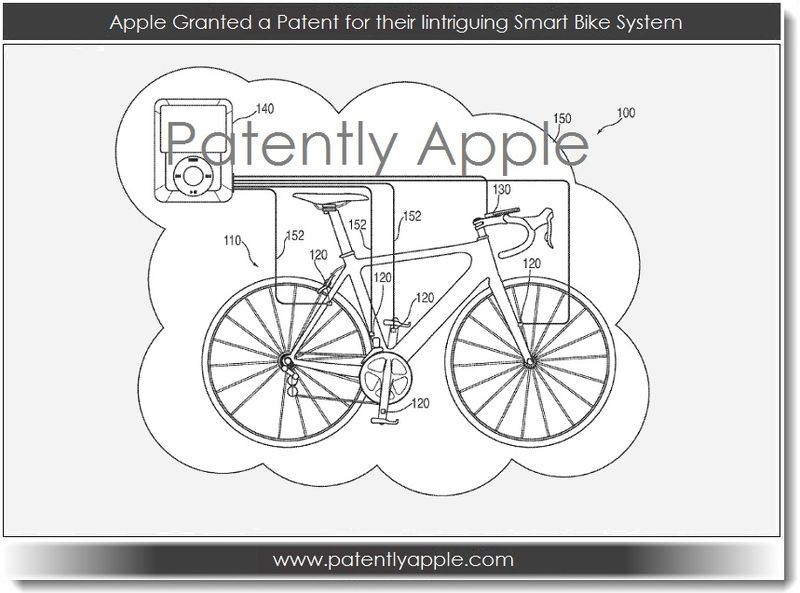 The US Patent and Trademark Office officially published a series of 48 newly granted patents for Apple Inc today. The one that stood out from the pack by far was one that we covered in great detail back in August 2010 titled "Apple introduces us to the Smart Bike." It was the most popular patent report that we ever posted. Apple's granted patent covers various concepts behind an advanced Smart Bicycle System.

The premise of Apple's invention is very much like Apple's Nike + iPod system for runners except for cyclists. While the system is for individuals, it's also designed to work with teams of cyclists so that they could communicate with each other on-the-fly about course difficulty or perceived problems. The Bicycle system will be able to monitor speed, distance, time, altitude, elevation, incline, decline, heart rate, power, derailleur setting, cadence, wind speed, path completed, expected future path, heart rate, power, and pace. The system could utilize various sensors built-into the iPhone in addition to working with sensors already built-into the bike itself. Apple's granted patent is extraordinarily detailed and packed with interesting twists that the sporting cyclist will really appreciate.

This isn't a design patent, so don't get caught up in look of the device or that it looks like an old iPod. In fact, to dispel the idea of it only relating to an old iPod design, Apple's patent describes an alternative display design that could include a movable display or a projecting system for providing a display of content on a surface remote from the bike, such as a video projector, head-up display, or three-dimensional (e.g., holographic) display.

I guess it's safe to say that if this product ever comes to fruition, Apple won't be getting Lance Armstrong to endorse it.