Apple Concepts Brought to Life by Lenovo at CES 2013

In late 2010 we posted a report titled "A New Patent Reveals Scrollable Menus & Toolbars for OS X Lion," which revealed Apple's initial work on bringing Radial Menus to the iMac. Apple was later granted a radial menu patent in August 2012. Earlier in June 2012, another radial based menu patent filing popped up in Korea of all places illustrating that this method could eventually be coming to iOS. Yesterday at CES, Lenovo introduces the IdeaCentre Horizon portable desktop with radial menus that looked cooler than most expected. The Verge posted a few great photos of Lenovo's radial menu that are worth checking out in today's report. 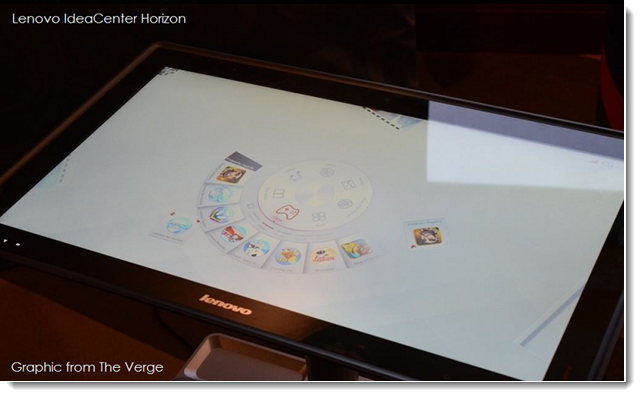 Below is a nice close-up of Lenovo's Radial Menu that they're marketing as the "Moon Dial." It appears to be a great way to access menu features or access apps quickly while working on a large 20 or 27" Multitouch display. Lenovo's desktop display is able to tilt back to a comfortable angle to work with a multitouch display or all the way back so that it sits flat on a table enabling users to play electronic games like Monopoly.

Lenovo's patent on the tiltable desktop display was covered in Patent Bolt's December report titled "Trend 2013: Desktop Computers with Tiltable Touch Displays," well ahead of this week's announcements at CES. 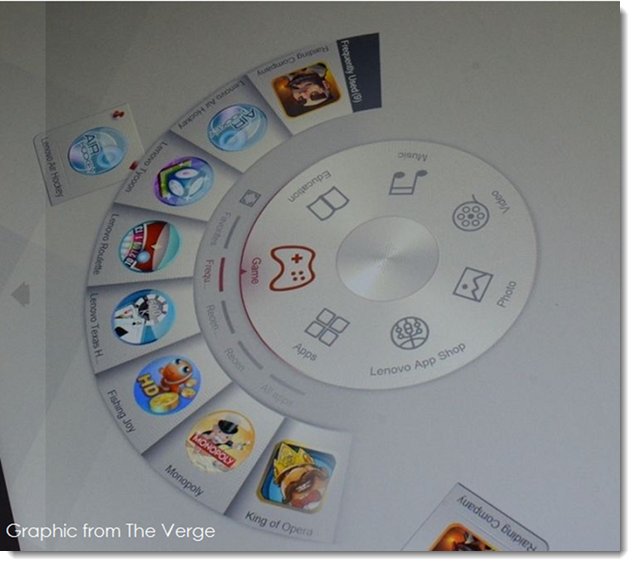 On another note, it should be said that Apple was 30 months ahead of Lenovo on this front with their iMac Touch patent, but unfortunately it's still collecting dust in Tim Cook's attic. This seems to be an ongoing trend at Apple of late. Apple invents something cool with promise and the competition just grabs it and brings it to market faster. It's really a shame but it's just the way it is with Apple. Will we be seeing Apple step up to the plate anytime soon on this front? Time will tell, but I wouldn't hold my breath if I were you.

Wrong. The mouse interface API isn't becoming restricted. It's being expanded. I wish people would think before their write comments more often.

No mouse accepted? Really. That's never going to happen as it's the nature of many apps like Word where you'll always need a mouse for real productivity.

The multi-touch desktop has been around for a while with HP and works just fine. I think that Apple is behind and by the time they have a competing product, no one will give a crap. Apple is behind the curve on this one and unless they jump in this year, they won't be able to claim any revolutionary leap. They lost that window of opportunity.

Apple hasn't made a touchscreen computer yet because every single one of these is absolutely terrible. Apple will have one. You can tell by the way OS X is moving. OS XI will be completely multitouch. No mouse accepted, much less required.

But we're not there yet. When Apple reinvents desktop computing for a third time, everyone will wonder how we got along before it, much less without it. These touchscreen monstrosities will look as archaic to us as the Newton does today.