AAPL Hammered After Hours despite Record Sales of iDevices 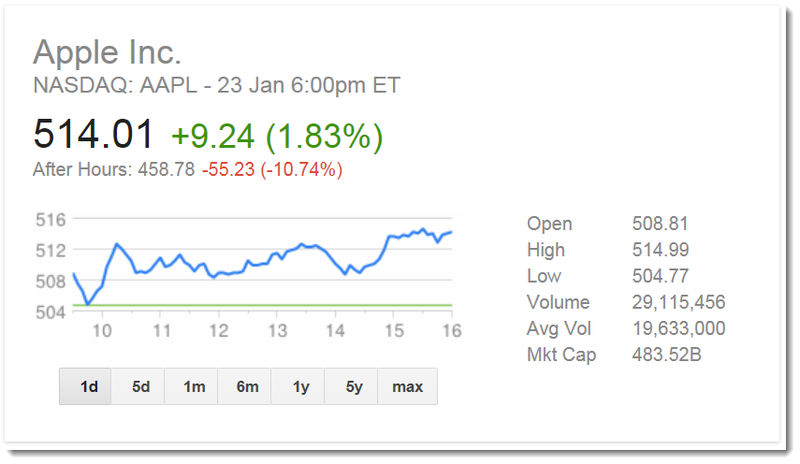 Yet despite record sales in key areas such as the iPhone and iPad, Wall Street has initially hammered Apple's stock after hours. The stock has fallen $55/share to $458, almost an 11% dive. After cooler heads prevail, we may see an adjustment by morning. Apple has provided a PDF of their financials for those wishing to review them in black and white.

As Apple pulls away from using Samsung as their main iPhone and iPad supplier there will understandably be bumps along the road. Wall Street not having any patience in these lean times, use a typical fall back strategy of run for the exits and ask questions later.

As one who has held AAPL stock for many years during the early years of Steve Jobs' return to Apple, I've seen Wall Street react irrationally on countless occasions. It's just the nature of stock markets to over react. They see Gross Margins drop and automatically react, despite the fact that Apple likely had to pay extra overtime due to switching suppliers and having a few glitches getting their new displays suppliers up to speed. These are all justifiable reasons  for a slight drop in Gross Margins.

Various reports over the last month have clearly indicated that Apple is still playing catch up with iPad mini and iPhone 5 demand, will be tripling their retail footprint in China and are likely to announce a deal with China Mobile later this year. Despite Apple having juggled ongoing production bumps, they were still able to pull off record sales. So regardless of the noise on Wall Street, Apple had a great quarter and there's excellent growth potenial on the horizon.

I agree 110%. There's no sanity here. Did you listen to the MSFT earnings call? - miserable. Klein refused to say how many Surface RTs they sold, or forecast how many Surface Pros they expect to sell. They're "ramping up production and taking the RT into 14 new markets?" And no analyst drills down on THAT?

Meanwhile, the CNBC gang trips all over itself trying to put lipstick on the single-digit growth pig. $596 million revenue in the Entertainment and Devices (Xbox, Surface and games)? - are you kidding me? And a half billion more loss in corporate?

Apple will come back. You can't lose money unless you sell, if you bought a year or 2 ago.

Well said. There's a lot of growth potential ahead.