A Company by the name of Digitech Image Technologies based out of Newport Beach California has filed a patent infringement lawsuit against Apple. While the formal complaint relating to this case has yet to be made public, Patently Apple has discovered that Digitech has filed similar lawsuits in the past two months against Sony, Toshiba, Motorola, Asus Computer and others with the same common patent. What makes this case noteworthy is that the Digitech is wielding a powerful patent from Polaroid, who beat Kodak in court in 1986 regarding the "instant camera." 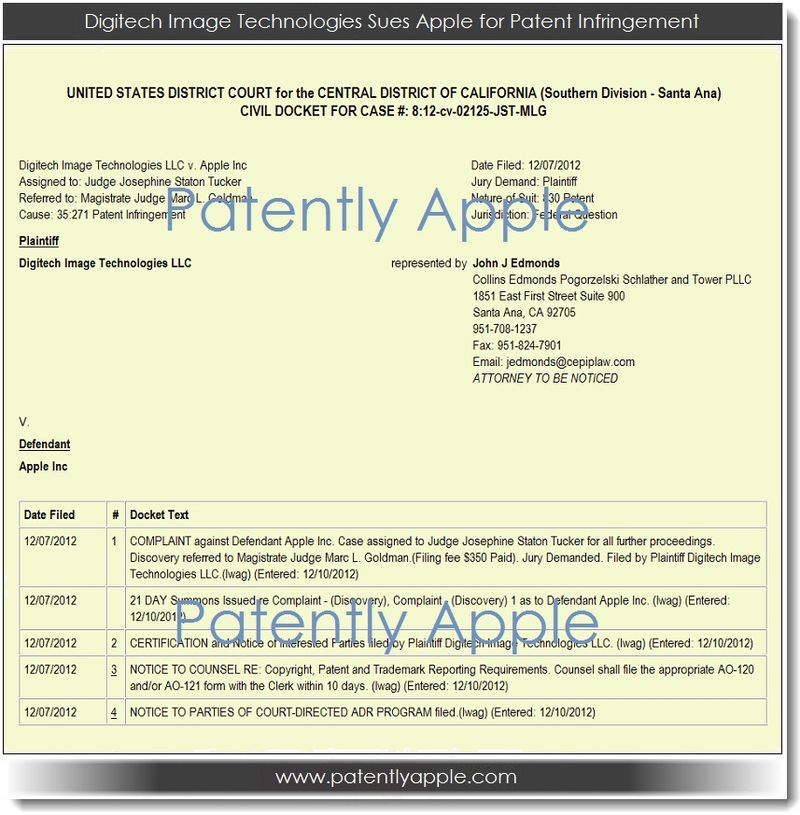 Digitech Image Technologies has filed individual patent infringement lawsuits against several technology companies in the past 30 days including Apple using the common patent 6,128,415 from Polaroid.

The trend found in the other cases recently filed would indicate that their lawsuit against Apple will be similar. The lawsuit is likely to be against all of Apple's iDevices that use backside HD cameras such as the iPhone and iPad. When the official complaint is made public we'll update this report if and ony if there's actually something surprisingly new to add.

Below is a screenshot of the patent abstract that is found in Polaroid's patent. 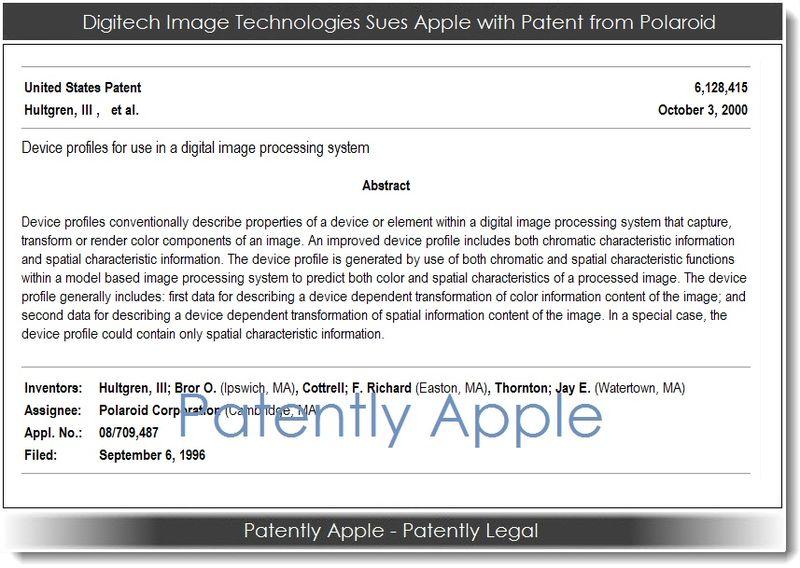 A report published by Reuters just yesterday cited a new study by Colleen Chien, a law professor at Santa Clara University which claimed that roughly 61 percent of all patent lawsuits filed through Dec. 1 were brought by patent trolls or "patent-assertion entities," or individuals and companies that work aggressively and opportunistically to assert patents as a business model rather than build their own technology. That compares with 45 percent in 2011 and 23 percent five years ago.

The report added that many in Silicon Valley deride patent-assertion entities as "patent trolls." Patent litigants who do not make products or develop technology think of themselves in a better light. Many of them represent inventors, sometimes university researchers, who often cannot afford to defend patents on their own and many patent holders sue based on contingency, meaning they pay only if they win an award.

In this case against Apple it's difficult to discern which role Digitech is playing being that the formal complaint has yet to be made public. Will they be proven to be nothing more than a classic patent troll or will they be shown to be an IP defender? At the moment that's unclear. Yet if the similar infringement case against Sony is any indicator, then it should be noted that Digitech's formal complaint stated in that case that "Digitech is the present assignee of the entire right, title and interest in and to the '415 patent, including all rights to sue for past and present infringement and to recover for infringement of the '415 patent."

If I'm reading that correctly, it would be safe to state that Digitech will be in classic patent troll mode in Apple's case. If you disagree, send in your comments below.

The case was filed in the United States California Central District Court, Southern Division in Santa Ana. The presiding Judge in this case is noted as being Judge Marc L. Goldman. The case that came to light today was originally filed on December 7, 2012.

I think they'll have a hard time winning when Colorsync was invented in 1988.

Everyone on the planet knows that Samsung copied Apple's iPhone. Even Samsung knows it. Apple did the moral thing in protecting it's IP. For every patent that's been rejected, Apple could replace it with five others.

Ridiculous, you say? Only a Samsung fan could even think that way. Samsung sues companies all of the time to protect their IP. They're now in deep litigation regarding OLED technology with LG. Who are you kidding?

But hey, thanks for the laugh Jasyn. I really appreciate your sense of humor.

Apple is just as guilty of frivolous patent lawsuits as any patent troll... Just because it makes products does not mean that any lawsuit it initiates is moral. Two of its favorite, most asserted patents in the U.S. have a preliminary ruling of being invalid (multi-touch and rubber banding). Even many Apple fans are beginning to see Apple's actions as childish, immoral, and ridiculous.