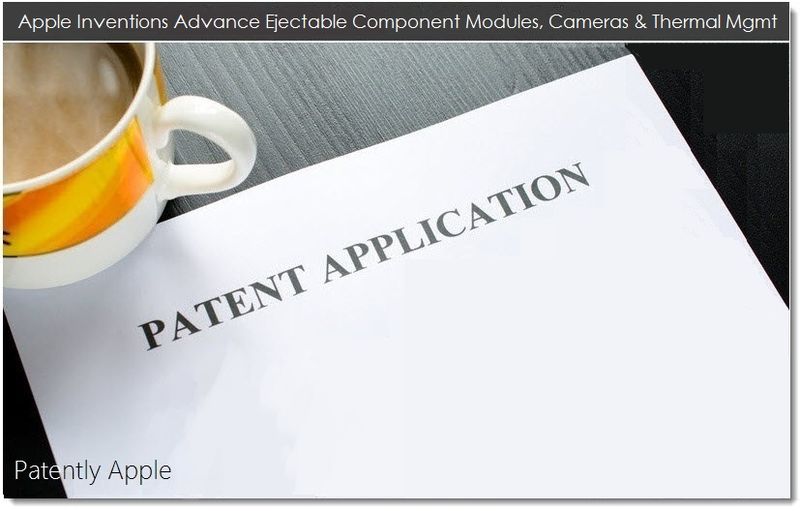 On December 6, 2012, the US Patent & Trademark Office published well over seventy-five patent applications from Apple. The vast majority of these filings were about boring everyday necessities to keep products humming along like video codecs, security sandboxing, backup and restore functionality, Flash Memory techniques and stuff to keep the iPhone advancing, such as integrating Orthogonal Frequency Division Multiplexing (ODFM) technologies, and more. Yet within this mountain of new patent filings we were able to find a number interesting advancements to standing projects worth noting. In this particular report we specifically focus on three areas of technology. The first relates to ejectable component modules for e-commerce, the second relates to iDevice thermal management technologies and the third relates to all things photography.

We first covered Apple's work on this particular project back in January 2011 in our report titled "Apple Reveals possible iWallet Implementation in Portables." Back then it became clear very quickly that Apple had their eye on expanding the use of their ejectable component assembly. The former and current patent filings point to other future applications beyond SIM cards for their ejectable component assembly. Some of the options noted in the filings included memory cards or a tiny SD card.

Yet the real eye opener back in 2011 was that Apple's researching teams were looking at some very sophisticated applications for this ejectable component assembly that could include integrating things like a microprocessor or integrated circuit cards. The latter could translate into how the iWallet component could come into play in devices such as the iPhone, iPod touch, iPad and other future miniature devices. You'll simply be able to pop your mini-credit card chip into one of these protected ejectable assemblies just like you do today with a SIM card. 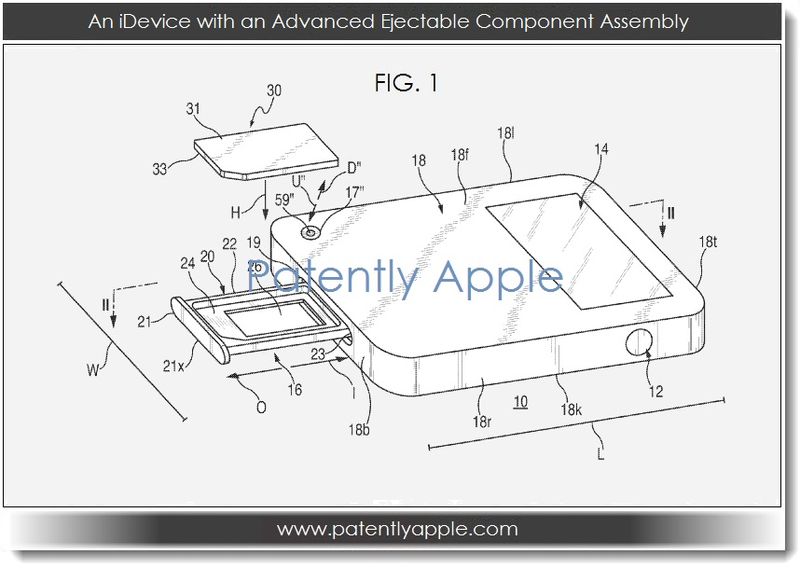 Today, Integrated Circuit Cards (ICCs) are embedded into up-to-date credit cards. If you brush your finger over the circuit on one of your credit card, you could easily tell that it's been embedded and it's this kind of ICC that could be set into a SIM-Like card to fit into future ejectable component assemblies that Apple describes in this patent.

Today's patent FIG. 1 is a little different than the one that we saw in 2011. It's a perspective view of an illustrative electronic device that could include an ejectable component assembly. For more on this invention, see patent application 20120307451.

Back in December 2011, we posted a report titled "Apple shows us Just How Cool Future iOS Devices Could Be." Apple's patent filing revealed their work on cooling down the exterior of their entire mobile device lineup from iPad to MacBook. Metal exteriors obviously get hotter than other substrates and Apple's invention described the creation of "monitoring thermal zones" within each device that could drop the internal temperature as required to keep the exterior cool to the touch. This is also important because heat affects the accuracy of the gyroscope found in all iOS devices. On that point, Apple is shown to have reengineered their gyro so that it'll run cooler in the future. 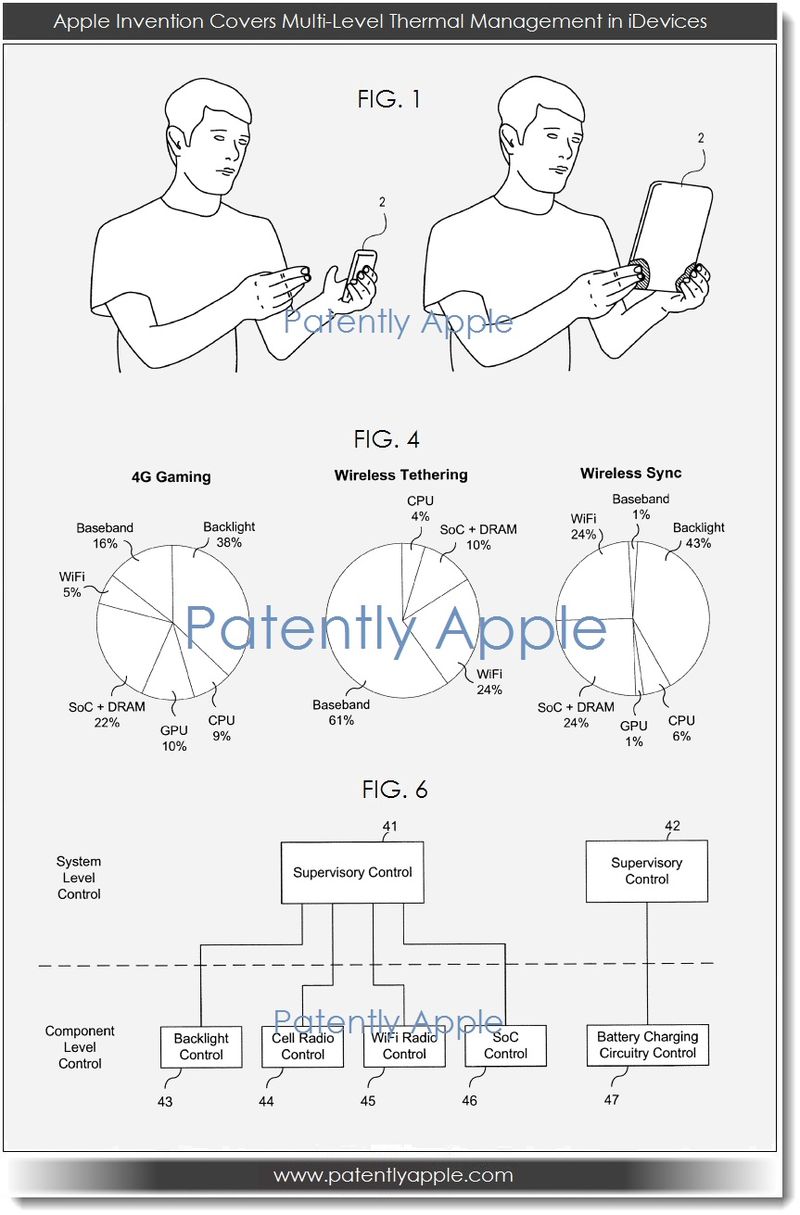 As Apple's A-line of Processors get faster and advance to quad-core configurations for both CPUs and GPUs, advanced thermal management technologies and techniques that Apple presents in their patent filing will be a must. For more on this invention, see patent application 20120311357.

The ability of a camera to produce a photograph that faithfully depicts a scene is governed in large part by its optical performance. There are several technical variables that can be used to evaluate optical performance based on the quality of the photograph or picture. For instance, there are systems that can measure the sharpness of the photograph. Sharpness is also monitored during an autofocus process in which sharpness values are calculated over a number of image captures, as the distance between a camera lens and the plane of an image sensor is changed or "swept". This may be referred to as sharpness sweep data. The autofocus process attempts to find the optimum location of the lens (e.g., its distance to the sensor) that yields the sharpest captured image. The actual sharpness capability of a camera typically varies in different parts of the image sensor array, due to the imperfect physical characteristics of the lens.

Apple states that the noted technology relating to "sharpness sweep data" is found in most professional digital SLR cameras. In order bring this to iDevice cameras, Apple had to reengineer the technology. The lenses used in iDevices are relatively small and the resulting photographs are more susceptible to variations in optical characteristics. Apple's latest patent application details how they'll be bringing the "sharpness sweep data" process to iSight cameras. 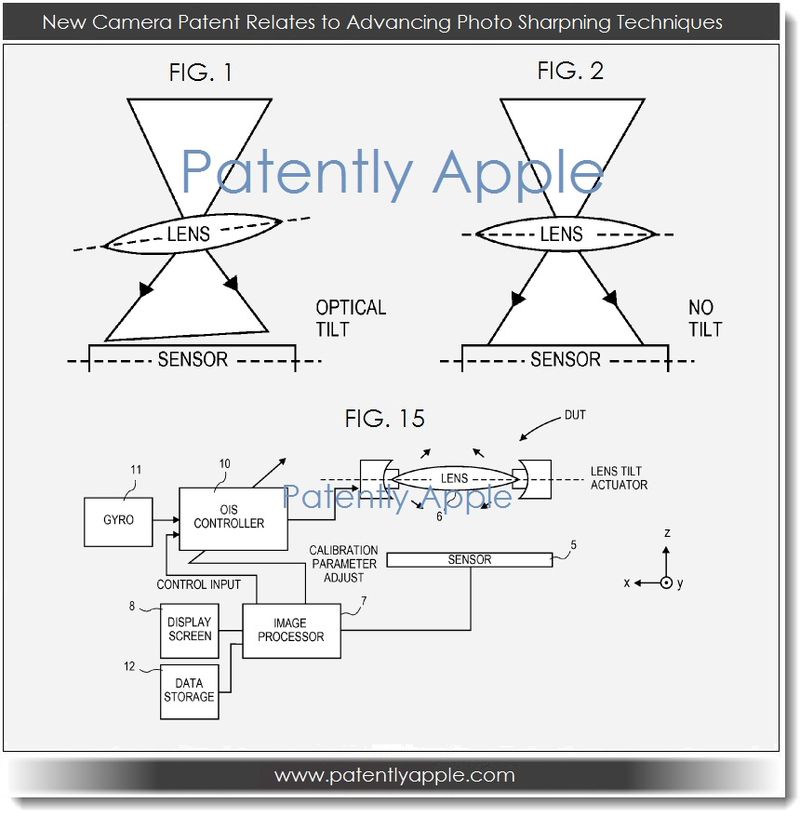 Apple's patent FIG. 1 noted above depicts an optical system with tilt, while FIG. 2 depicts the optical system without any tilt; In Patent FIG. 15 we see a block diagram of a camera having an Optical Image Stabilization (OIS) mechanism that controls the optical tilt between the lens and the image sensor. For more on this invention, see patent application 20120307089.

The one thing we could count on from Apple like clockwork is that when the next iteration of the iPhone or iPad rolls around, we're likely to hear Phil Schiller describing yet another new camera advancement of one sort or another.

Today, a new series of patent filings from Apple came to light that went far beyond just advancing photo sharpness. For real camera buffs that like to use their iDevices for taking photos, we present you with the links to Apple's five other camera inventions that were published today by the US Patent Office:

At the end of the day, it's great to see that Apple is continuing to work on several key projects that have excellent potential of coming to market over time in a wide variety of areas including e-commerce, thermal management and photography.