Fears of losing your iPhone may only accelerate with iWallet 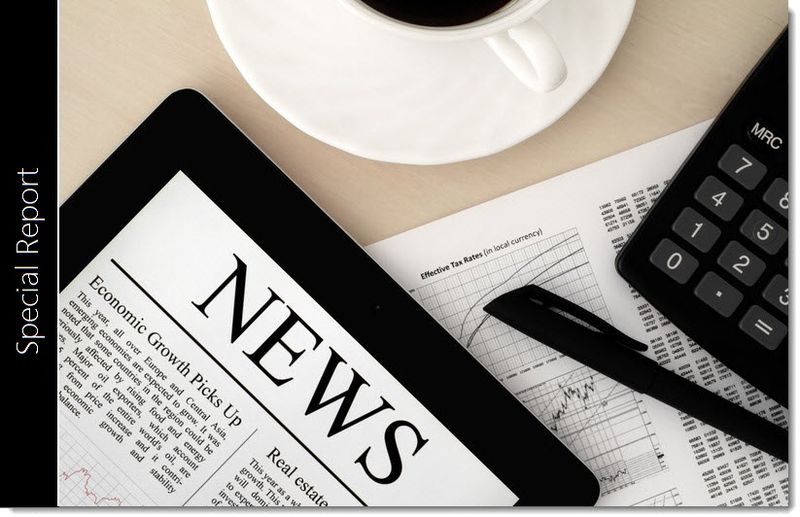 I was reading a few reports recently about how iDevices have changed or is changing our behaviour as a society. While the reports weren't exclusive to iDevices like Apple's iPhone, the findings would generally apply to them. One 2012 survey stated that 66 percent of smartphone users suffered from nomophobia, the fear of being without your mobile phone. Some of the findings in the research were very interesting and you just might find after reviewing them that you're indeed addicted to your iPhone in ways that you really never realized before. But more importantly, the data shows us that the tech industry just may have to approach the new electronic wallet differently than they have if they want it to be widely accepted by the public.

Can you go an Hour without checking your iPhone?

According to the study, 58 percent of Americans on average stated that they typically couldn't go an hour without checking their smartphones. Unsurprisingly, this hourly phone-checking fixation was significantly greater in the 18-34 demographic at a whopping 68 percent.

The data confirms what you have probably noticed in restaurants, parks, on the bus and in any other public setting: habitual phone-checking is widespread with more than half the smartphone-owning population checking their phone at least once an hour. I don't know about you, but I'm constantly seeing people reading email or texting while walking blindly across streets and news in my city had at least two people in the last year being killed by vehicles hitting individuals with their MP3 players on while texting crossing the street. It's crazy. A new law was put on the books in New Jersey earlier this year and more cities are considering such bans.

Other Highlights from the Harris Interactive Study

Other highlights from the Harris Interactive Study found that 30% admit to checking phones during a meal; 24% still check for messages while driving and 9% even check out their phones during a sermon. And the stats got crazier when it came to the fear of losing a smartphone. The survey stated that 94% of smartphone users fear losing their phones while 73% admitted to experiencing shear panic when they temporarily lost their phones. 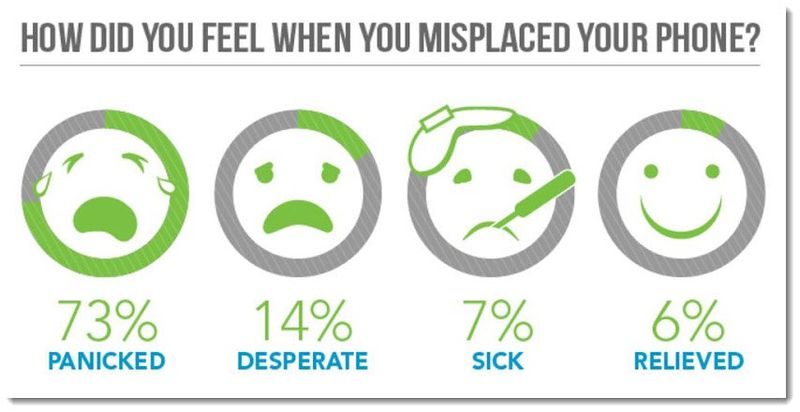 It's a universal truth – you don't know what you've got until it's gone. As part of the survey's effort to understand our attachment to smartphones, they asked respondents about their biggest concern when it comes to losing their phone.

As noted earlier, 94% of participants surveyed expressed concern about losing their phones. While that stat wasn't all that surprising, the reasons and priorities behind these concerns were – as you could see below in our graphic. 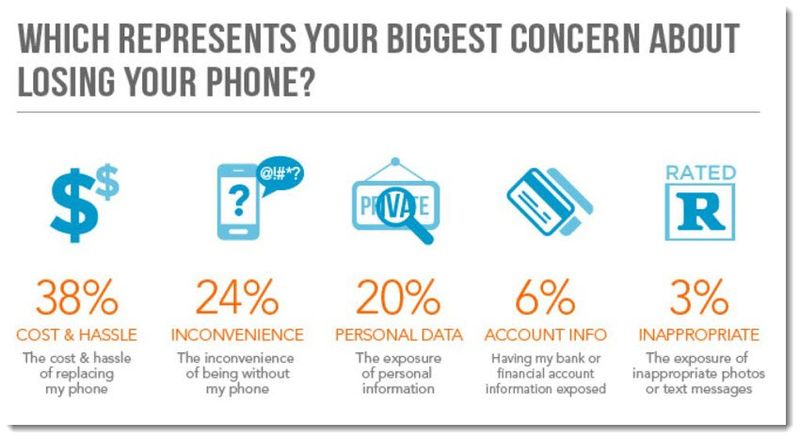 The reports stated that a recent Federal Reserve study revealed that 21 percent of smartphone users are already using mobile banking; as such, the researchers expected to see a much higher percent of users' state that their financial data was driving their fears of phone loss, or their "nomophobia," the fear of being without a phone.

Similarly, 26 percent of American smartphone owners told the researchers that they had used their phones to take and/or receive explicit photos, and 18 percent confessed to sexting. So why, we wondered, do so few cite the exposure of such photos and messages as their top phone loss fear factor?

The researchers suspected that smartphone users out there banking, sexting and explicit picture-taking are, in fact, concerned about their financials and unmentionables being revealed, but our data reveals that they are more concerned with the time they would have to spend without their device and the money it would cost to get it back.

Given respondents' confessions about habitual phone-checking, it appears misplacing a phone would be like going cold turkey – and, that fear trumps the embarrassment and financial fraud potential a lost phone could create.

The data in the survey could also provides us with a tiny glimpse into why electronic wallets are so slow to come to market. There appears to be a real resistance to tying an iWallet to an iDevice such as a smartphone in particular. It could just be that tech device leaders like Apple, Microsoft and Google are going to have to educate their fan bases about the use, safety and benefits of using a future iWallet or seriously re-think their approach to this coming market altogether. Perhaps there should be a separate iWallet device that's not associated with our smartphones. Perhaps having your whole life being on one device isn't the way to go after all.

I think that many don't believe that society is ready for electronic wallets because they know that cybercrime is so out of control. A new report published this week by ABI research only amplifies those fears. The report is titled "Aggressive Cyber Threats Expose Vulnerable Financial Infrastructure and Prompt $17.4 Billion in Security Spending," and truly confirms our fears of wanting to adopt an electronic wallet associated with our smartphones.

ABI's report states that "Exploit kits, banking Trojans, and botnets are used in combination with social engineering tactics in persistent and highly evolved attacks. These tools are being eagerly picked up by an even more threatening group – nation states. Warring states will undoubtedly start to use these tools as cyber weapons to bring down enemy economies."

A senior cyber security analyst was cited in the report states that "Banks and other financial institutions are always a step behind, despite deploying some of the most advanced cyber security solutions available on the market." How comforting is that news?

At the end of the day, the reports were entertaining in respect to how smart devices like our smartphones are changing our behaviour as a whole. But the underlying fears behind losing our smartphones is the most telling. The mere thought that smartphones are about to enter the electronic wallet phase is bound to be met with more resistance. If many users are already experiencing signs of nomophobia, it's only going to be exaggerated when the iWallet arrives.

In the end, are you as addicted to your iPhone as the survey claims and more importantly, will the inclusion of a future iWallet application be something you welcome or fear on a future iPhone? Should Apple be slow to adopt this feature or should there be a completely separate iWallet device so that you don't lose all of your personal information in one shot if you lose your iPhone? Join in the conversation by sending in your comments and feedback below.

If you are going to create a separate device that needs to be in close proximity to your phone then why not just keep using your actual wallet with credit cards and cash that works perfectly fine right now?

As a product designer one of the most obvious questions I always ask when considering a new product idea is "what benefit would anybody actually get from using this?" I have a hard time finding much here. My hunch is that some company will indeed create such a separate wallet device, it'll get some buzz, some people who really like buying the the latest gizmo will buy them and be excited to show their friends how cool it is that they can just reach into their pocket at Starbucks, pull out their nifty gadget and pay for their Macchiatto! And then said friend will reach into their own pocket, pull out their wallet and do the same just as easily without having to worry about it crashing, running low on battery life, or being in close proximity to their phone which they just left in the center console of their car.

Should be a separate device using NFC to only allow the new device to work while in close proximity to the phone.