On November 8, 2012, the US Patent & Trademark Office published two security related patent applications from Apple. One reveals the secrets behind the security cables found attached to all devices at every Apple Store on the planet. The second security patent provides us with a serious look at a new adaptive security system for iDevices that will work easily for the regular home user while being able to be ramped right up to a multi-tiered high security level that could utilize retinal scans and other forms of biometrics that would be ideal for the savvy enterprise user.

Portable electronic devices have become ubiquitous and continue to evolve to have an ever-expanding range of capabilities. It is not uncommon for a single device to perform multiple functions, including playing music, displaying video, storing pictures, sending and receiving email, receiving and transmitting phone calls, etc. Because of the portability of modern electronic devices, users often carry them wherever they go.

The increased convenience brought about by these devices is not without attendant perils. One potential downside, for example, is that unauthorized access to an electronic device may pose a dangerous security risk for a user. Users often have access to personal information (e.g., bank accounts, contact lists, and email) and confidential data (e.g., work related information) through their electronic devices that can be compromised in the event that the device is lost or stolen. One solution may be to provide password protection for each interaction between a user and his or her device, though frequent authentication may become onerous. Accordingly, what is needed are systems and methods for supporting various adaptive security profiles on an electronic device.

Apple's iDevices May Support Adaptive Security Profiles in the Future 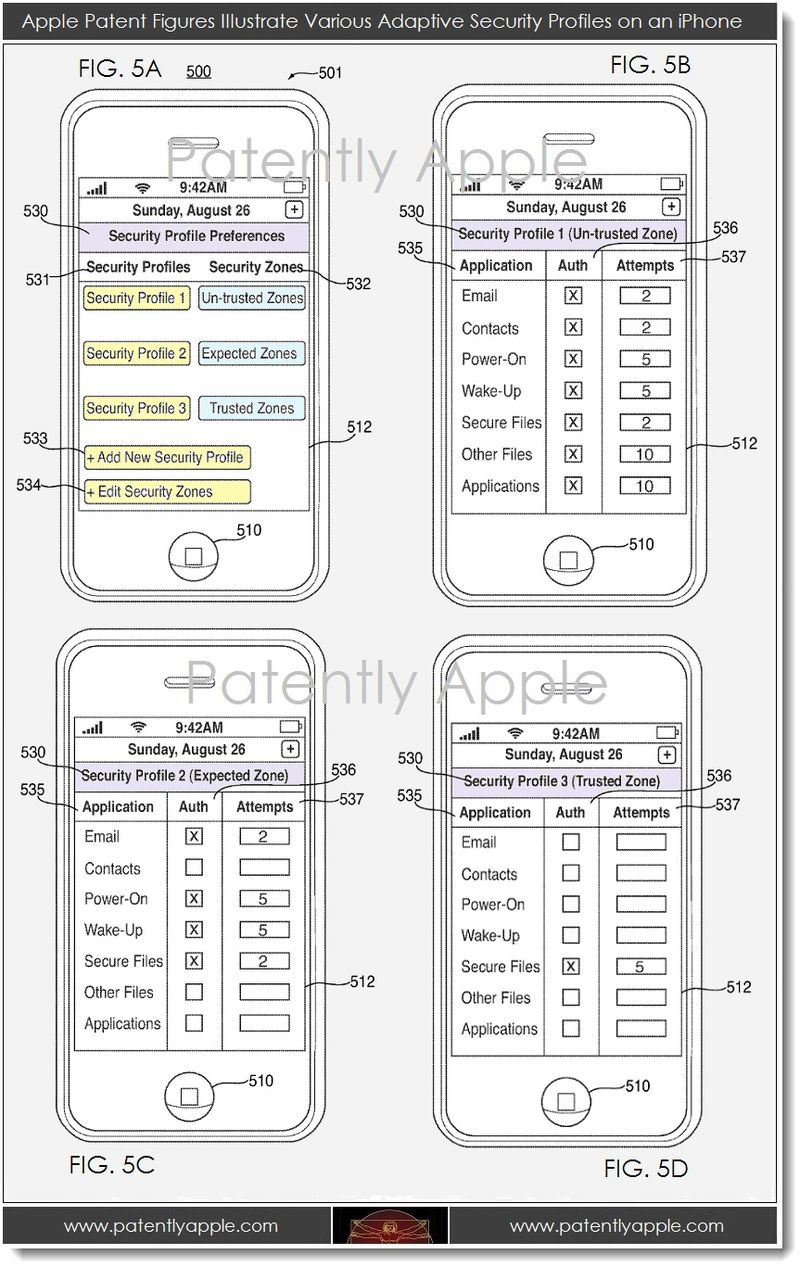 Apple's patent FIGS. 5A through to 5D are various illustrative screen shots of an iPhone using adaptive security profiles.

In Apple's patent FIG. 5B we see an exemplary Security Profile 1 which could include a table with at least three columns: an Application column, an Authentication ("Auth") column (536), and an Attempts column (537). Each row of the table may generally represent a single set of security preferences for a feature, application, or group of applications. Any suitable method for authenticating a user may be implemented for each feature or application, including, but not limited to, one or more passcodes, pin numbers, or biometric indicators, such as fingerprint scans, voice recognition, retinal scans, etc.

In Apple's patent FIG. 5C we see a schematic view of an iPhone with an exemplary Security Profile 2 interface which could be generally referred to as a "medium security" profile. For example, Security Profile 2 only requires authentication for Power-On, Wake-Up, and access to the user's Email and secure files. The permissible number of invalid authentication attempts in column 537 may also be increased. Security Profile 2 may be useful, for example, when a user could be fairly confident that the device is not being used by an unauthorized person. In that case, access to non-confidential files, applications, and contacts may be given freely without the user having to provide frequent or more stringent authentication. For example, if a passcode and retinal scan is required for access to secure files in a high security profile, a medium security profile may only require a passcode. A medium security profile like Security Profile 2 may be appropriate when the device is in an expected zone.

Apple's '779 patent application was originally filed under serial number 100851 by inventors Michael Ingrassia and Jeffery Lee in May 2011. The application was published today by the US Patent and Trademark Office. If you've ever been to Apple Store then you know full well that the devices laid out on their classy wooden tables are all tethered by a security cable. This is the patent that's behind that security feature. If you wish to study it further in detail, you could check out patent application 20120279780.