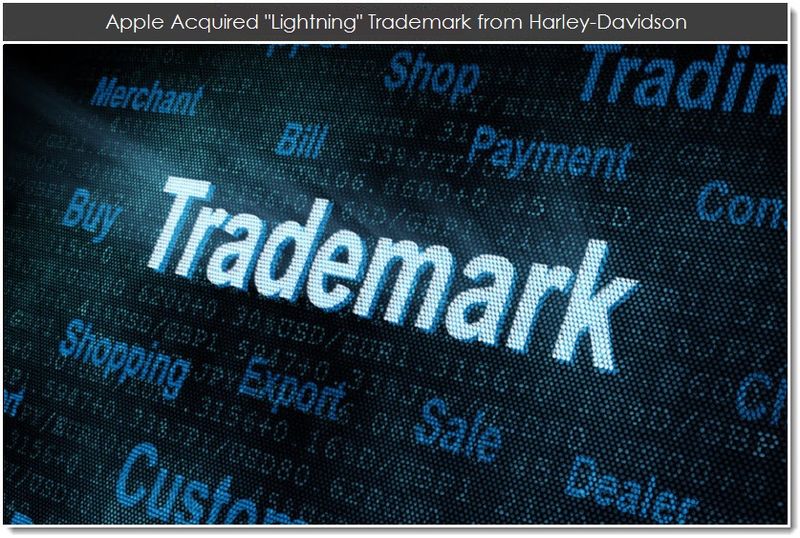 The EU Patent & Trademark Office officially published two Apple trademark applications for "Lightning" under numbers 011399821/862. What's interesting about this filing is that it clearly illustrates that Apple had acquired the trademark from Harley-Davidson which is still protected until 2013. One of the documents indicate that the transfer may have officially occurred yesterday, November 24, 2012, the date that it appeared in the EU's public trademark database.

Apple's European filings for the "Lightning" trademark presented below reveal a rather interesting twist. As noted below in box # 1, we see that there's a certified registration certificate assigned to the trademark and it's dated back to 2005 from an original filing in 2003. Under "Owner" you clearly see Apple Inc. In the graphic below owner you'll see box # 2 pointing to a "History of Statuses" link. The link leads to our box # 3 graphic representing a transfer of the trademark. 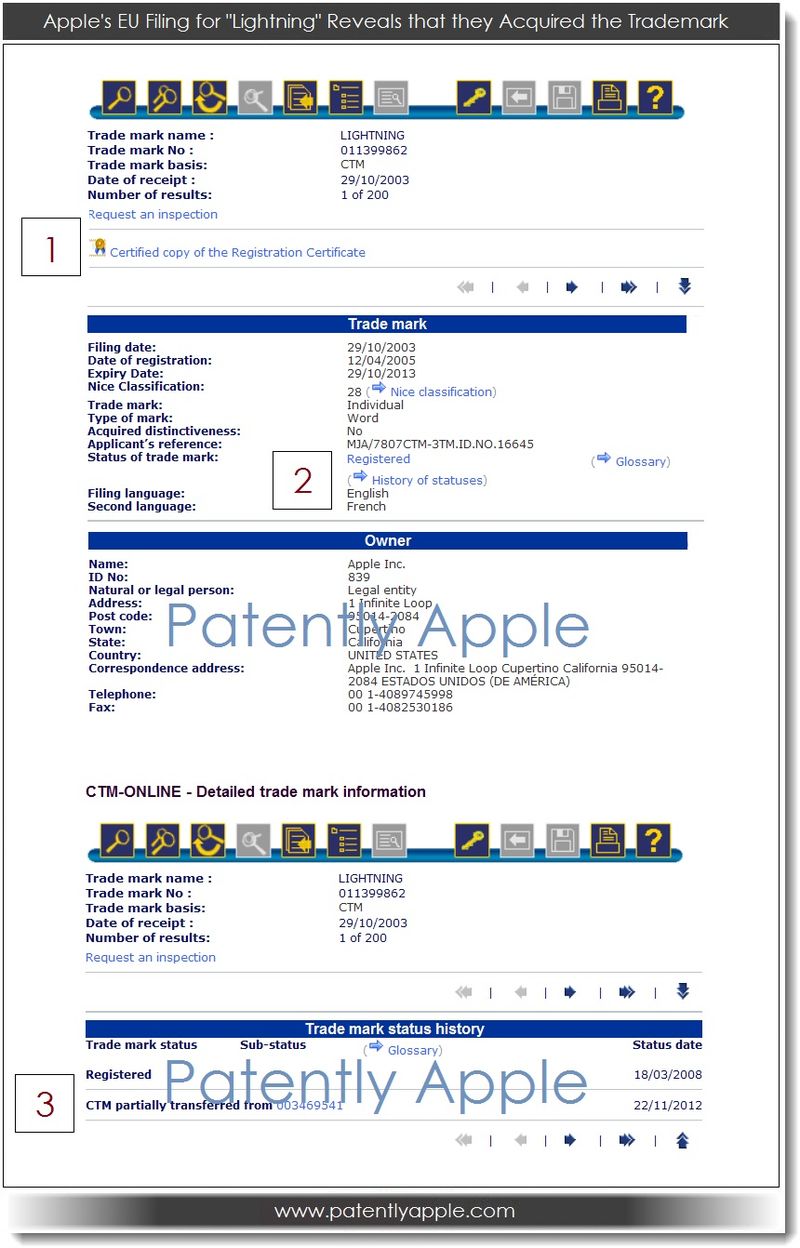 The EU Certificate of Registration noted on the original filing presented above is shown below. The second half of the graphic shows that the registered trademark was owned by H-D Michigan, Inc. 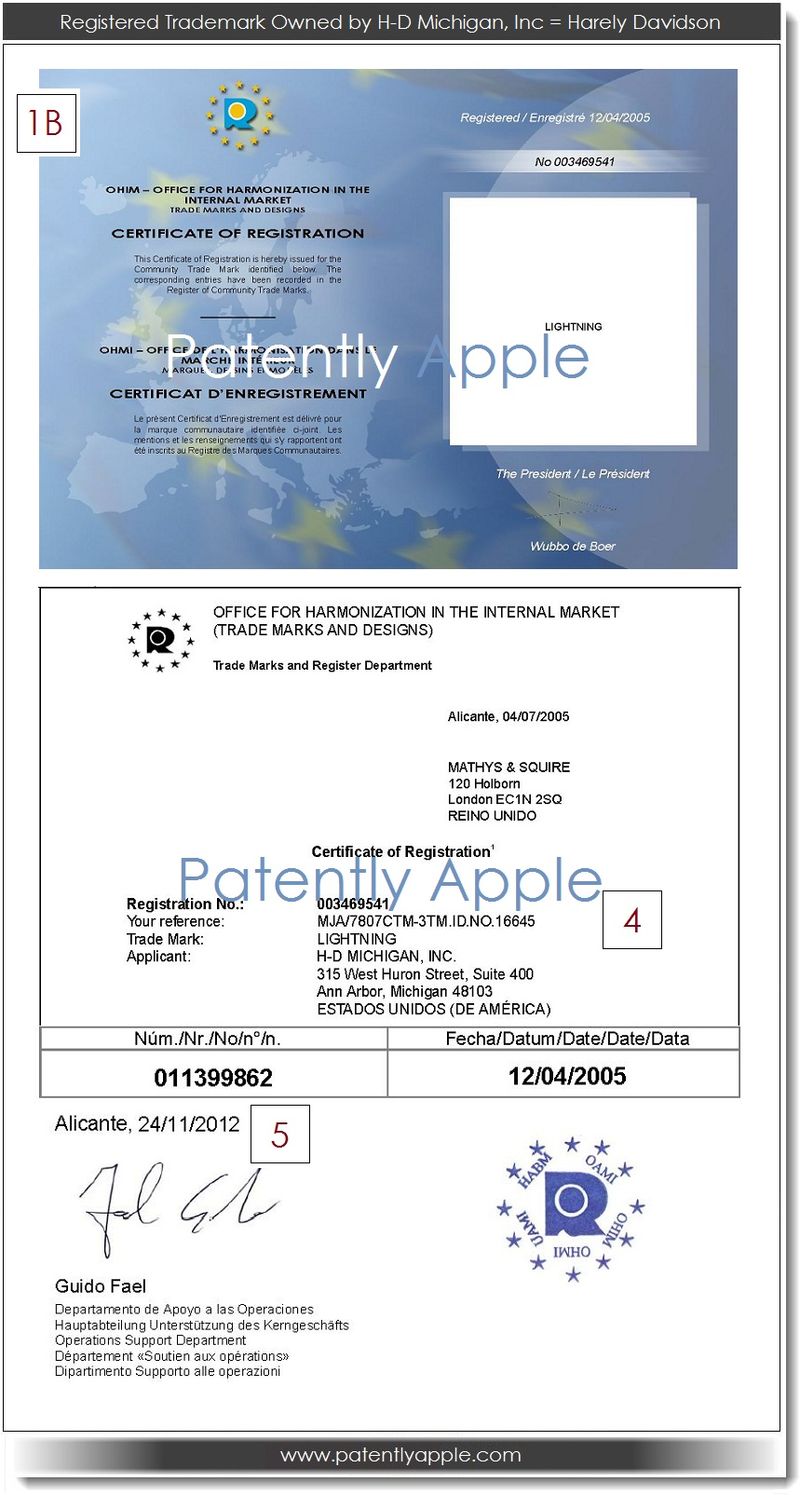 In the graphic below we present you with a partial webpage that illustrates that H-D Michigan, Inc. in Ann Arbor, Michigan is the headquarters of Harley-Davidson's Intellectual Property Holding Company who owned the Lightning trademark. 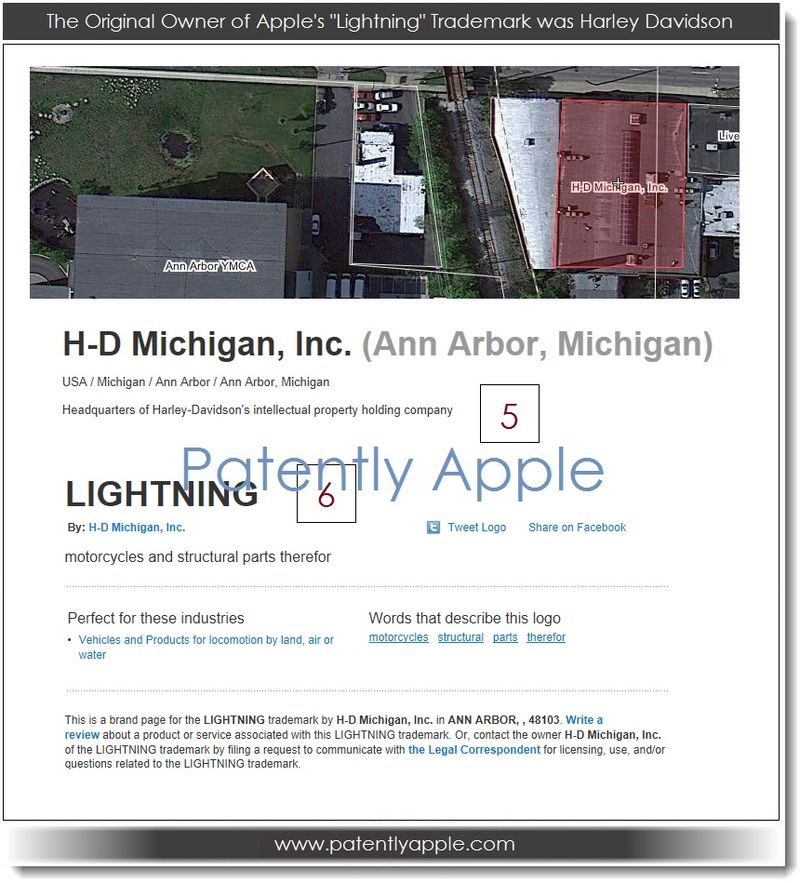 At first glance I thought that the transfer of the trademark from Harley-Davidson to Apple illustrated Harley's original International Classes of 009 and 028, especially because it covers items such as motorcycle electrical parts, protective helmet and turn signals. However, it goes on to protect television sets, games, computer game programs, eye glasses and eyeglass frames; things that would have nothing to do with Harley-Davidson.

The explanation for this clash of covered items under Class 028 likely relates to what we pointed out in area # 3 noted above. There it states that there was a "partial transfer." Meaning that Harley-Davidson may have retained the ability to use certain aspects of the trademark relating to the motorcyle parts and so on. The specifics of the partial transfer weren't revealed.

Under Class 28, UPSTO points out that that "This Class includes, in particular: amusement and game apparatus adapted for use with an external display screen or monitor." That's where the television set comes into play. The "eye glasses" angle is interesting as well as we just posted a report yesterday questioning whether or not Apple was gearing up for the coming Glass Projects market. A few Apple patents over the years have pointed to a game console/controller and video glasses, so both of these entries amongst others are of high interest.

Whether any of these class entries (that go beyond what the trademark's original boiler plate verbiage actually states), actually mean anything is unknown at this time.

Looks like Apple didn't want a repeat of The Beatles.

Thanks for the input Paul. I'd also like to thank Bla1ze and Race951y for similar comments that they sent me.

"...protect.., games, computer game programs, eye glasses and eyeglass frames; things that would have nothing to do with Harley-Davidson."

H-D bikes are only a part of the business. The front of an H-D dealership is a fashion-shop. You could always buy a jacket, but since the 1980 they've pushed boots, scarves, T-shirts and tanktops, sunglasses, handbags and thongs for the H-D rider's back-perch person. An H-D owner only buys a new bike every few years, but is in the store several times a year for service, socializing, or to see new models.

Apple's intended use does not conflict with H-D's uses.

Good point on that forgot about the Buell brand