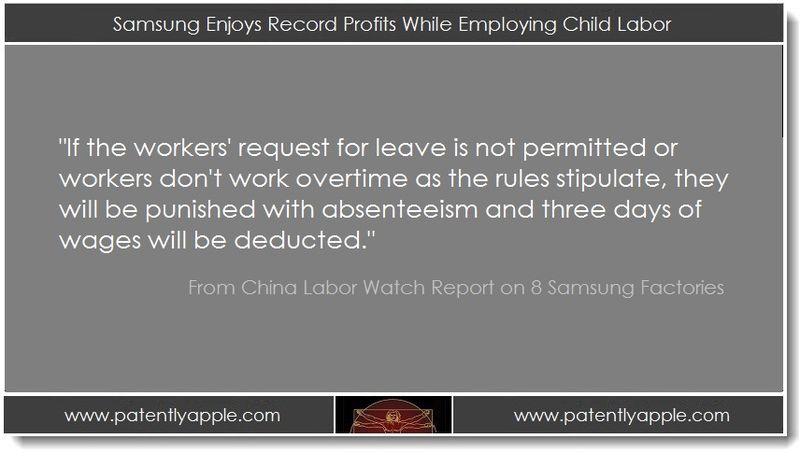 While Bloomberg was reporting on Friday that Samsung had reported a record operating profit jumping to 91 percent, I was reading a scathing report titled "Samsung Factory Exploiting Child Labor," which made me wonder: did Samsung's huge leap in profits come off the backs of child laborers? Members of China Labor Watch (CWL) who were responsible for the report stated that they "were stunned by the results of the investigation of HEG Electronics, which showed that the practice of hiring child labor is prevalent in this factory." HEG Electronics is an important partner of South Korea's Samsung, processing such products as mobile phones, DVDs, stereo equipment and MP3s for Samsung.

The China Labor Watch report revealed that their investigators worked in the factory during the months of June and July 2012, and had identified seven children working—all of them are under the age of 16—in the department in which the investigators were working. This suggests that child labor is a common practice in the factory. The precise number of child laborers throughout the factory is unknown because our investigators had limited contact with workers in other departments. But the company has clearly violated Chinese labor laws. 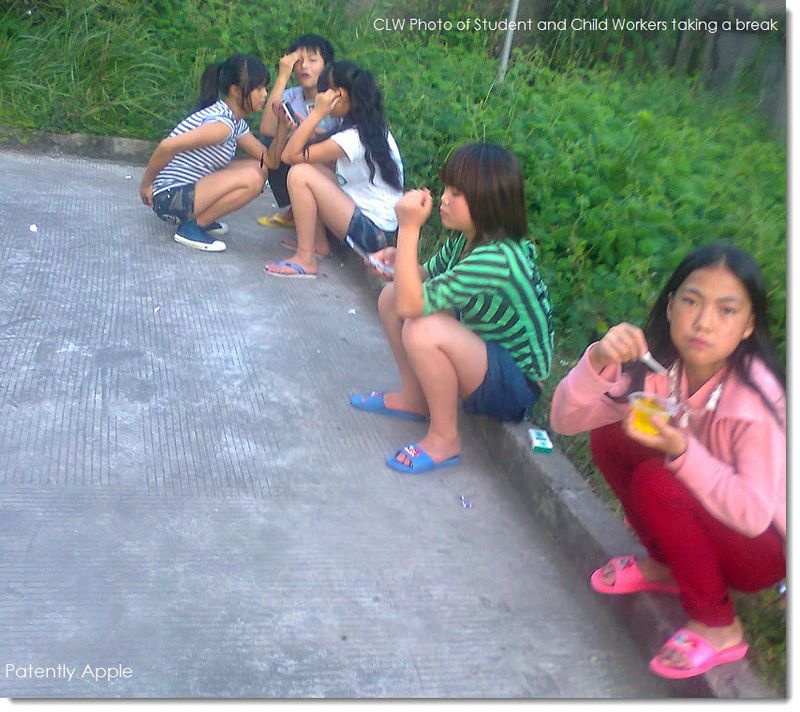 The report went on to state that CLW's research indicated that student laborers amount to 80% of the total workforce in the factory. During their follow up investigations, their investigators suspected that there were a large number of child laborers in other departments of the factory, estimating that there may be 50 to 100 children working there. These children were working under the same harsh conditions as adult workers, but were paid only 70% of the wages when compared with the formal employees. Moreover, these child workers were often required to carry-out dangerous tasks that resulted in injury. 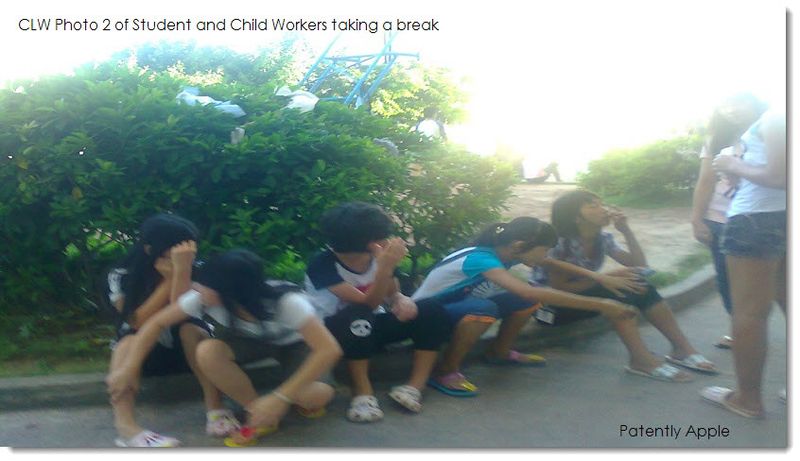 Before the customers place orders with the factory, they often require social responsibility audits of the company. According to its website, Intertek was the auditor of Samsung— one of the major clients of HEG Electronics (Huizhou) Co., Ltd. Intertek is an international auditing firm; it claims to be a reliable auditing company. However, China Labor Watch's previous investigation showed that reports created by Intertek weren't trustworthy. Their investigation showed that some of Intertek's auditors have accepted bribery from factories in exchange for letting the firm pass audits despite not meeting requirements. One of Intertek's previous audit result was annulled by the clients.

Founded in 2000, China Labor Watch is an independent not-for-profit organization. In the past ten years, CLW has collaborated with unions, labor organizations and the media to conduct a series of in-depth assessments of factories in China that produce toys, bikes, shoes, furniture, clothing, and electronics for some of the largest U.S. companies. CLW's New York office creates reports from these investigations, educates the international community on supply chain labor issues, and pressures corporations to improve conditions for workers.

For More on CLW's report on "Samsung Factory Exploiting Child Labor," see the link to their PDF:http://chinalaborwatch.files.wordpress.com/2012/08/samsung8-271.pdf.

A second and more recent report by China Labor Watch was issued in early September which further investigates eight Samsung plants where they have a majority stake in ranging from 60-100%. So there's no way of Samsung getting around these issues by declaring their ignorance of these conditions of "abuse of underage workers," and many other violations. The second report which is a whopping 122 pages is oddly titled "An Investigation of Eight Samsung Factories in China: Is Samsung Infringing upon Apple's Patent to Bully Workers?

The following is just a single part of one segment of the reported noted above dealing with Samsung's plant working conditions:

"The entire production building prohibits its workers from wearing shoes. All the workers have to wear socks or shoe covers when entering the building. Previously, the restroom was equipped with slippers, but the investigator only once found a pair of slippers in the restroom during working hours, meaning workers have to go to the restroom with bare feet or socks.

The Packaging department requires workers to use ethyl alcohol to wipe cell phone covers but doesn't provide the necessary protective gear such as mask or gloves to the workers. The windows in the workshop are all closed, causing poor ventilation.

The workers have to ask for permission from the team leaders when they want to drink water or use the washroom during work. The lack of slippers when using the restroom really bothers the workers. 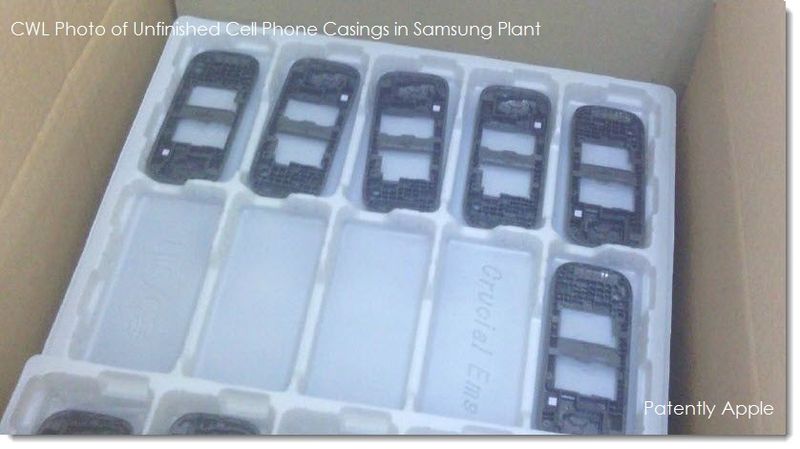 If the workers' request for leave is not permitted or workers don't work overtime as the rules stipulate, they will be punished with absenteeism and three days of wages will be deducted.

Workers have no choice but to accept overtime arrangements or else they will be punished." 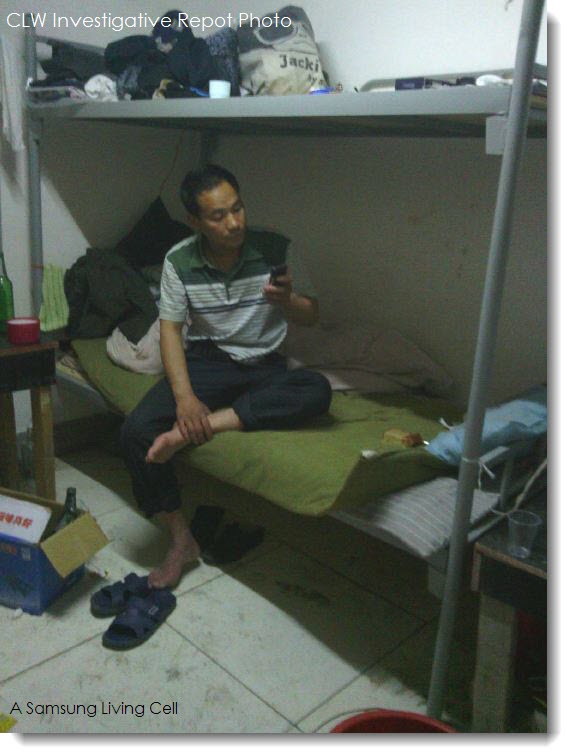 Being that Wall Street is so enamoured with Samsung of late, perhaps it's time to highlight that Samsung's phenomenal profit spike is coming in part from the cruel conditions imposed on their labor force. Not that I like what I'm hearing out of Foxconn either, but Apple has already been taken to the woodshed for their sins and is at least on paper trying to improve worker conditions. But Samsung a different cat; they want to pretend that they're the "good guys" in the press and point fingers at Apple as being the defender of patents instead of innovation. What a bunch of bunk. Today we see Samsung's true colors and they're simply greedy bastards with little care for conditions that their workforce is under each and every day. Maybe that's why Wall Street loves these guys so much.

I don't know about you, but the more that I read about what a "cool product" is costing in terms of human suffering and anguish in the Chinese labor force, the more I think that it's anything but cool.

To review China Labor Watch's second report in full, use the following URL to download a PDF: http://chinalaborwatch.org/pdf/Samsung%20Report%200904-v3.pdf

The Koreans are as bad as the Chinese about human rights and should not be trusted. Their fishing companies are even worse, physically abusing workers they sign up from other Asian nations to keep them on board for months.

Anytime someone complained about Jobs or Apple, I always point out that Samsung's CEO was convicted but then pardoned by the Korean PM. They're crooked to the core.

I'm no great apple fan, I have an iphone (soon) but no macs. But we need to wake up to the global injustice that goes into our electronics and our chocolate supply. It's time to do the right thing and vote with our dollars. Our nation spilled blood to fix such injustice, this is the least we can do.

I stated in the report, "Not that I like what I'm hearing out of Foxconn either, but Apple has already been taken to the woodshed for their sins and is at least on paper trying to improve worker conditions."

In the article you quoted above it states that "Apple said the child workers are now no longer being used, or are no longer underage."

But you're missing the point Joe. The point is that Samsung is mouthing off at every opportunity in the press about how they're an innovator and want the press to eat it all up. Well, along with insanely high profits comes scrutiny Joe, and we see that their "good guy" routine is backed by super cruel treatment of workers and the hiring of child labor. The tiny cells for their workers are little more than prison cells Joe and that's the way it is.

I'm sure you had no problem pointing to Apple's short comings and now the shoe is on the other foot.

I appreciate the thought you put into dissecting the China Labor Watch's full report and righting this up. Very insightful.

It's baffling why more outlets aren't reporting this very tragic and illegal activity. South Korea's economy is growing stronger at the expense of children while America's economy is garbage and we continue to fund them by buying their products!

I've personally talked several people out of expensive samsung purchases (I even made my dad RETURN a samsung plasma screen he recently purchased and replace it with a RCA model that was just as good) but this information needs to be passed around more broadly to make a more significant impact. Meanwhile... Apple shares are down.

Apple has admitted that child labour was used at the factories that build its computers, iPods and mobile phones.