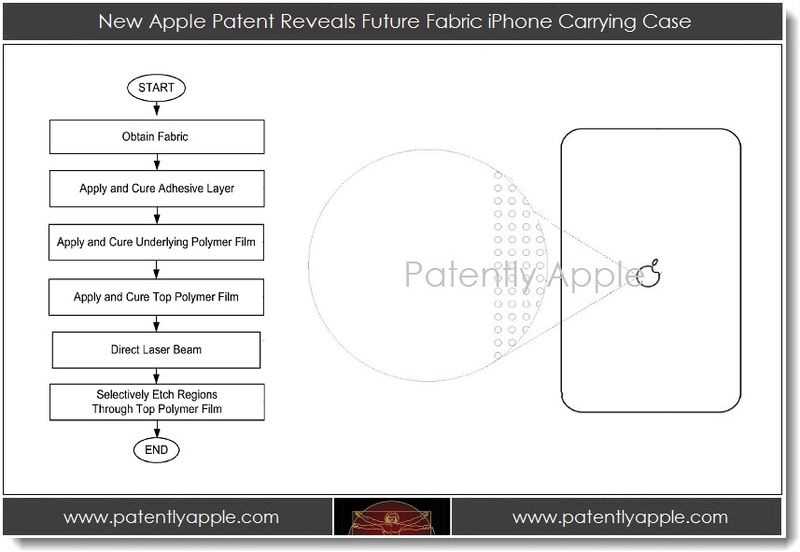 The World Intellectual Property Office revealed late last week that Apple had filed for a patent to protect one of their latest inventions relating to an all-new iPhone carrying case that's made from a combination of fabric and a plurality of polymer-based films. Apple's process will also use unbelievably accurate lasers to imprint their logo onto the fabric case with consistent impeccable quality.

For many years, embroidery, printing ink and/or a print stamping process has been used for marking fabric items with individual or band names, company logos and the like. Apple thinks that such processes are insufficient and lack accuracy and precision and have invented a new way of printing their logo on fabric that is designed for an all-new iPhone carrying case.

The proposed fabric carrying case is designed for an electronic device such as the iPhone as noted below in patent FIG. 1 may be constructed with a fabric base layer that incorporates a plurality of thick films coupled to the fabric base. Regions of the top thick film may be selectively etched through to expose an underlying film. The selectively etched regions may be arranged for marking of textual or graphical indicia on the fabric carrying case for the portable device. 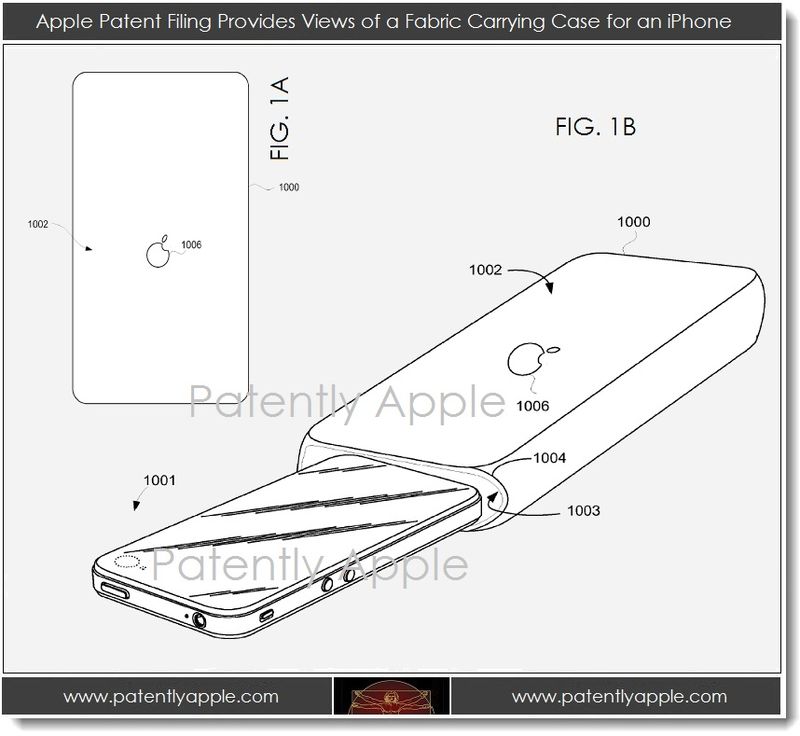 Apple states that one advantage of the invention is that durable, high precision markings can be provided to fabric articles such as this carrying case. The process laid out in Apple's patent could provide for a high quality appearance or flat or curved surfaces.

Apple's patent FIG. 9 shown below is a top view of one possible embodiment that illustrates a magnified view to show a halftone pattern. As shown, the Apple logo is clearly seen on the carrying case below in the selectively etched 9006 region. 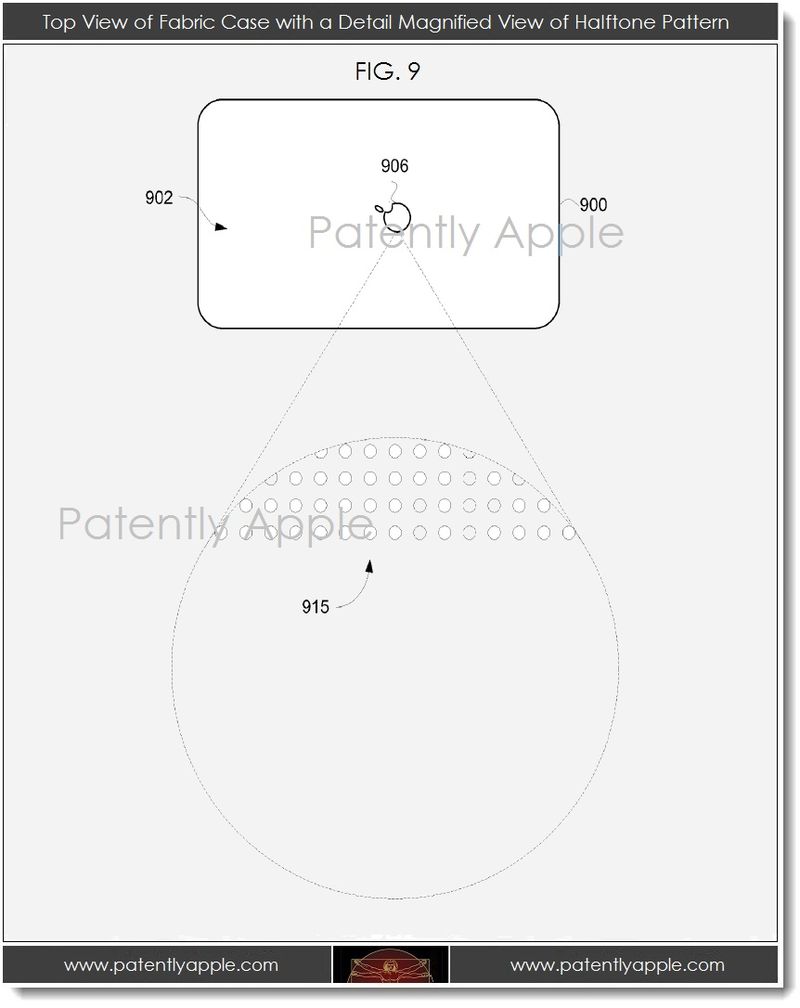 According to Apple, the size of each of the selectively etched regions may be etched-dots with a diameter of approximately fifty to sixty-five microns while in some configurations the count could go as high as one-hundred-and-twenty microns.

Apple's patent Figure 4B Shown below is a flow chart diagram of one of the marking processes considered; FIG. 6 is a table illustrating exemplary laser operation parameters. The noted laser or "optical energy" source used to create the Apple logo on the fabric carry case includes an ultraviolet laser that works in conjunction with a galvanometer mirror. 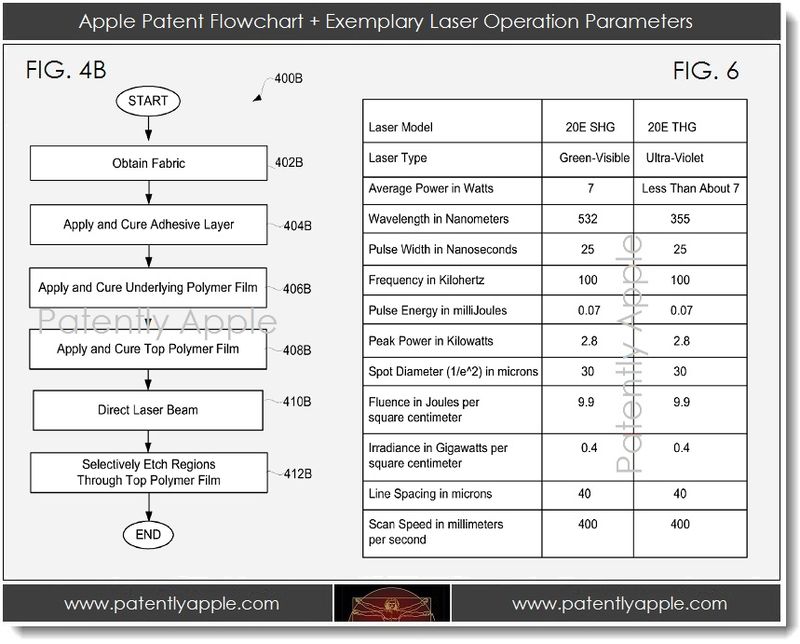 Although the patent illustrations favor an iPhone, Apple clarifies that the new fabric carrying case could equally be used with an iPod touch (PDA), iPod nano (media player), a future game controller, mouse or tablet. Though keep in mind that Apple has other plans for a next generation iPad Smart Case.

Today's noted patent application was published by the World Intellectual Property Organization (WIPO) late last week. The original international filing date is noted as being Q12012 while originally filed in the US under application 13/231,830 in Q4 2011. Technological revelations found in Apple's Intellectual Property are not to be interpreted as rumor or fast-tracked according to fictitious rumor site timetables.

Over the last 30 months there have been other carrying case designs that Apple's R&D teams have considered for future handhelds that include a design with a noise windscreen and an aggressive series of designs relating to "smart covers" to accommodate gaming, texting and more.