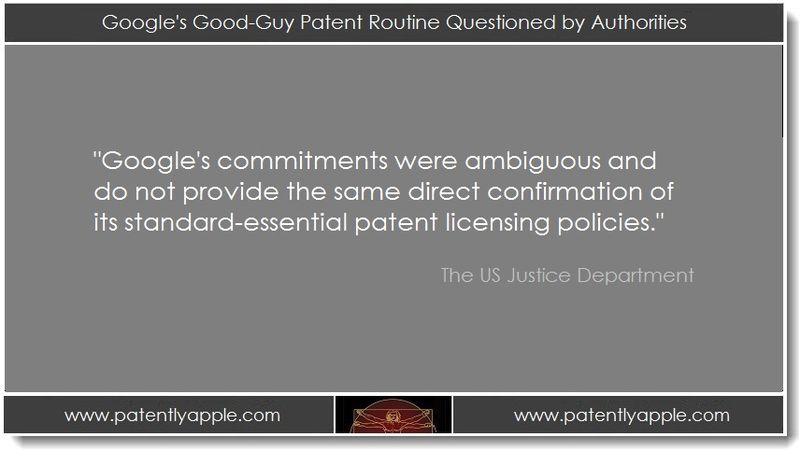 The Korean Times reported late yesterday that David Drummond, Google's chief legal officer (CLO), said that the company would continue to defend the Android ecosystem amid the rising tension in global patent disputes. While this is Google's standing good-guy routine in the public, the fact is that the Department of Justice, FTC and International Telecommunication Union don't seem to agree with them. In fact an international Patent Roundtable event being held today will be highlighting Google's practices in an attempt to find a remedy to halt damaging essential patent tactics being employed today that could harm the smartphone industry as a whole. Apple will be in attendance at this event and didn't release a pre-event statement.

During a press conference in Seoul, Drummond stated that "Android (operating system) has been about openness, more manufacturers, more carriers and everyone getting into the game. We felt that there were incumbencies that other competitors were using to stop that."

Drummond went on to state that "We acquired Motorola for a number of reasons, but a big reason was to help us protect the Android ecosystem. We were very concerned about the use of software patents to stifle innovation. We felt that if that were to go unchecked that would drive innovation down and prevent user choice."

Yet while Drummond is putting an expected spin to Google's use of essential patents, the Justice department holds a much different position on this. The New York Times reported yesterday that "The Justice Department, when it approved Google's acquisition of Motorola and the consortium's purchase of Nortel's patents earlier this year, issued a statement praising the "clear commitments" by Apple and Microsoft to license standard patents on fair terms. It also noted their pledge not to try to use such patents to seek court injunctions to stop shipments of rivals' products.

The Justice Department's statement when on to state that "Google's commitments were more ambiguous and do not provide the same direct confirmation of its standard-essential patent licensing policies."

This is why Mr. Drummond was really making the statements that he did in Korea yesterday. Knowing the views of the Justice Department and the expanded Federal Trade Commission investigation into Google's competitive behaviour in context with concerns about Google's stewardship of standard-essential patents – Google's Drummond is trying to change the public's perception of his company's position. Furthermore, the timing of Drummond's statement isn't by accident. Others are going to be scrutinizing Google's practices regarding essential patents at an today's UN sponsored patent event where tech firms and regulators are meeting to discuss this very matter. So this was a really a "pre-event" news conference that Google was holding in Korea so as to set Google up as the defenders of innovation, despite the investigations into their contrary actions and behavior.

According to a new BBC report, Leading tech firms, patent officers, regulators and academics are meeting in Geneva to address whether action is needed to prevent intellectual property disputes "stifling" innovation.

The event follows a flurry of lawsuits involving smartphone makers. It is set to focus on how to ensure licence rights to critical technologies are offered on "reasonable" terms.

Companies are split over whether they should be allowed to ban rivals' devices if they do not agree a fee.

The talks have been organised by the International Telecommunication Union (ITU), the UN agency responsible for ensuring phone-makers agree standards so that their devices can interact with each other. "We are seeing an unwelcome trend in today's marketplace to use standard- essential patents to block markets," said the ITU secretary general Hamadoun Toure when the event was announced.

The discussions occur at a time when the EU is pursuing official probes into Samsung and Google's Motorola unit to assess whether the two businesses have abused some of their patents in order to "distort competition".

Apple, Microsoft and Cisco - which are all attending the talks - have called for a change to the rules so that products cannot be blocked on the basis of standard-essential patent disputes.

"Industry standards are vitally important to the development of the internet and to interoperability among mobile devices and other computers." wrote Microsoft in evidence submitted to the ITU.

"The international standards system works well because firms that contribute to standards promise to make their essential patents available to others on fair, reasonable and non-discriminatory terms. Consumers and the entire industry will suffer if, in disregard of this promise, firms seek to block others from shipping products on the basis of such standard essential patents."

Microsoft's statement to the "Patent Roundtable" commission in Geneva went on to state that "Every now and then a patent holder may break its promise to make its standards essential patents available on reasonable and nondiscriminatory terms. These outliers create a lot of trouble for the international standards ecosystem. Once a standard like H.264 or 802.11 is widely adopted, firms have no choice but to implement the standard in their products. Would you buy a smartphone, an iPad or a personal computer that couldn't play video or connect to wireless networks? Probably not. This is why antitrust enforcers have taken a keen interest recently in patent acquisitions and attempts by patent holders to block their competitors from shipping products that implement industry standards.

Microsoft is one of several firms that have been discussing these concerns with antitrust enforcers over the past few months. In these discussions, we have offered our view that any patent holder that promises to make its standard essential patents available on reasonable and nondiscriminatory terms should do just that. That means that such patent holders should not seek to block shipments of competing products just because they implement an industry standard— a license on reasonable terms is always available. That also means that such patent holders should not require other firms to license back their patents, except for patents that are essential to the same standard. And if a patent holder sells its patents, it should contractually require the buyer to live up to these points. A promise to license patents on reasonable and nondiscriminatory terms, absent these three points, is an empty promise."

Microsoft's official statement also provided an outline, as shown below, of what they as a company are going to commit to. This could very well end up as a part of the official framework that the ITU is seeking to enforce upon its members in the future.

1.    Microsoft will always adhere to the promises it has made to standards organizations to make its standard essential patents available on fair, reasonable and nondiscriminatory terms.

2.    This means that Microsoft will not seek an injunction or exclusion order against any firm on the basis of those essential patents.

3.    This also means that Microsoft will make those essential patents available for license to other firms without requiring that those firms license their patents back to Microsoft, except for any patents they have that are essential to the same industry standard.

4.    Microsoft will not transfer those standard essential patents to any other firm unless that firm agrees to adhere to the points outlined above.

The BBC report acknowledged that others disagreed with Microsoft and Apple such as Nokia and Qualcomm. "Chip-maker Qualcomm also suggests that altering the rules could give rise to more, not less, litigation as it would encourage firms to resist their inventions being classed as standard-essential."

Apple, Intel, Philips, Huawei, Sony and Hewlett-Packard are among firms who have not released statements in advance, but have registered to attend the event. And while Google was initially on that list in the BBC article, we removed them from that list in our report because of the statements that were made by Mr. Drummond in Korea late yesterday. Although they weren't formal statements to the ITU, they were in effect Google's way of getting their position out in the public prior to the Patent Roundtable event that takes place today.

At the end of the day, Google is caught once again playing up their "good guy" routine of being the defender of innovation in the public while authorities such as the FTC, Justice Department and now International Telecommunication Union (ITU) see a much different legal stand that Google is definitely using that is anything but good for the technology sector.

The Justice Department did not cite any case in particular where Google had unfairly used their patents. It simply stated that the language of their policy is vague and would allow them to do so in the future. The main issue is Samsung has threatened to keep Apple from using their LTE patents which is a "Standard Essential Patent" in retaliation to being barred from selling their non-standard essential patent infringing products.

Enough already. When Google starts creating something that isn't filled with ads or creates their own ideas I'll listen, but for now all I hear from fans of Google is THE SAME EXACT sh*t I heard when MS was unethically destroying all competition.

If you would have read more carefully, Tom, you would have noted that it's the Deptartment of Justice who made the statement that you're in disagreement with.

Essential Patents are determined by standard-setting organizations, not Apple. It's far from legal mumbo jumbo. Because Apple is suing copycatters, Google and Motorola are using their supposed-to-be FRAND patents as a weapon to get back at Apple. This is what is being challenged and this is what is going to hurt the industry if left unchecked. The DOJ, FTC and ITU find this practice a danger. When you have these 3 organizations calling your practice wrong, it's wrong whether you like it or not, Tom.

Google's new motto: Don't be evil, cause we are!

Wait a minute -- you are dinging Google because of a non-clarification that may let them do some patent unfairness, and cite Apple as a paragon of clarity and fairness, when they just got a billion dollars and are enjoining Samsung from importing virtually every mobile product they make. Yeah, I know Apple is claiming the patents they are citing are not FRAND, but that's legal mumbo jumbo.