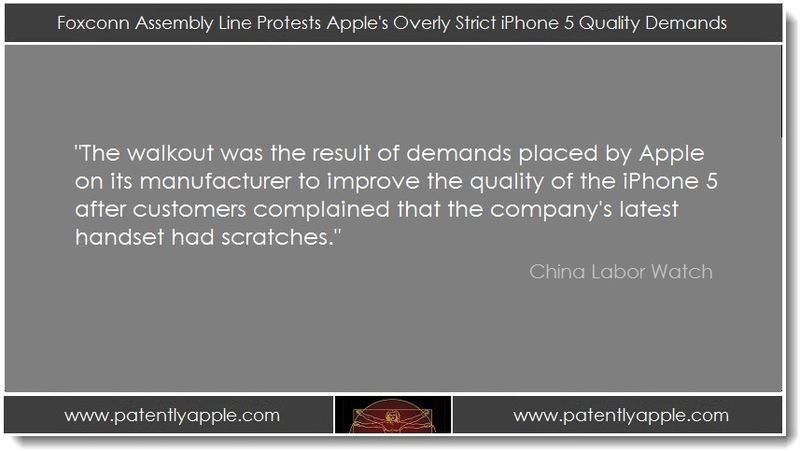 It's being reported on this morning that Foxconn Technology Group workers on an assembly line that makes Apple's iPhone 5 walked off their jobs yesterday, said advocacy group China Labor Watch. Three to four thousand production employees only returned to work today after management threatened to fire them for failure to show up for work.

The workers action happened after they were being made to work through a holiday week and being subject to "overly strict" product-quality demands without adequate training, the group said in a press release dated Oct. 5. The walkout was the result of demands placed by Apple on its manufacturer to improve the quality of the iPhone 5 after customers complained that the company's latest handset had scratches, China Labor Watch said.

China Labor Watch further stated that quality control inspectors fell into to conflicts with workers and were beat up multiple times by workers. Factory management turned a deaf ear to complaints about these conflicts and took no corrective measures. The result of both of these circumstances was a widespread work stoppage on the factory floor among workers and inspectors.

The majority of workers who participated in this strike were workers from the OQC (onsite quality control) line. According to workers, multiple iPhone 5 production lines from various factory buildings were in a state of paralysis for the entire day. It was reported that factory management and Apple, despite design defects, raised strict quality demands on workers, including indentations standards of 0.02mm and demands related to scratches on frames and back covers. With such demands, employees could not even turn out iPhones that met the standard. This led to a tremendous amount of pressure on workers. On top of this, they were not permitted to have a vacation during the holiday. This combination of factors led to the strike.

CLW Executive Director Li Qiang said, "This strike is a result of the fact that these workers just have too much pressure."

On September twenty-sixth we questioned in our report: "Were the Riots at Foxconn about Not Being Paid Overtime Related to the iPhone 5?" What China Labor Watch describes above is very much in line with the riots that Foxconn downplayed as having nothing to do with Apple.

Yet in a report that China Labor Watch made public in late July titled "Beyond Foxconn: Deplorable Working Conditions Characterize Apple's Entire Supply Chain," they stated that Apple's labor rights violations were rampant throughout Apple's supply chain and specifically at an Apple Supplier at the Riteng factory in Shanghai.

China Labor Watch's number one finding in their report was excessive overtime. The report states that the "average overtime in most of the factories was between 100 and 130 hours per month, and between 150 and 180 hours per month during peak production season, well above China's legal limits." 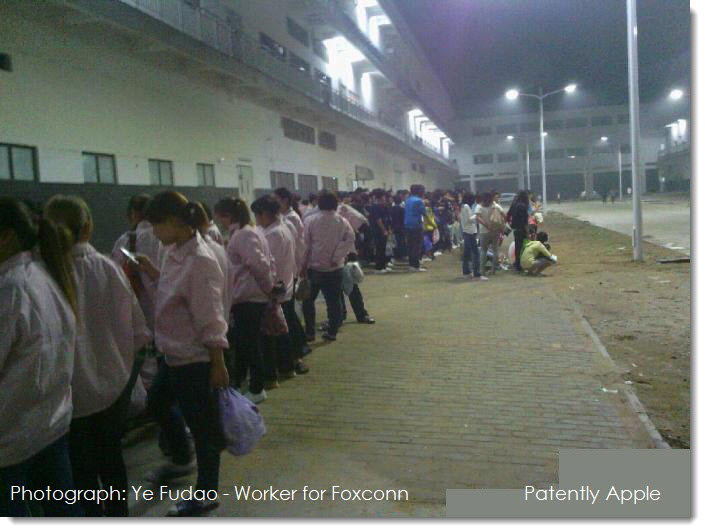 Update 11 AM: China Labor Watch Adds an Update to their Report:

"From October 1st to October 8th, it is the national Holiday in China. Foxcom [Foxconn] required workers in the ZhengZhou Factory to work during this time to meet the production demand of iPhone 5. On October 5th, workers from the OQC (onsite quality control) line went to the factory and then left due to the conflicts. Foxcom [Foxconn] denied that these workers striked. However, according to the workers, they went on strike instead of not volunteering to work overtime."

If you're asking the question who is China Labor Watch to begin with, they were founded in 2000 as an independent not-for-profit organization. In the past ten years, CLW has collaborated with unions, labor organizations and the media to conduct a series of in-depth assessments of factories in China that produce toys, bikes, shoes, furniture, clothing, and electronics for some of the largest U.S. companies. CLW’s New York office creates reports from these investigations, educates the international community on supply chain labor issues, and pressures corporations to improve conditions for workers.

So China Labor Watch isn't some little Chinese blog reporting on news in general, they're connected to labor issues and have people on the ground. That's what gives their reporting credibility over a corporation who could be saying anything  in a "statement" to keep their contract with Apple humming along. Then again, that's one man's opinion and you could judge for yourself.