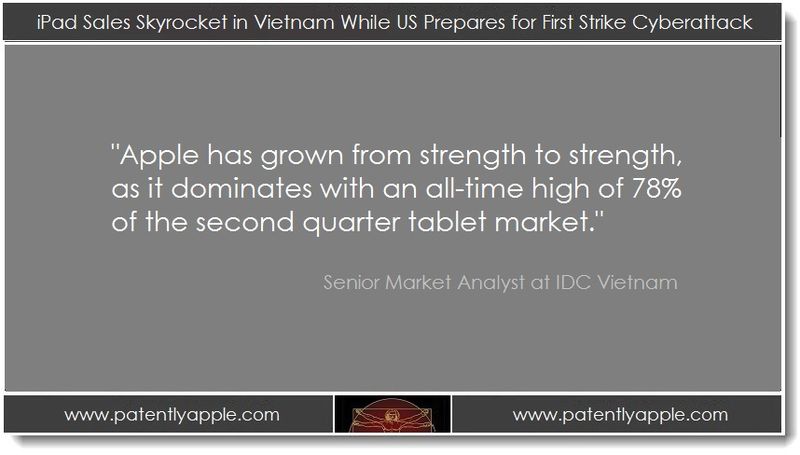 Patently Apple has rounded up a smorgasbord of interesting news tidbits this morning that cover such matters as iPad sales skyrocketing in Vietnam; Apple avoids a sales ban of their products in Korea; the US prepares for a serious first-strike cyberattack from abroad and much more.

1 Apple's iPad Sales in Vietnam off the Charts

According to a report by research firm IDC, the Vietnam tablet market registered growth of 110% during the second quarter of 2012. Pent-up demand for Apple's new iPad 3 as well as a slight dip in the price of the existing iPad 2 contributed to Apple's 170% on quarter jump. According to senior market analyst at IDC Vietnam, "Apple has grown from strength to strength, as it dominates with an all-time high of 78% of the second quarter tablet market. The company's reputation as a premium device continues to expand its following in Vietnam's brand-conscious consumer market." The iPad mini will only grow this lead and was the talk of Taiwan yesterday.

The 12th Civil Court of the Seoul Central District Court announced on October 11 that it accepted Apple's request that the prohibition of the sale of the products be lifted. "The request for the stay of execution was accepted on condition that Apple pays five billion won in deposit in court," said chief prosecuting attorney Kim Hyun-suk, adding, "The ban on sale and order for disposal of the four models will be suspended until the appellate judgment."

3 Apple is a Leader with Bluetooth 4.0

Handset makers have indicated that following Apple's footsteps, mobile platform makers such as Microsoft, Research In Motion (RIM), and Google all plan to support Bluetooth 4.0 in their next generation platforms in 2013. The commercialization of Bluetooth 4.0 has not been as popular as expected. Apple has been the only strong supporter.

According to IHS iSuppli, PC shipments are set to decline in 2012 for first time in 11 years." Yet in perspective the decline or contraction is noted to only be about 1.2%. That's neither what you would call a defeat or trend for PC's considering that millions of consumers are awaiting the release of Windows 8 and Apple's new iMac this fall. Secondly, considering that tablets, led by Apple's iPad, have filled the needs of many consumers who used to buy a PC for simpleton purposes such as email and web surfing, the PC has stood its ground quite well. In fact, according to a new report published by DisplaySearch, the rise of ultra-slim PC's are to gain traction over the next three years as display prices begin to fall over that same time frame.

At the iPhone 5 event in September, Phil Schiller reservedly mocked Samsung by stating that "It is really easy to make a new product that's bigger. Everyone does that. The challenge is to make it better and smaller." He was mocking the Galaxy SIII for its screen that is hard to hold in one hand. So, what has Samsung done, well of course, scurry to copy Apple's screen size and jam out the new Galaxy mini in Europe with no dates for other countries yet. I guess Phil Schiller did his job rather well.

Last Saturday Patently Apple posted a report titled "Foxconn Assembly Line Protests Apple's Overly Strict iPhone 5 Quality Demands." As our byline reveals, our report focused on the overly strict iPhone 5 quality demands and not the strike that others focused on because it wasn't the real issue. Well, today Bloomberg details the very issue we focused on in their latest report titled "Apple Choice of IPhone Aluminum Said to Slow Down Output" that details the issue at hand.

Cyber-attacks could inflict as much damage on the US as the physical attacks on 11 September 2001, the US defence secretary has warned. Leon Panetta said the country was preparing to take pre-emptive action if a serious cyber-attack was imminent.

He said US intelligence showed "foreign actors" were targeting control systems for utilities, industry and transport. Advanced tools were being created to subvert key computer control systems and wreak havoc, said Mr. Panetta. "An aggressor nation or extremist group could gain control of critical switches and derail passenger trains, or trains loaded with lethal chemicals," said Mr. Panetta in a speech to business leaders held on the USS Intrepid - a former aircraft carrier that is now a museum.

"They could contaminate the water supply in major cities, or shut down the power grid across large parts of the country. "Such a destructive cyber-terrorist attack could paralyse the nation and create a profound new sense of vulnerability," he said.

The New York Times added: "In a part of the speech notable for carefully chosen words, Mr. Panetta warned that the United States "won't succeed in preventing a cyberattack through improved defenses alone."

"If we detect an imminent threat of attack that will cause significant physical destruction in the United States or kill American citizens, we need to have the option to take action against those who would attack us, to defend this nation when directed by the president," Mr. Panetta said. "For these kinds of scenarios, the department has developed the capability to conduct effective operations to counter threats to our national interests in cyberspace."

Clearly the Defense Secretary Leon E. Panetta is ensuring that the public be made aware of this serious threat so that it comes as no surprise if and when such a major foreign cyberattack occurs.

Why do I get the feeling that the cyberattack could occur sooner than we think? Time will tell. In the meantime, perhaps backing up your system a little more often would be advisable (ha! You think?) 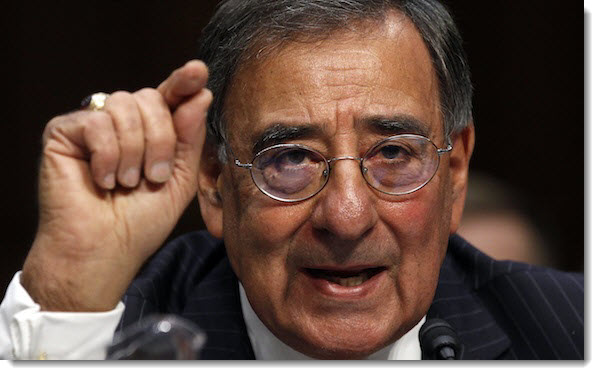 Jim Mergard, a 16 year AMD Veteran who now joins Apple's chip design team worked on AMD's 2011 chip code named Brazos. The chip was a part of AMD's fusion generation chips intelligently combining a GPU and CPU on a single chip. The chip was designed for netbooks and tablets and fully supports OpenCL which Apple invented. The design of the chip falls into the parallel computing camp which Apple has been working on for years. Apple has been granted several parallel related patents over the last few years (one, two, three).