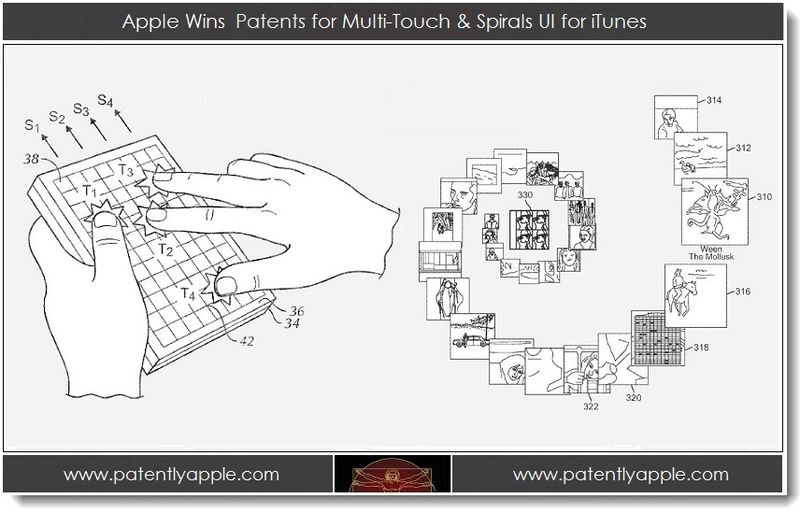 The US Patent and Trademark Office officially published a series of nineteen newly granted patents for Apple Inc. today. In this particular report we primarily cover Apple's patent wins for a Multi-Touch surface controller and a surprisingly fast win for a Spiral-like user interface replacement for today's current Cover Flow in iTunes. Other patents that we briefly look at include Apple's Mighty Mouse and a docking station that never made it to market.

Apple has been granted another strategic patent for Apple Legal in respect to Multi-Touch technology. This time around Apple has received a Granted Patent that relates to a multipoint touch surface controller that includes an integrated circuit including output circuitry for driving a capacitive multi-touch sensor and input circuitry for reading the sensor. Apple's patent also reveals various noise rejection and dynamic range enhancement techniques that permit the controller to be used with various sensors in various conditions without reconfiguring hardware. 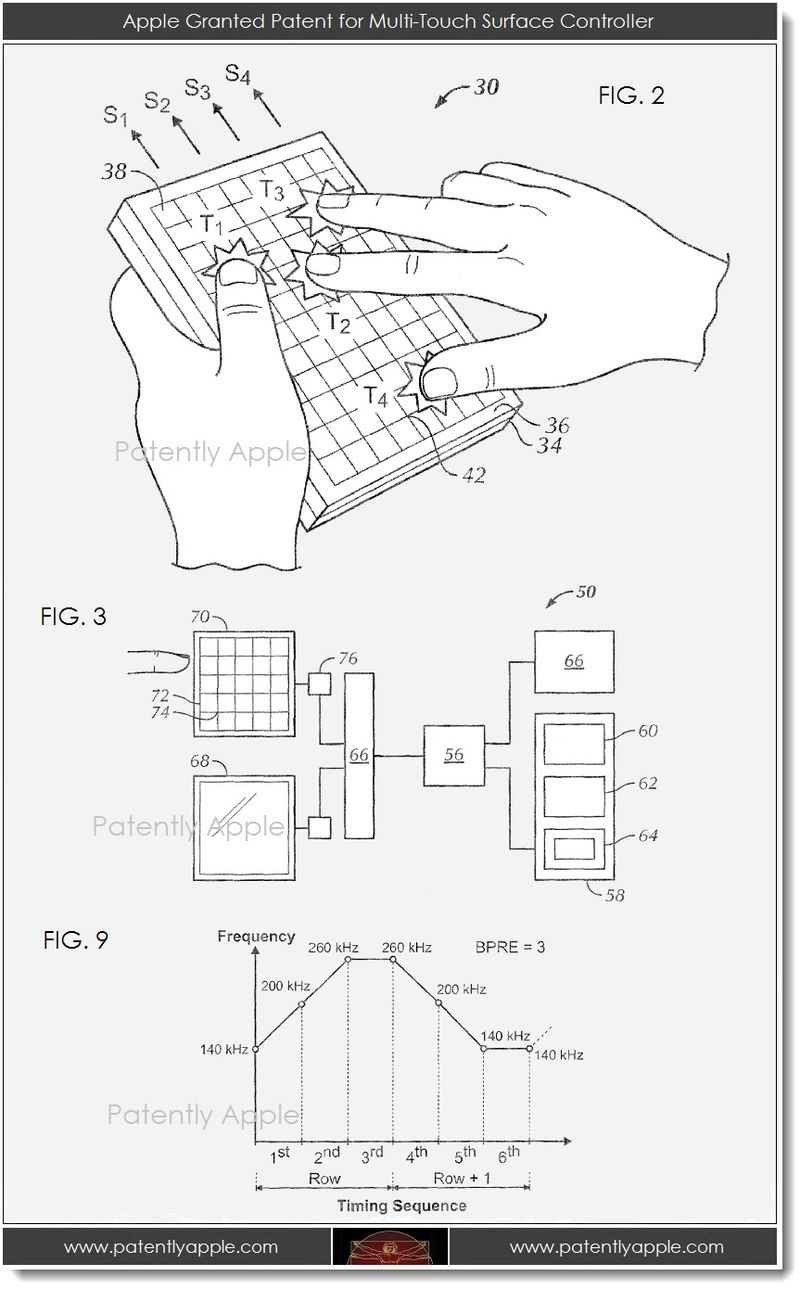 Apple credits Steven Hotelling, Christoph Krah and Brian Huppi as the inventors of granted patent 8,279,180 which was originally filed in Q2 2006 and published today by the US Patent and Trademark Office.

Apple has received a Granted Patent that relates to graphical user interface for presenting a list and more specially a graphical user interface for presenting a media list. In September 2010 Apple first introduced us to a new Spiral based iTunes UI feature and provided us with a nice overview. In December of 2010 Apple opened the flood gates and showed us that the new Spiral interface may replace Cover Flow in iTunes. The new design is said to work with both standard and Multi-Touch displays. Today's granted patent relates to the latter patent referenced. 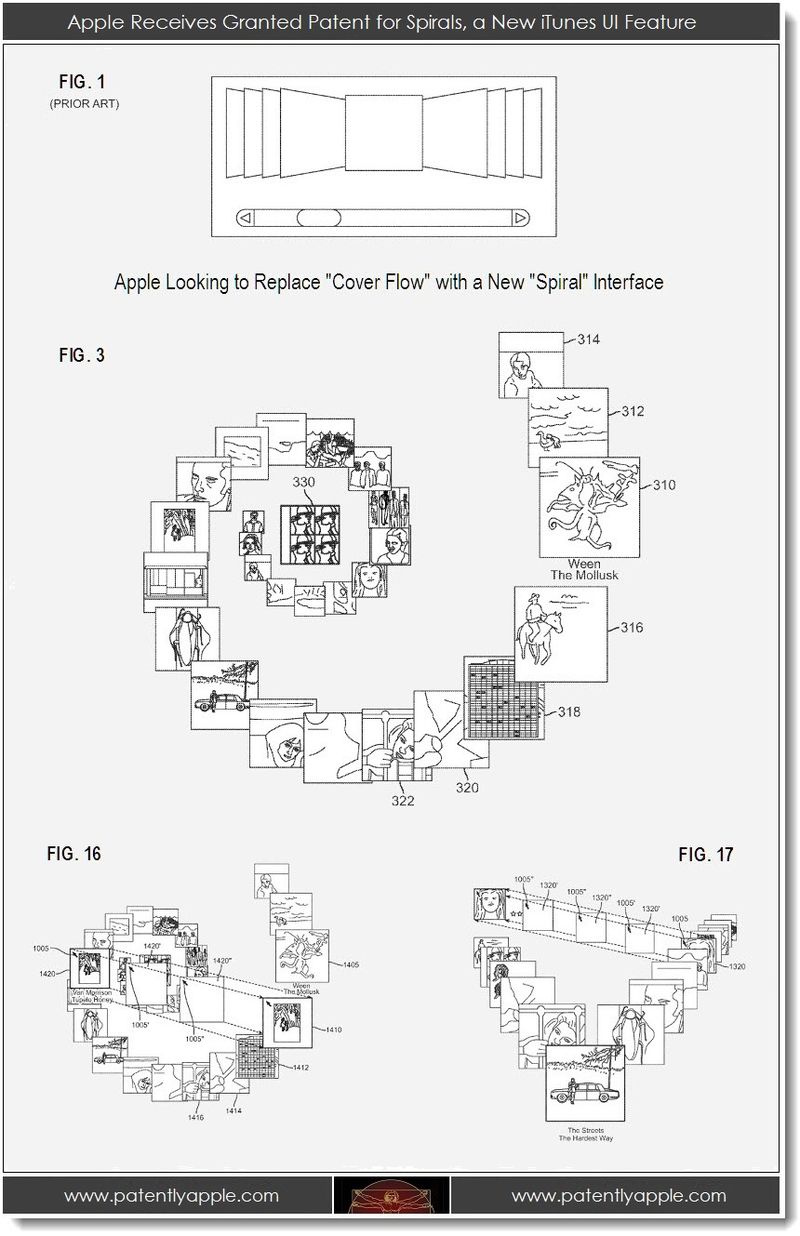 Apple credits Michael Neuman and William Bachman as the inventors of granted patent 8,281,244 which was originally filed in 2009 and published today by the US Patent and Trademark Office.

Apple granted patent for now defunct Mighty Mouse under 8,279,176: Titled "Mouse with improved input mechanisms using touch sensors." See patent figure 15 below and photo of what the Mighty Mouse looked like for those who never saw it in 2005.

8,280,465: Titled "Wireless adapter for interfacing between an accessory and a device." This is Apple's concept docking station that never made it to market. See patent figure 8 below. This filing goes all the way back to 2008 which likely means it's past it's time. Some think otherwise. I guess time will tell. 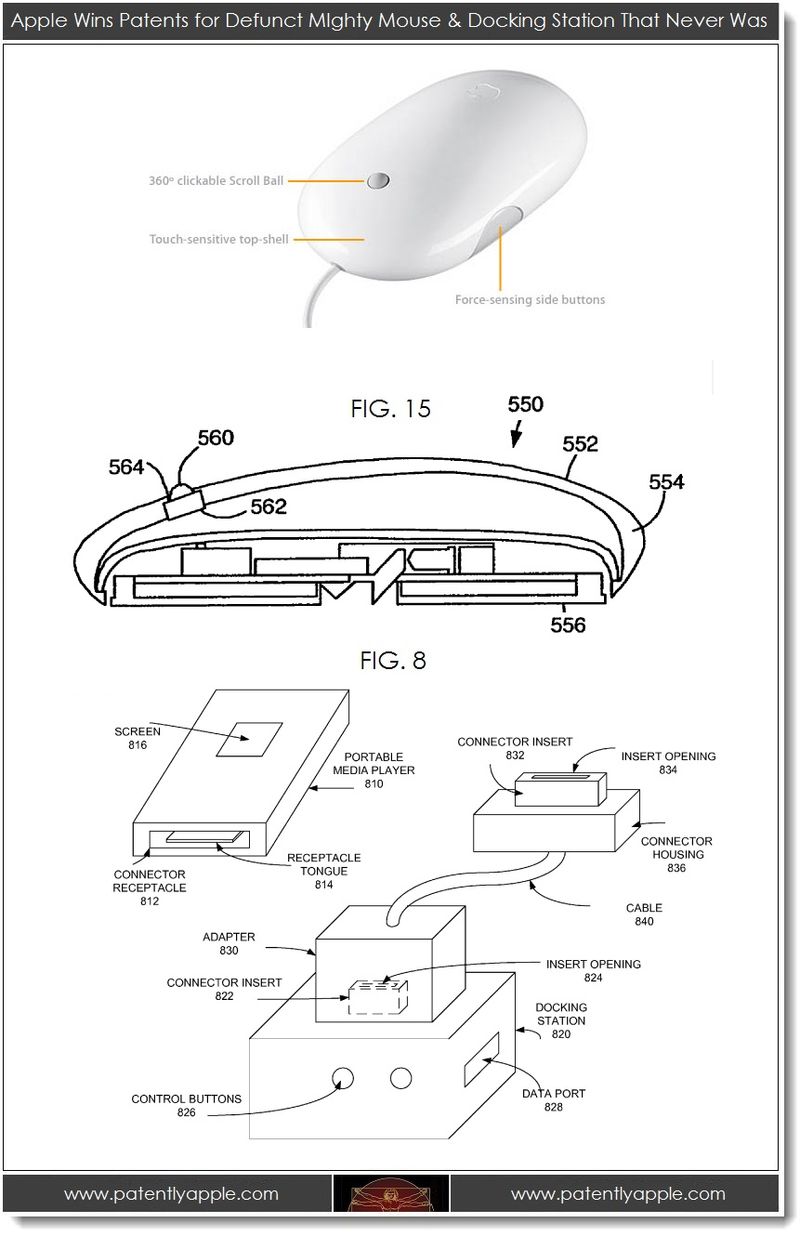 8,280,863: Titled "Real-time or near real-time streaming with compressed playlists."

8,280,171: Titled "Tools for selecting a section of interest within an image"

8,280,770: Titled "Method and apparatus for selling subscriptions to periodicals in a
retail environment."

I am to a great extent impressed with the article I have just read and have reviewed your blog and bookmarket it.