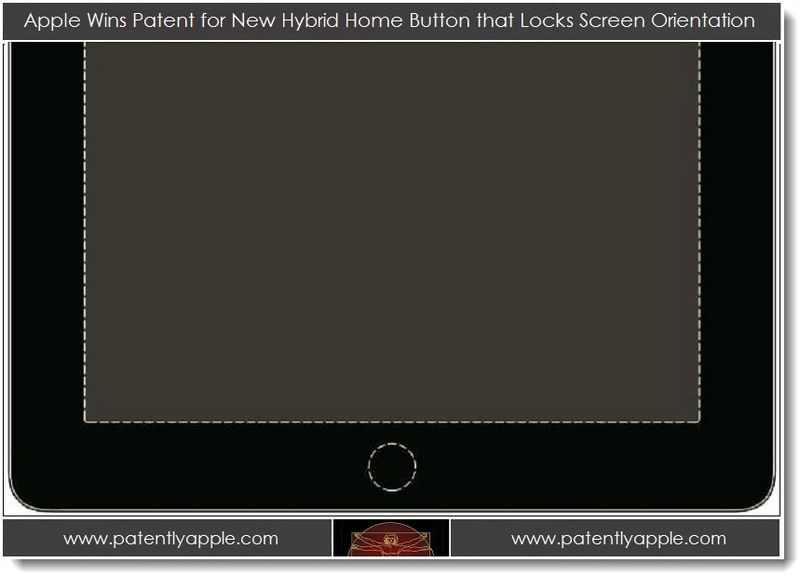 Every once and a while Apple surprises us with a new invention on granted patent day because they filed the original patent filing under one of the engineer's name instead of "Apple Inc." Today, we're treated to a granted a patent that basically reveals that Apple may be thinking of introducing a new hybrid iDevice "Home Button." Since day one Apple had their classic Home Button and more recently introduced a hybrid button for muting audio and/or locking the orientation of your display as noted here. The proposed hybrid Home Button would essentially be constructed in such a manner so as to allow the user to lock the orientation of their iDevice display from the Home Button instead of a side button that exists today. It looks like Apple's reinventing the Home Button for iDevices and it sure makes sense. (Report Updated October 3.)

Apple's patent FIG. 1 shown below is a diagram illustrating representative an iPhone, though the patent relates to any iDevice using a home button specifically but other physical buttons as well. Each iDevice could have any number of features that could be used to receive user inputs to, for example, control or influence operations of an iDevice. For example, the iPhone could include a touch sensitive display configured to present virtual control features as visual content that could assist a user in controlling selected functions performed by the iPhone. For example, a graphical user interface having various icons could be presented, each of which could be used to control or at least influence selected functions. In addition to virtual control features, various mechanical control features such as mechanical inputs 104-112 could be used to provide additional control features. Hmm, buttons 110 and 112 are mystery buttons. 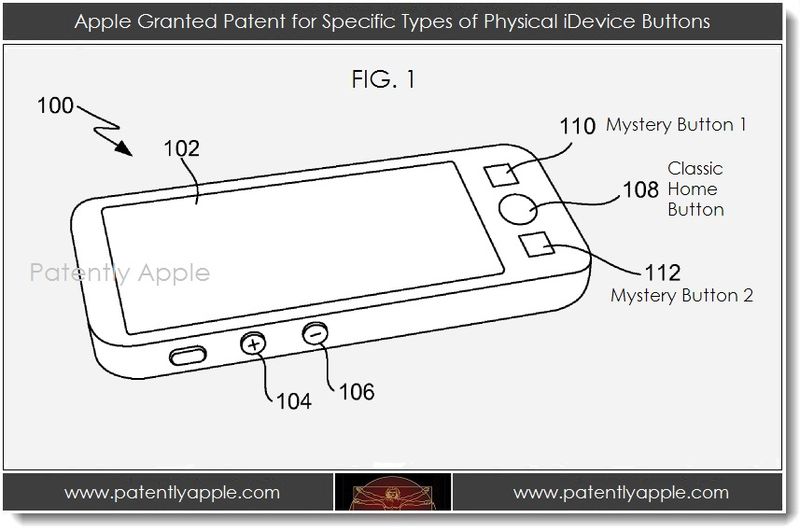 The surface of the button feature itself need not sit completely flush with the exterior surface of the housing. Button assemblies can either protrude out of the housing or be recessed within it. Additionally, some button assemblies may have portions that sit flush with the exterior surface of the housing and other portions that are either recessed or protruding. An example of this is the "home" button on the iPhone, produced by Apple Inc. of Cupertino, Calif., in which the button surface itself is concave so that it sits flush or nearly flush with the housing at its edges, while being recessed in the middle. Furthermore, buttons that ordinarily may not rotate if fully contained within a corresponding opening of a housing, such as a square button sitting flush in a square opening, may nevertheless rotate if designed not to sit flush, for example if the button is sitting completely above the top opening.

In another embodiment, an expanding fastener is built into the shaft of the button assembly. An example of this is depicted in FIGS. 5, 6, and 7. Button assembly 500 includes expanding fasteners, which may include, for example, one or more prongs 502a, 502b. The prongs, when depressed, contract towards and possibly into the shaft, and when released, expand laterally away from the shaft. The prongs may be depressed by the installer when inserting the shaft into opening 504. While passing the fastener through the opening, the sides of the opening may act to prevent the expansion of the prongs. However, once the prongs pass through to the other side of the opening 504, the prongs expand. The prongs may then act to prevent movement of the button assembly out of the opening.

There are various embodiments of how these prongs may be designed. According to Apple the "prongs essentially lock at a horizontal configuration upon opening, with the hinges themselves resisting movement beyond about a 90 degree angle and the springs acting to resist movement back towards about a 0 (zero) degree angle that would be necessary to pull button assembly back through the opening." 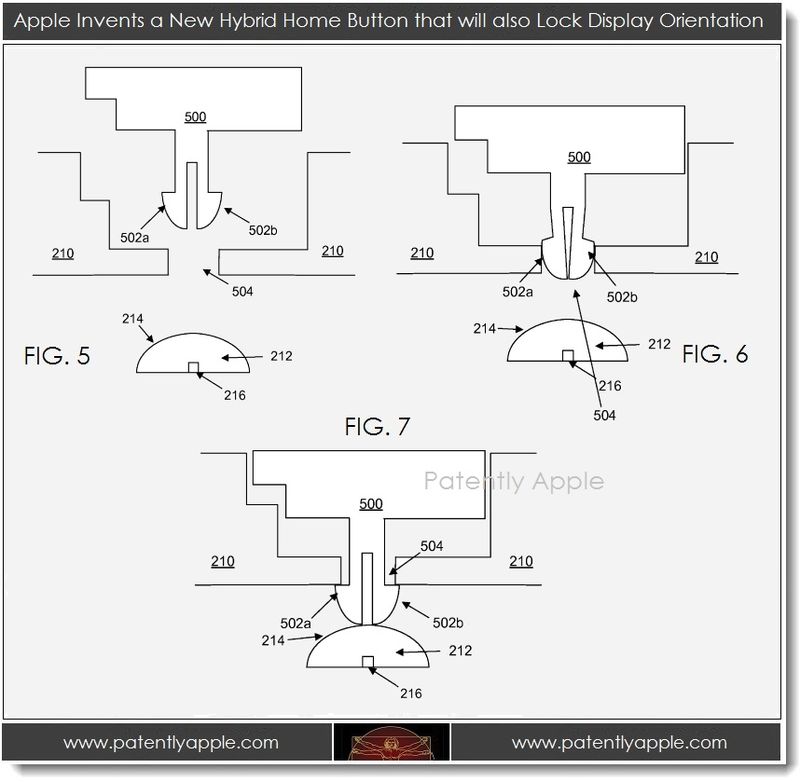 Regardless of the type of surface features and button configurations, the features themselves could be such that there is a desired orientation for the features with respect to the housing. Furthermore, even if the orientation matches after assembly, the orientation may shift over time and with use (as, for example, the user could accidentally rotate the button by applying surface pressure with a finger and moving in a clockwise or counter-clockwise motion). As such, in an embodiment, an alignment feature is provided to lock the orientation of the button assembly.

Alternate Design: A Key Integrated into the Home Button 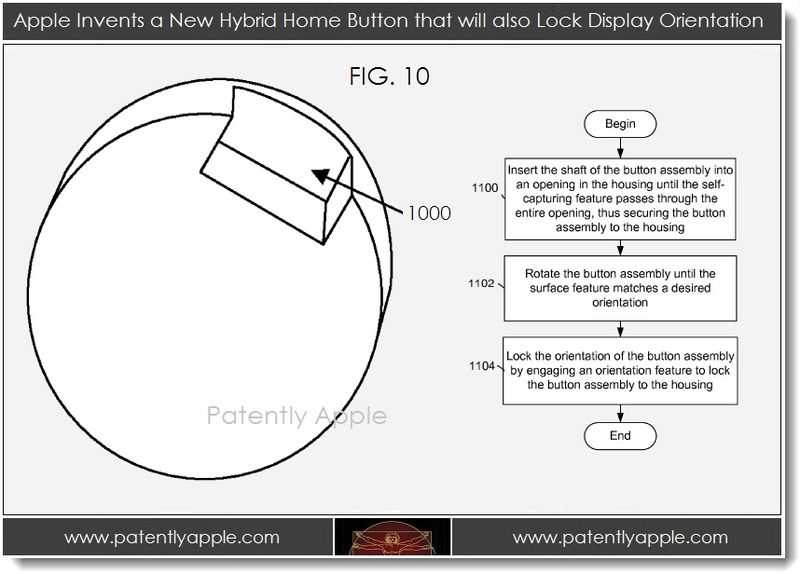 Apple's granted patent was originally filed in Q3 2010 by inventors Felix Rivera, Wey-Jiun Lin and Emery Sanford and published today by the US Patent and Trademark Office.

Update October 3, 2012: After careful review of this granted patent, it appears that the orientation of the home or other buttons don't have a connection to the orientation of the display 102 of FIG. 1. While I would love it to be so to make locking a display orientation faster to set, the fact is that the orientation is in context with buttons, especially virtual buttons. What is being conveyed in one aspect of the patent is that the orientation of the buttons could change. That's why Apple presented two extra buttons on a future iPhone in patent FIG. 1 to make that point. Let's say you have your iPhone in a vertical position and you're watching a video. The buttons 110 and 112 could be arrows to indicate go back or go forward. Yet if you shift your iPhone horizontally, the buttons must change configuration or they would indicate up or down. Of course the virtual buttons could relate to game controls or any other future functions. The idea, in one aspect of the patent, is to allow for "virtual control features" associated with buttons to change orientation as noted in patent FIG. 1 of Apple's patent to be visually identical no matter which orientation the device happens to be in. This would be a very cool future feature for virtual button orientation on the bezel, but unfortunately won't change the face-display's orientation.

Side Note: What about those Mystery Buttons?

As a side note, Apple's patent FIG. 1 illustrates two new mystery buttons. No explanation is given for those buttons that may in fact be physical buttons very much along the lines of the current home button. They could be concave, convex or flat. If you have any ideas as to what Apple could be thinking of for these new buttons, send in your comments.

The extra buttons could be used for better gaming experience on an iPod touch for example or an iPad mini...