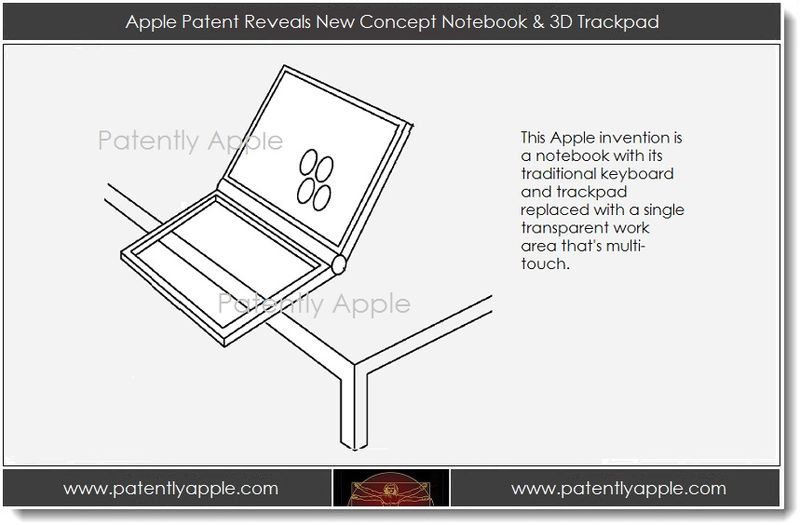 Last week Patently Apple broke the news about an Apple invention describing a new laminate notebook with a hidden display in its lid. The basic idea behind this concept had been around for some time and Intel actually presented a prototype of it at this year's Consumer Electronics Show in January. Intel's Ultrabook prototype, dubbed "Nikiski," featured a "transparent mouse-pad spanning the width of the device. When closed, the pad made it possible to continue to view the top-third of the device's screen, with the pad acting as a touch-screen interface, enabling the user to view and interact with a custom Metro UI app for quick access to social media and important information without the need to open up the Ultrabook." Coincidentally or not, this just happens to be a page right out of one of Apple's recent patent applications filed for years ago. Today we'll review the highlights of this patent that interestingly provides us with a few twists along the way.

An Old yet New Apple Invention

A new Apple invention that was discovered in Europe's Patent Office database also showed up at the US Patent and Trademark Office in recent weeks. Apple's patent, which was late coming to the public, covers an invention of theirs that relates to a track pad device which includes a capacitive array element capable of sensing touch from two surfaces and sending signals indicative of the touches.

The capacitive array element may be able to sense multiple simultaneous touches and distinguish on which side the touches are occurring. A connected processor unit, either in the device or the host system, may be adapted to interpret the signals as a cursor or view movement with six degrees of freedom.

In some of the embodiments that you're about to see, the track pad device includes a display element whereby the capacitive array element is fully translucent.

Apple's patent FIG. 1A shown below presents us with an illustration of a notebook sitting on a table with a portion of it clearly overlaping. The illustration shows us that you'll be able to see the table through the transparent panel with this new design form factor. 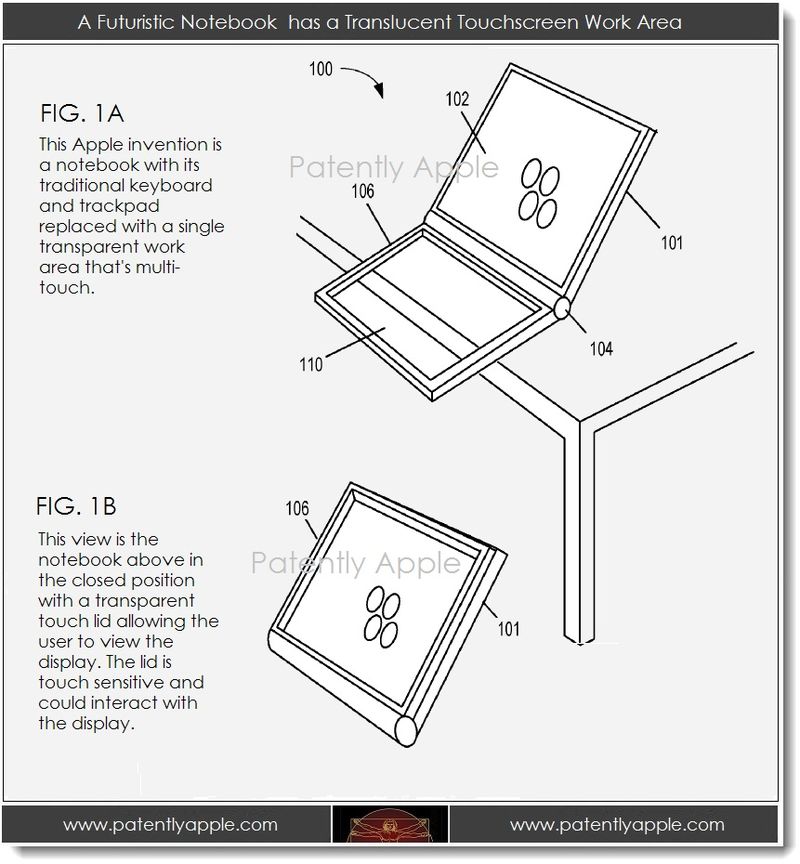 The translucent panel of the array element is sufficiently transparent so that the entire display screen may be viewed through the array element when the notebook is closed as we see in Apple's second configuration above in patent FIG. 1B. 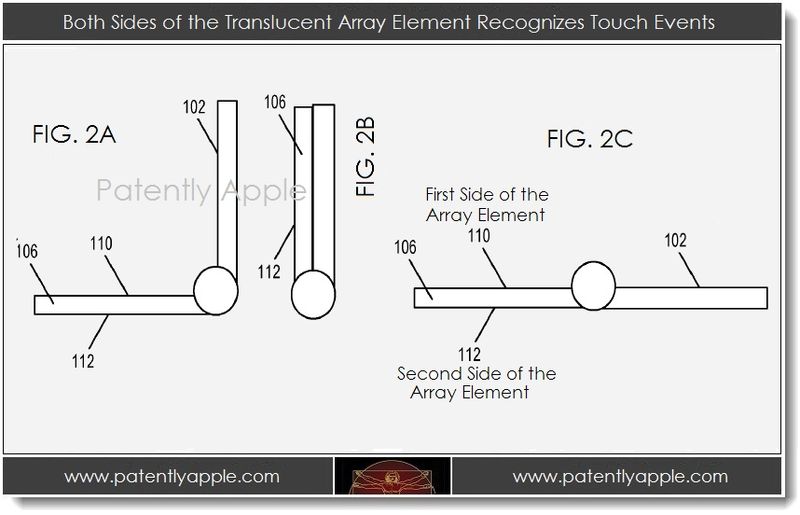 Apple notes that users will have the ability to disable the backside multi-touch functionality so that when you're in transit this function won't drain power or accidentally perform a task that it shouldn't. 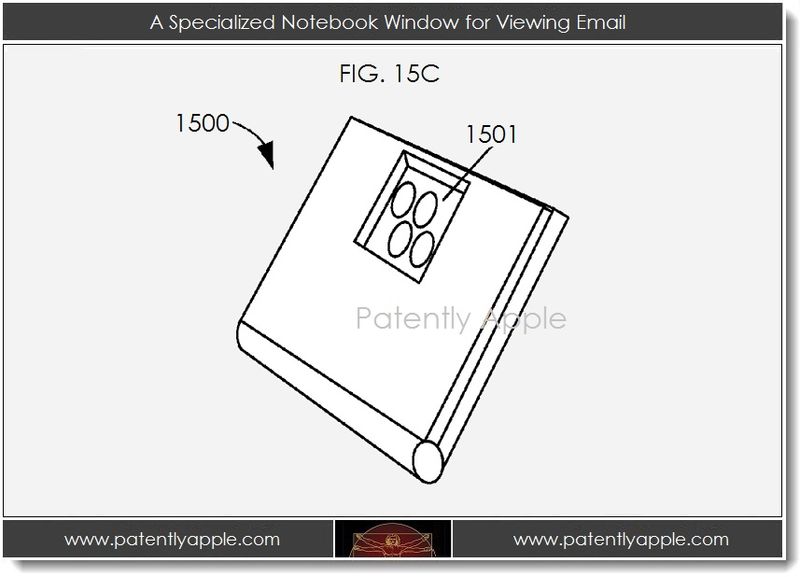 In a secondary design, Apple's patent FIG. 15C noted above illustrates a perspective view of a notebook (1500) in a closed configuration. In this configuration, the notebook automatically enables a specialized and limited "email only" functionality, including a mobile GUI (1506) which the user may interact with in a touch screen mode.

A Wild Multi-Dimensional TrackPad for 3D Apps and Games

Another notable twist in this patent application was introduced late in the patent under Apple's patent figures 16A and B describing an external stand-alone input device. Referring to FIG. 16B, the input device 1600 has a capacitive array element 1606, having a first vertical surface 1610 and an opposing second vertical surface 1612, mounted on a horizontal base 1608. 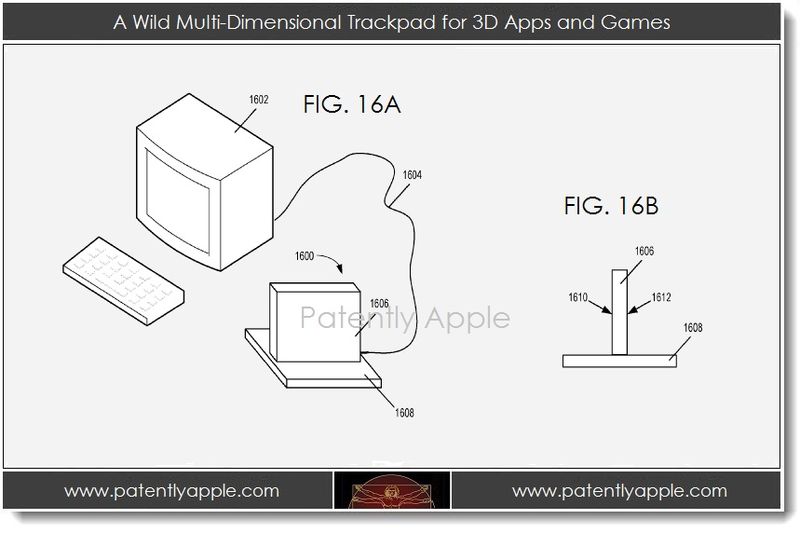 Apple notes that the new input device may be adapted to receive inputs from both vertical surfaces 1610 and 1612 simultaneously allowing for six degrees of freedom by translating gestures into lateral movement in three dimensions as well as the rotational movements pitch, yaw, and roll. This functionality enables or enhances panning, scrolling, zooming, and selecting and may be used to add greater control and ease-of-use in applications requiring three dimensional maneuvering, such as computer assisted design ("CAD"), gaming, and multimedia editing applications.

Apple's patent application was published in the US and Europe in the last few weeks. Yet what's absolutely off kilter here is that the filing clearly presents us with an original filing date of 2006 even though there's no reference whatsoever to it being a continuation patent.

Whether this patent got lost in the mail, government process or is lacking clarity in their referencing is unknown at this time – but normal it's not. On the good side of the ledger, it clearly indicates that Apple has had this idea floating around their Cupertino labs for the last six years – well ahead of Intel's prototype. And, as we noted in our opening summary, last week's patent revelation of a new laminate MacBook discussing similar technologies and applications shows us that this ongoing project is very much alive and well as of 2011. Whether new Apple under Tim Cook's leadership will be willing to do anything fresh on alternative notebook designs in the future is unknown at this time.