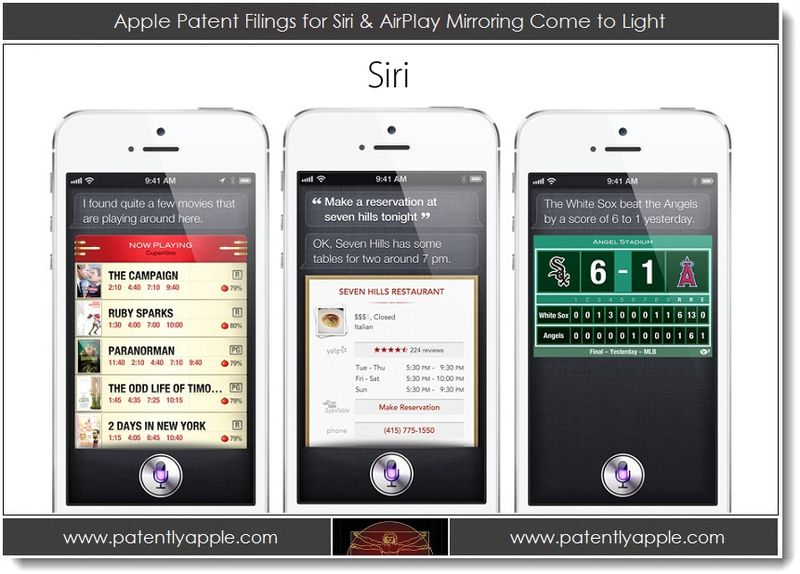 On October 18, 2012, the US Patent & Trademark Office published two key patent applications from Apple worth noting. The first is one of the original patent applications for Siri, Apple's virtual assistant, that debuted on the iPhone 4S last year. The second patent covers Apple's AirPlay Mirroring technology that allows content on an iDevice to be wirelessly transferred to a much larger display such as your Home or business HDTV or beyond.

Only a few months after Apple introduced their personal assistant feature called Siri for he iPhone 4S, we posted a report titled "Apple Introduces us to Siri, the Killer Patent." Apple's patent application was truly a complete overview of what Siri was all about. It covered such matters as Siri's conversational interface, how it could be used for e-Commerce, local and travel services, what its basic architecture looked like and even touched on understanding the context of a conversation.

Today's patent application likewise covers another wide swath of applications related to Siri as noted below:

While Apple's patent filing covers a lot of territory, their summary is focused on all things related to "Context." Examples of this include the following two excerpts:

"According to various embodiments of the present invention, a virtual assistant uses context information (also referred to herein as "context") to supplement natural language or gestural input from a user. This helps to clarify the user's intent and to reduce the number of candidate interpretations of the user's input, and reduces the need for the user to provide excessive clarification input. Context can include any available information that is usable by the assistant to supplement explicit user input to constrain an information-processing problem and/or to personalize results. For example, if input from the user includes a pronoun (such as "her" in the command "call her") the virtual assistant can use context to infer the referent of the pronoun, for example to ascertain the identity of the person to be called and/or the telephone number to use. Other uses of context are described herein.

According to various embodiments of the present invention, any of a number of mechanisms can be implemented for acquiring and applying contextual information to perform computations in a virtual assistant implemented on an electronic device. Such an assistant engages with the user in an integrated, conversational manner using natural language dialog, and invokes external services when appropriate to obtain information or perform various actions. According to the techniques described herein, contextual information is used in such an assistant, for example, to reduce ambiguity when performing information processing functions such as speech recognition, natural language processing, task flow processing, and dialog generation." 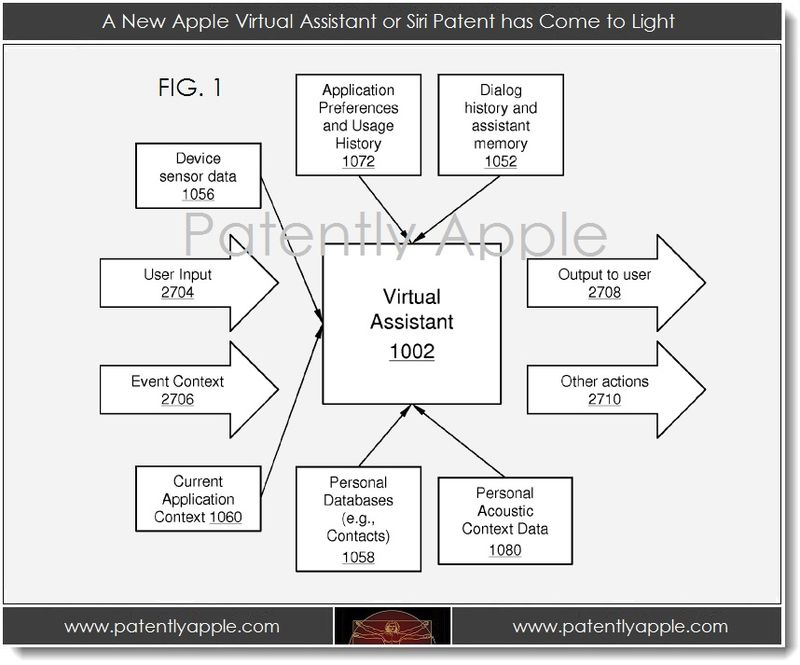 Interestingly Apple provides us with a peek at where they believe Siri will be of assistance over time beyond novelty applications. In particular, Apple points to novice users, or individuals who are impaired or disabled in some manner, and/or are elderly, busy, distracted, and/or operating a vehicle. A second Siri patent filing surfaced on January 28 discussing Siri in context with "All things hands-free" which covered using Siri in a vehicle for handling phone calls and future turn by turn navigation. During Scott Forstall's WWDC presentation in June, he announced that Siri was going to be integrated into vehicles from nine different auto companies. 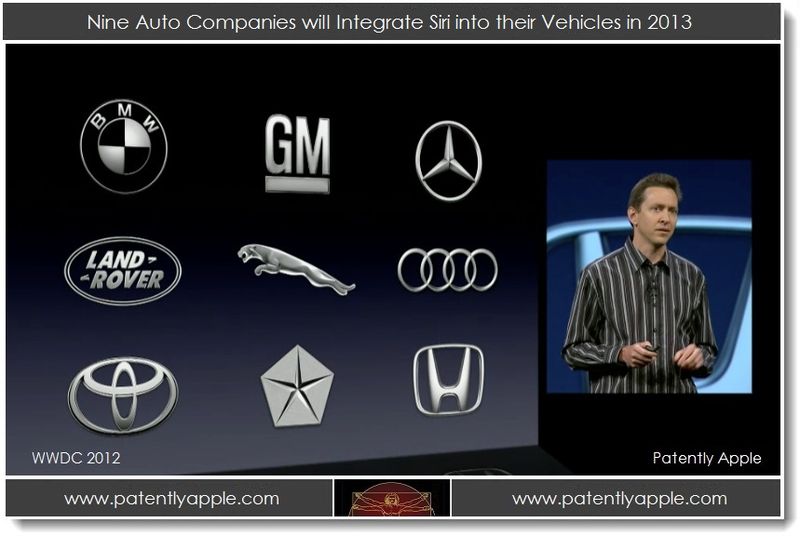 In addition to adding more languages to the Siri service, iOS 6 added more areas of expertise covering sports scores and stats, finding a restaurant, checking out movies and even the ability to ask Siri to make Facebook posts or tweets for you.

Yet Siri is a work in progress as Apple continues to add very focused applications to it in piecemeal fashion. Apple has already hinted in another patent filing that Siri may be coming to the iMac for controlling iTunes. I love Siri on my iPad for playing tunes on demand. It works flawlessly for that application and it would be a great way to introduce Siri on Mac hardware.

Apple's latest patent filing also points to Siri eventually coming to Apple TV (set-top-box), television and future kiosk applications. Apple also lists that it will be used in context with cameras, think iPhoto and with a gaming unit and/ or gaming in general which could be used for Apple's Game Center and more. So there's a long growth path for Siri as Apple continues to add in more applications for more devices and services to different niches over time. 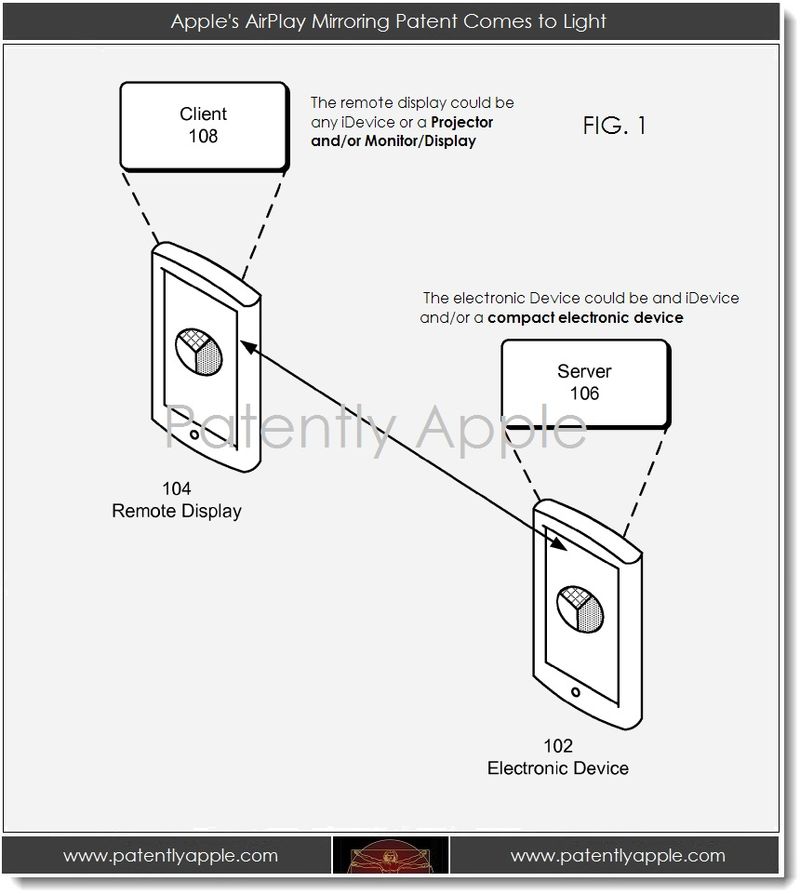 It's never been easier to capture the attention of a crowd with iPad. For larger audiences, securely stream content wirelessly from your iPad 2 to an HDTV via AirPlay Mirroring using Apple TV. With iPad 2, AirPlay Mirroring allows you to stream any app, web page, presentation, video, movie, or photo on another screen that's connected to Apple TV. Everyone sees what's on your iPad, even when you rotate from portrait to landscape, or pinch to zoom in and out. Show a product training video in a classroom, give a boardroom presentation, or display a gallery of images from your latest trade show in an amphitheater. The possibilities to make a splash with iPad are endless. 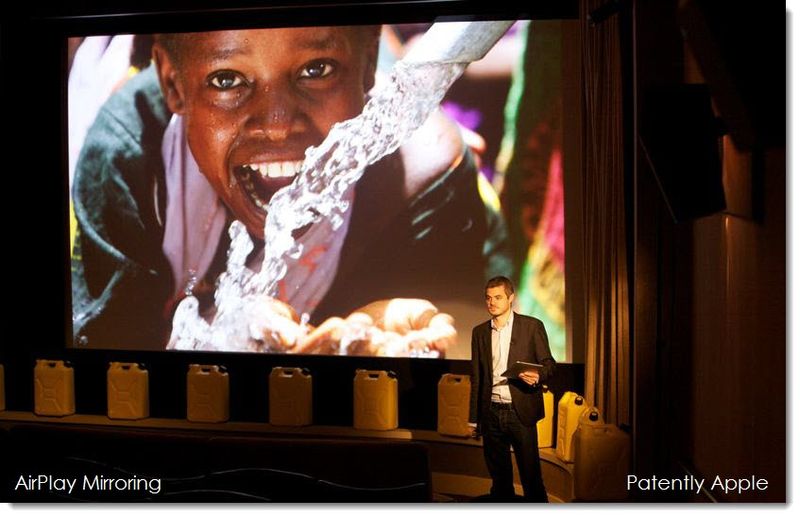 You can also connect iPad 2 to an external display, projector, or HDTV using the Apple Digital AV Adapter or Apple VGA Adapter (cables sold separately). Whichever way you send your presentation to the big screen, the Keynote app transforms your iPad into a presenter display, allowing you to choose between the current slide, next slide, or speaker notes views while your presentation appears on the large screen.

Today's patent application that was published by the US Patent and Trademark Office was originally filed in Q2 2011 by inventor Nicholas King. For those wishing to drill down further into this patent for possible future features, see patent application 20120262379.

Some other patent applications that may be of interest to some include the following: Thin Profile Rotational Switch Assemblies 20120261241; Method and Apparatus to increase Bit-Depth or Gray-Scale and Multi-Channel Images (Inverse Dithering) 20120262475; and Passive Proximity Detection 20120263019.

A Word About Continuation Patents

In addition to the main patent applications presented in today's report, the US Patent and Trademark Office did publish a series of older continuation patents dating back to between 2004 and 2010. The continuation patents that we list below are specifically referenced as such under the section titled "Cross-Reference to Related Applications." Generally speaking, continuation patents represent tweaks made to patent claims in an effort to get the patents granted by the USPTO and don't represent any noteworthy new development from the original patent filing. Here are today's continuation patents should you wish to review them:

There's no doubt that some websites reporting on patents today will in fact report on one or more of the above patents as being new for the sake of gaining clicks. Now you know better. Of course there's always an exception to the rule and the Siri patent is one of them. Apple acquired patents related to the acquisition of Siri Inc. back in 2010. As the patents are transferred to Apple via USPTO we'll report on them as new because they are to Apple.

ZDNet takes an Interesting look at patents in a new report titled "The iPhone of the future."