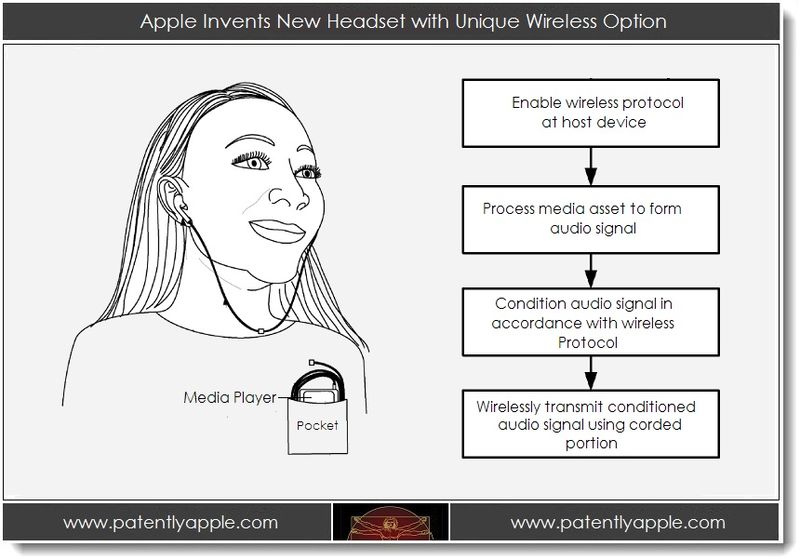 On October 4, 2012, the US Patent & Trademark Office published a patent application from Apple that reveals a rather inventive new headset that provides users with a temporary wireless option that's great for when you're working out in the gym or jogging.

However, as simple and efficient as the cord may be in transmitting the audio signal, the cord is susceptible to becoming entangled while the end user is participating in physical activity. This is particularly nettlesome since the cord connected to the personal media player used while exercising or worn on the body requires frequent adjustment to avoid entanglement which could prove distracting or in some cases present a hazard to the end user.

Therefore, what's desired are improved techniques for listening to audio on a media player when a user is engaged in physically activity.

Broadly speaking, Apple's invention describes at least a media apparatus that provides an end user of a personal media player a pleasurable listening and unencumbered experience during physical activity. 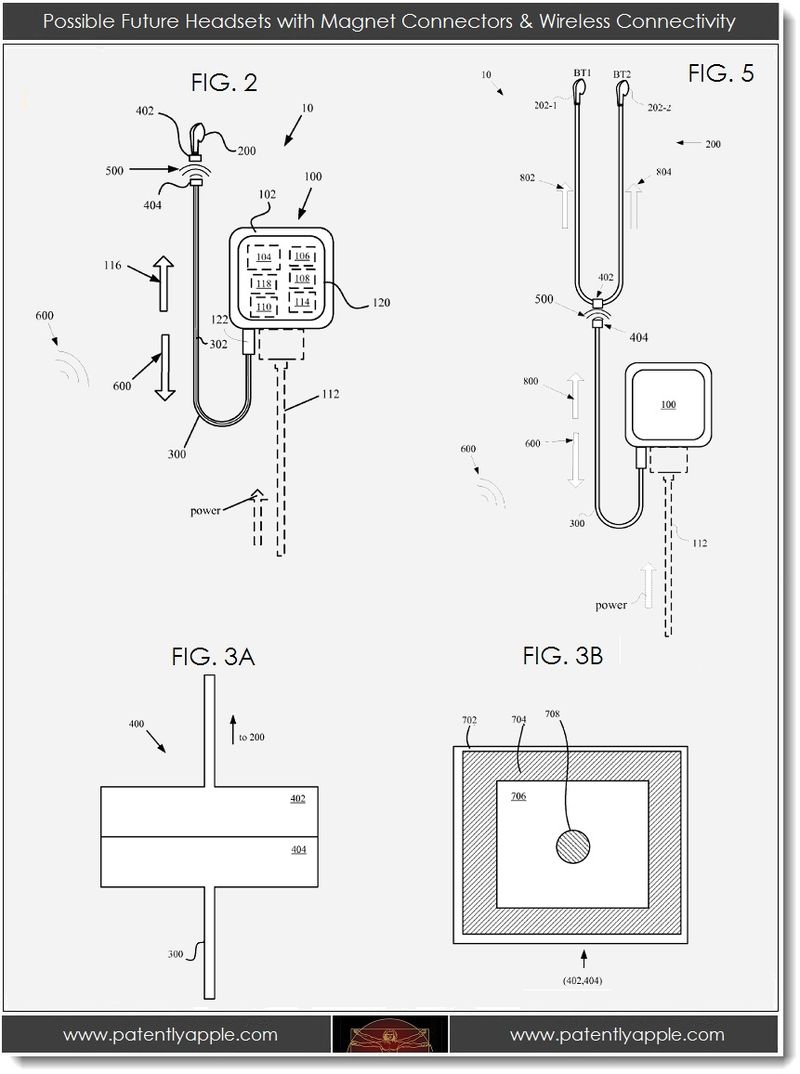 Designed for 30-60 Minute Workouts or Timespans 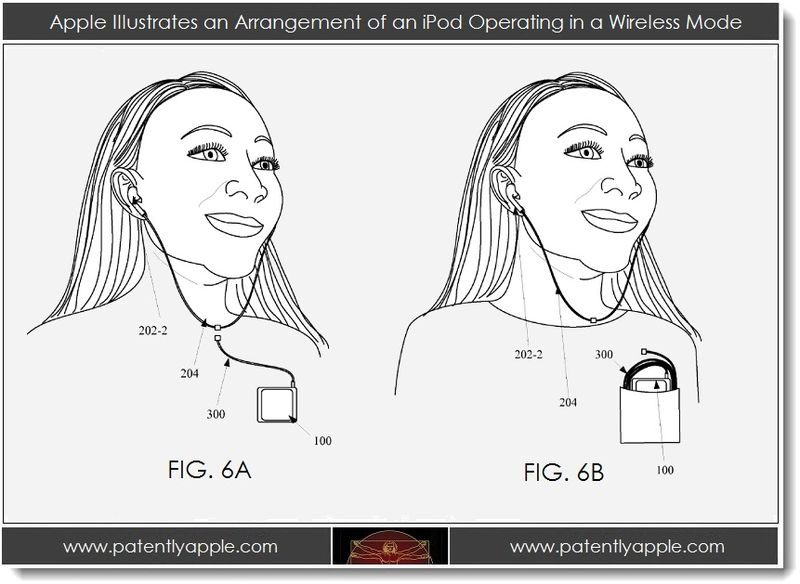 An Old 2008 Patent Application: Tactile Feedback in an Electronic Device

Another patent application published this morning titled "Interactive menu elements in a virtual three-dimensional space," covers the very same content as found in our April 2012 report titled "Apple Reveals New Whiz-Bang No-Code Content Authoring Tool." Apple's patent application can be reviewed under 20120254791. Below is one of the new elements worth noting in this patent: The Slidable Menu 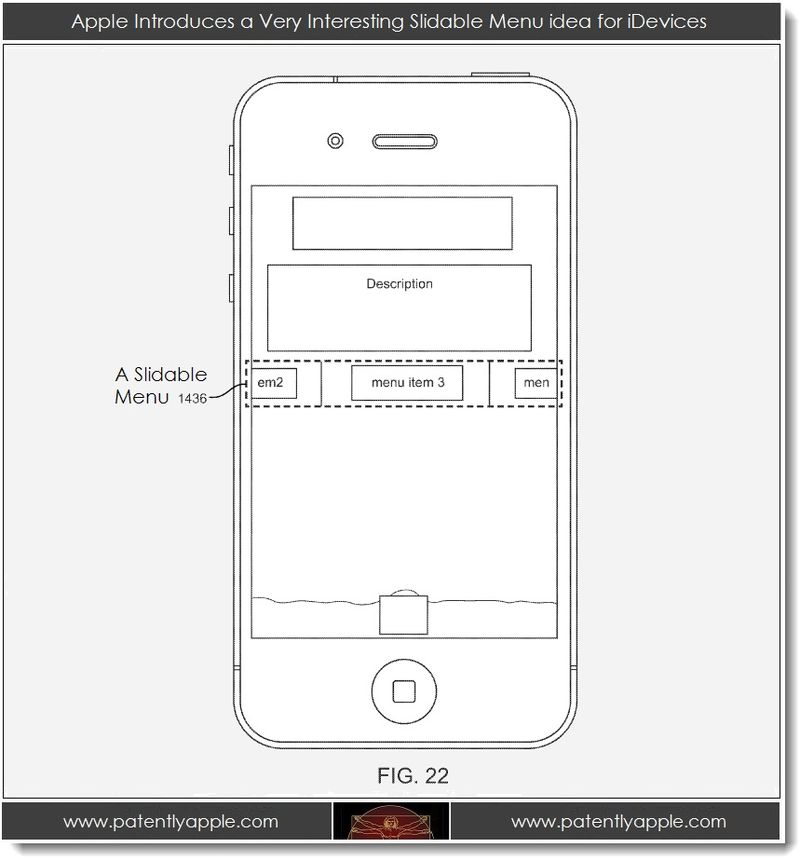 Apple's patent FIG. 22 relates to Apple's possible future no-code content authoring tool. In the example above we see an example sliding strip menu JavaScript element. A user could scroll through menu items by freely sliding the menu, which can be in the form of a horizontal strip 1436 across the screen. The menu could be slid or shifted to any position of the user's choice without the background having to change. Although this is an authoring tool option for a user interface, I thought I'd bring it to light because this could actually be a little killer idea for iDevices.

To Our Fan Base: This friendly October note is to remind our loyal fan base that the ads on our site provide Patently Apple with a source of income for our efforts. The advanced ads on our site are interactive and we only get paid when you click to expand any given ad and interact with it. We would certainly appreciate if you would take 30 seconds of your time and check out one of our ads each time you visit our site. Thanking you in advance for your cooperation

Maybe I am over reacting, but I am not certain where the antenna portion of the ear bud is for the conjoined ear phones. If it is at the connection point, where in Fig. 6A, the two disparate wires will dock to make a non-wireless connection, then Apple could have a health problem.

The wire would be transmitting at the level of the larynx and the thyroid. Could that not pose a problem with prolonged usage?