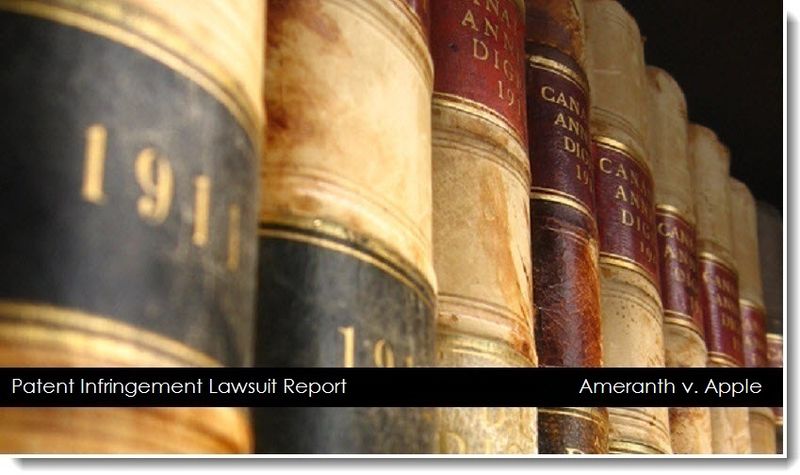 A California base company by the name of Ameranth has filed a patent infringement lawsuit against Apple. Ameranth's "award winning" inventions enable generation and synchronization of menus, event tickets, and other products across fixed, wireless and/or internet platforms. Ameranth is suing Apple on four counts related to the Passbook Ticketing System that is integrated with iPhone 5 and other iPhone and iPod Touch devices that are running Apple's iOS-6 software, and linked to/with Apple's iCloud, the "Apple Notification Service", and Apple's Safari browser. One of Ameranth's patents were quoted as prior art in an iPhone patent that listed Bas Ording and the late Steve Jobs as inventors.

Plaintiff Ameranth is a Delaware corporation having a principal place of business in San Diego, California. Ameranth develops, manufactures and sells, inter alia, hospitality industry, entertainment, restaurant and foodservice information technology solutions under the trademarks 21st Century Communications, and 21st Century Restaurant, among others, comprising the synchronization and integration of hospitality information and hospitality software applications between fixed, wireless and/or internet applications, including but not limited to computer servers, web servers, databases, affinity/social networking systems, desktop computers, laptops, "smart" phones and other wireless handheld computing devices. Ameranth's "Information Management and Synchronous Communications" patent family has been widely recognized as visionary, and the original patent in this family, U.S. Patent No. 6,384,850, was cited as a prior art reference in two Apple iPhone patents issued to named inventors Bas Ording and Steven P. Jobs.

Ameranth's complaint didn't provide the patent number to the iPhone patent noted in their complaint.

Ameranth's award winning inventions enable, in relevant part, generation and synchronization of menus, including but not limited to restaurant menus, event tickets, and other products across fixed, wireless and/or internet platforms as well as synchronization of hospitality information and hospitality software applications across fixed, wireless and internet platforms, including but not limited to, computer servers, web servers, databases, affinity/social networking systems, desktop computers, laptops, "smart" phones and other wireless handheld computing devices.

Ameranth began development of the inventions leading to the patent-in-suit and the other patents in this patent family in the late Summer of 1998, at a time when the then-available wireless and internet hospitality offerings were extremely limited in functionality, were not synchronized and did not provide an integrated system-wide solution to the pervasive ordering, reservations, affinity program and information management needs of the hospitality industry. Ameranth uniquely recognized the actual problems that needed to be resolved in order to meet those needs, and thereafter conceived and developed its breakthrough inventions and products to provide systemic and comprehensive solutions directed to optimally meeting these industry needs. Ameranth has expended considerable effort and resources in inventing, developing and marketing its inventions and protecting its rights therein.

Ameranth's pioneering inventions have been widely adopted and are thus now essential to the modern wireless hospitality enterprise of the 21st Century. Ameranth's solutions have been adopted, licensed and/or deployed by numerous entities across the hospitality industry.

The adoption of Ameranth's technology by industry leaders and the wide acclaim received by Ameranth for its technological innovations are just some of the many confirmations of the breakthrough aspects of Ameranth's inventions. Ameranth has received twelve different technology awards (three with "end customer" partners) and has been widely recognized as a hospitality wireless/internet technology leader by almost all major national and hospitality print publications, e.g., The Wall Street Journal, New York Times, USA Today and many others. Ameranth was personally nominated by Bill Gates, the Founder of Microsoft, for the prestigious Computerworld Honors Award that Ameranth received in 2001 for its breakthrough synchronized reservations/ticketing system with the Improv Comedy Theatres.

In his nomination, Mr. Gates described Ameranth as "one of the leading pioneers of information technology for the betterment of mankind." This prestigious award was based on Ameranth's innovative synchronization of wireless/web/fixed hospitality software technology.

The first count against involves patent 6,384,850, the patent that they claim was cited as a prior art reference in two Apple iPhone patents issued to named inventors Bas Ording and Steven P. Jobs. 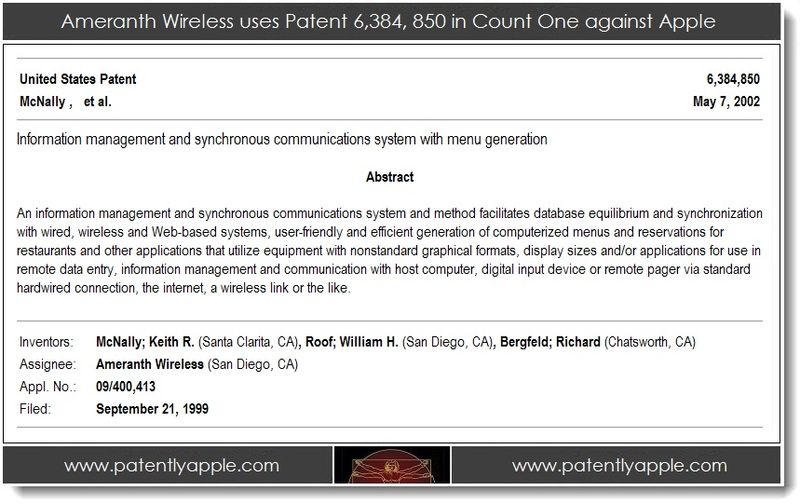 The Following are Excerpts from Ameranth's Formal Complaint

In or about September 2012, Apple introduced Passbook, a product/service available on iPhone and iPod Touch devices that are running Apple's iOS-6 software. The Passbook "pass styles" that Apple has defined as "boarding pass" and "event ticketing" permit the downloading and storage of, inter alia, airline boarding passes, hotel reservations, movie tickets, and event tickets (e.g., Fandango movie tickets, Ticketmaster and StubHub event tickets, and American Airlines and United Airlines tickets and boarding passes) to an iPhone or iPod Touch, from which the ticket or boarding pass can be displayed and scanned at, for example, the appropriate movie theatre, event venue, hotel, or airport. Passbook may be used by downloading a Passbook-compatible app (e.g., for Fandango, Ticketmaster, StubHub, or United Airlines) from Apple's "App Store" for the merchant corresponding to the "tickets" that are to be stored in Passbook.

Furthermore, the complaint states in their belief, Apple directly infringes and continue to directly infringe one or more valid and enforceable claims of the '850 patent by making, selling, using, offering for sale or license and/or selling or licensing infringing systems, products and/or services in the US including but not limited to " the Passbook Ticketing System (hereinafter "PBS") which includes the "pass styles" that Apple has defined as "boarding pass" and "event ticketing" applications within Passbook, which permits the downloading and storage of, inter alia, airline boarding passes, hotel reservations, movie tickets, and event tickets, and is integrated with iPhone 5 and other iPhone and iPod Touch devices that are running Apple's iOS 6 software, and linked to/with Apple's iCloud, the "Apple Notification Service", and Apple's Safari browser.

Ameranth believes that the infringement of their patents were willful, which in legalese means that they're requesting that the judge award them triple damages in this case.

The case was filed in the United States District Court, Southern District of California. The presiding Judge in this case is noted as being Judge Anthony J. Battaglia and referring Judge as Judge Bernard G. Skomal.