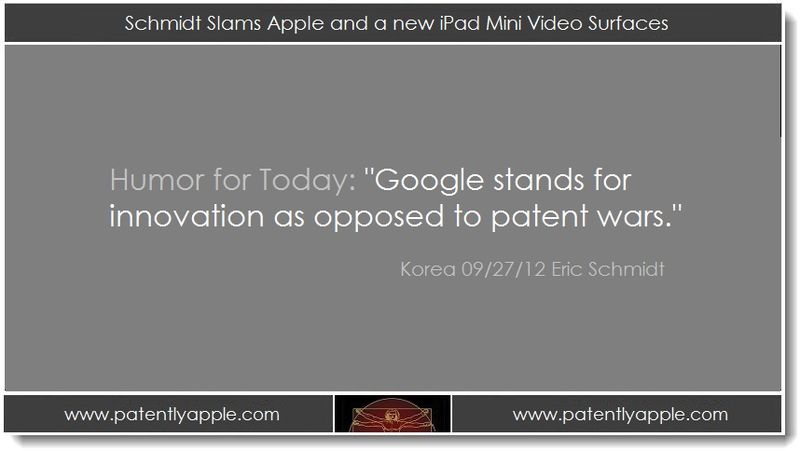 Eric Schmidt had a lot to say in yesterday's news conference in Korea. The CEO of Google played it up for the Korean audience and slammed Apple at every turn. In other news, the Japanese site Macotakara is back with another apparent scoop with a supposed video of the iPad Mini and it's worth a look for sure

Here's a photo from Macotakara showing this supposed "iPad mini" in view of a MacBook Pro screen to give you perspective. 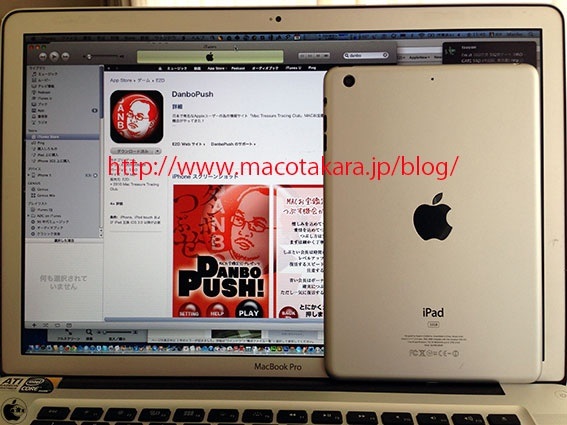 What are your thoughts on this iPad mini mock-up - Is it the real thing? Send in your comments.

If you can't innovate then Complain Loudly about the Innovators

The Korean Times is reporting that Google Executive Chairman Eric Schmidt made it clear yesterday that he is against patent wars in the mobile phone industry, expressing his frustration with Apple's recent move to file a myriad of legal attacks against users of the Android operating system (OS), including Samsung Electronics.

He stressed that companies should compete in the market place with products, saying that patent disputes are hurting consumer choice and preventing innovation.

"Literally patent wars prevent choice, prevent innovation and I think that is very bad. We are obviously working through that and trying to make sure we stay on the right side of these issues. So ultimately Google stands for innovation as opposed to patent wars," Schmidt said in a launching event for the company's Nexus 7 tablet at the Grand Intercontinental Seoul.

He said Google feels very strongly that ultimately companies must vie in the market place with better products. Similar statements, such as "innovation and choice" have been used by Samsung Electronic as jabs against Apple after it lost a patent case in San Jose, California.

"I think one of the worst things that happened in the last few years has been the belief that somehow there are so many patents in the mobile phone world, an estimated 200,000 that are overlapping and complicated and so forth, that one vendor can stop the sale of another vendor's phones or devices.

"With respect to Apple patents, the best thing we can tell there are plenty of prior arts and I don't want to go beyond that," he added.

Many speculate that Apple's real target is Google. Answering questions on whether Google will assist vendors, Schmidt said: "all I want to say publicly (is that) we fully intend to support the ecosystem as it evolves. The Android ecosystem is really central, in my view, to the successful moving forward of the market."

To finish it all off, Schmidt said that Apple "is actually a very good partner. Our two companies are literally talking all the time about everything." Get real Schmidt. Apple is dumping everything Google as fast as humanly possible. Once again, Judas speaks on both sides of his mouth.

Schmidt was in Korea to visit vice chairman Choi Ji-sung and president of Samsung Shin Jong-kyun. 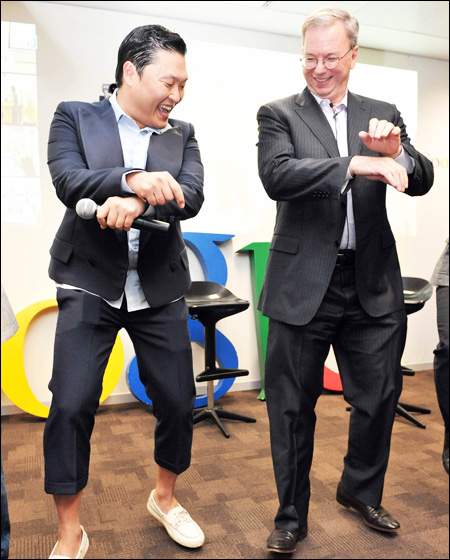 It appears that Schmidt is dancing to Samsung's Tune

On a final note, The Korean Times reports that Samsung is being sued by LG Display over infringement of its patents for organic light-emitting diode (OLED) screens and will seek injunctions on Samsung smart-phones and tablets using the disputed technologies.

Stock ICS had panorama built into the stock camera app. That was last year. Some Gingerbread devices have it added on with stock OEM addon's (ie Motorola's OEM skin).

Yes, there are several third party solutions for panorama-like features I see. But it's not an Android app created from Google. Am I wrong here? Let me know Kimir.

"Then again, I haven't seen an equivalent to Apple's new iPhone Panaorama camera feature anywhere. For camera buffs, that is a new wow feature."

Are you joking? That's been out for nearly a year on android 4.0+ devices.

Well said, Jack. I agreed with you and good logic sense of what's going on with big tech. You know, Apple has money and could take Samsung own copycat phone design away. There will be no more Samsung phone. Apple decide not to go after them... yet. ( bidding )

Second, I feel strongly, in about 5 years I see Google and Apple merged together to make one of biggest and powerful tech in the world!!!! Why? Apple wants something from Google. Google wants something from Apple. Make sense... if they work together like this Apple-Google Inc. All other smartphones that Google has.... will be gone. Just focus on these two phones. Google Nexus & Apple iPhone.

I appreciate your honest opinion, Taylor, even though I disagree.

Seriously, Tim Cook did the right thing to apologize. If Google had to apologize for every screw-up and short-falling of Android it would take forever. Their face recognition was fooled by a photo for godsake. So you're argument fails to be honest.

As for flex displays, I guess you didn't read our report. Apple isn't trying to shoot for goofy and never-to-be used warped flex displays that we saw at CES. Does anyone really want to buy a smartphone that looks like a question mark? Are you kidding me? Apple's patent showed that they're researching new ways to utilize flex screens beyond the silly design dimension. Samsung loves gawdy and confuses that with innovation. That's just expected from a copycat mindset. Absolutely no class.

As for innovation, I guess we don't see eye to eye on that either. Apple still has the number one music players after a decade and they keep their line-up fresh. They also have the number one music platform in the world called iTunes. Google and Microsoft have yet to compete with iTune after a decade. That's so pathetic I don't know where to begin. So innovation in software is obviously something that escapes you. That's your problem. Debacle? When Tech Giants can't figure out how to match iTunes, it shows just how ingenious Apple is.

Was Samsung's funky button-filled cell phones of yesteryear your idea of innovation? Hahahaha. It took Apple to show the industry what smart in smartphones actually meant. We'd still be in the dark ages with cell phones if not for Apple.

I hope that one day we'll actually see real innovation come from the other platforms. It would be refreshing and healthy for the industry. But for now, you're confusing being first with something equating to innovation. That tells me you don't understand innovation at all. Is enlarging a screen innovation? No. Isn't bring back the stylus in it's current form just an old idea resurfaced? Yes. NFC sharing files? That's not an Android concept. That's just what an off-the-shelf technology that Samsung threw into their phones does. Maybe it'll be handy once Google can figure out how to make their Wallet product actually work and gain acceptance. We're still waiting for that to happen (snore).

At the end of the day, I don't think Android fans would stay up all night to own ... well ... anything from Samsung or any other Android maker. No one in the world views feature-overbloat as true innovation.

You say that Apple has lost it's innovative streak? Well, we'll see if that's really true over time. You're confusing a lull in delivering a WoW feature as the end of innovation. Then again, I haven't seen an equivalent to Apple's new iPhone Panaorama camera feature anywhere. For camera buffs, that is a new wow feature. I guess beauty is in the eye of the beholder and why Apple is the number tech company on the planet.

Look what Apple just did. Tim Cook apologized for the pathetic debacle the iMaps was and recommended using Nokia and Google instead. And Apple is getting thrashed at the Wall Street for assuming that it can take its loyal customers for granted. Good luck Apple. This is just the beginning of the end. Apple has lost all its innovative streak. Now, it is just trying to patent innovations that have existed since decades. Look at the flexible display patent. Have we not seen multiple companies demonstrate this functionality several times over in the last 3-4 years at CES?

Steve Jobs should never have trusted this dude with anything to do with Apple. Steve got backstabbed for his pains. Meanwhile this clown is yucking it up and Apple is getting crushed by the idiots on Wall Street who wouldn't know a good product if they fell over one.

The last line in this artical re "Once again, Judas speaks on both sides of his mouth," is dead on. E.S. is indeed a 2faced POS. now he goes on and claims his co. is the innovator? If it weren't for AAPLs ingenuity they woulda had a phone that replicated RIMMs innovation. The last day he was on the aapl board they shoulda teabagged that SOB.

About Schmidt: I'm beginning to believe that this guy probably had everything to do with accelerating the demise in Steve Jobs' health... God knows he makes my own blood boil with his psychotic disingenuous babbling.